The second series of the X-Men to launch under Hickman’s tenure, “Powers of X” is so imaginative it is filled to the brim with new concepts, locations, and situations. A true tour-de-force. 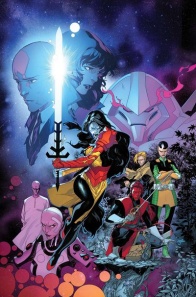 FEAR THE FUTURE Superstar writer Jonathan Hickman (INFINTY, NEW AVENGERS, FF) continues his revolutionary new direction for the X-Men. Intertwining with HOUSE OF X, POWERS OF X reveals the secret past, present and future of mutantkind, changing the way you look at every X-Men story before and after. You do not want to miss the next seminal moment in the history of the X-Men!

Similar to it’s companion mini, “Powers of X” has a certain level of ambition that is not often found in comics. It is not setting out to be a good (even great) story about the X-Men, but rather to reinvigorate the publishing line with fresh concepts, locations, and characters, setting the stage to what can be a new status quo for years, even decades to come. What is most surprising is how encouraging these first issues are, and how successful the entire package is. While the traditional combination of excellent writing and visual storytelling is a big culprit of this success, there are more elements afoot in “Powers of X” #1 that also deserve examination.

First of all, “Powers of X” #1 is not structured in the traditional way readers are used to a comic published by the so-called big two. There are information pages inserted in the middle of the narrative, avoiding any type of exposition in need of being delivered by the characters within the story. Beyond providing much-needed insight to the new concepts and situations this issue presents, it frees up the main story-beats to actual development, action, or dialogue. Readers that want to outright skip them, can, even though they offer a lot of interesting elements of their own, being well-worth the invested time.

Another structural differential of “Powers of X” #1 is how freely it moves across distinct moments in time. Mild spoilers ahead for those most sensitive. The narrative is apparently told in four moments: the recent past, the present, the future and the far-future. While the story jumps around those moments, predominantly between the present and future, there are themes that provide connective tissue among them, with some characters even appearing on multiple time milestones. From a reader´s point-of-view, it feels like experiencing a story centuries in the making, with the audience’s high viewpoint being barely enough to take it all in. At the same time it is a daunting task, but one that is written so well that instead of coming across as hermetic, it feels more like an amazing jigsaw puzzle coming together.

Before dwelling on plot too much, the visual flair that Silva and Gracia present is just beautiful. Credit must also go to Marvel’s editorial for having two artists (Pepe Larraz on “House of X” and R.B. Silva on “Powers of X”) that share more style similarities than differences. What could come across as disjointed among a less harmonic duo, feels very consistent. There are things that Silva does better than Larraz (and vice-versa) which make each book still looks unique, but the sense of continuity and visual identity is kept intact because of that balance.

Where Silva excels on “Powers of X” #1 is on new characters, world design, and action sequences. Especially on the pieces set in the future, Silva seems at home when creating new mutants (Rasputin, Cardinal), new foes (the machine sentinels of this time’s era), and the overall situation of the planet Earth on these different moments. The visual aspects of these characters, the way their body language “speak” are uncanny, and much can be learned from them by their aesthetics alone. In one particular moment, for instance, a foe that readers are very used to seeing behave a certain way pulls a complete 180º and it is told completely visually. No dialogue. No exposition. Just body language.

Back to Hickman’s structure, plot, and script. Perhaps the best compliment that can be said is how truly surprising all that is. When one factors how many fans have been speculating since this relaunch was announced, how many theories are flying out there… and all seem to be mostly wrong or off-base. What Hickman is building is not only new in the sense that it hasn’t been done before… it has not been thought before. That level of world building is truly inspiring, because it rethinks concepts at their core, it builds from a very different starting point, rather than being a divergent path of something that came before. Less “what-if” and more “what’s next?”.

“Powers of X” is also a class in pacing. Writing is sharp at every turn, whether it is moving from time piece to time piece, or lingering for a bit longer for character interaction and dialogue. So much is introduced on this first issue, and yet readers should already feel the connection to some themes and new faces. The tribulations of Rasputin. The stakes for the future. The haunting reality waiting at the turn of the millennium.

Amazingly structured and written, taking all the risks a premiere and vanguard flagship should, “Powers of X” delivers on every note, from beautiful page to sharply written info note. What a time to be a mutant fan.

Final verdict: 9.5 – Uncanny. Amazing. Astonishing. And we are only one issue in.