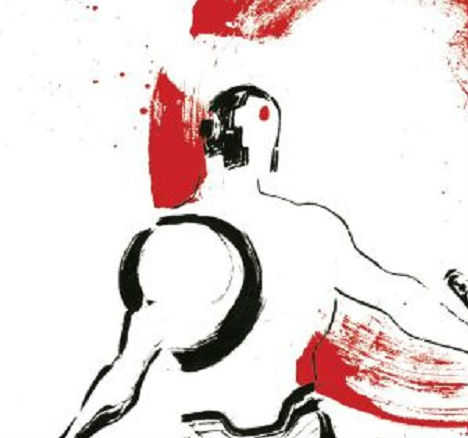 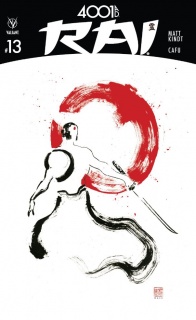 ALL-NEW ARC! ALL-NEW JUMPING-ON POINT! THE BATTLE FOR 4001 A.D. CONTINUES HERE! As 4001 A.D. teeters on the brink, discover the intertwined origins of New Japan’s very first Rai and his creator, Father – the despotic artificial intelligence that would one day threaten us all. And as the truth behind these long-lost beginnings resurfaces, so too will the questions that have eluded mankind for nearly two millennia. How did New Japan come to orbit Earth? Who created Father? And what happened to the nine previous Rai that once swore allegiance to his empire? The architect behind the summer’s most anticipated crossover event, Matt Kindt (DIVINITY II), joins forces with all-star artist CAFU (IMPERIUM) to uncover the never-before-told story of New Japan’s rise to power…and reveals just how the Valiant Universe of today became the 4001 A.D. of tomorrow!

As I was preparing to write this review, I had to think: The only way I can truly talk about this issue is to discuss my thoughts in comparison to “4001 A.D.: X-O Manowar #1”. For those of you who read my review, I felt that it was very average, almost a textbook reading of the events it depicted with little emotionally/character ressonance to it. Something that may have worked if not confined to a one-shot.

The setting is New Japan in 3001 and it is not the glowing metropolitan dystopia that it will become. Over-population, disease, famine and other bad things are causing a load of unrest to the point of people wanting to return to Earth. Crazy, right? Well, Father seems to think so. Which brings me to perhaps the biggest difference between this issue and “X-O”: the narrator. Where the narrator in “X-O” felt a bit impersonal, “Rai” has Father as the narrator.

Yes, the A.I. had more emotional resonance. We listen to him talk about his first thoughts after “awakening” and how providing mere power and basic sustenance is not enough to ensure the safety of New Japan. He needed to be an active provider. He needed something to inspire the people. So, after many failed attempts, he created it. The “Raijin”. The first Rai.

And so, we see New Japan change swiftly over the next five-hundred years as Rai helps build the many different Zones of New Japan for anyone’s wants or to tease nostalgia for old Earth. And it is interesting to watch the “needs” of New Japan change in ways that Father, who is not human, could not comprehend. Change is a major theme in this issue as Father’s own methods need to change with the times. Seeing the first Rai, who was made from a human child, go through this realization is an unfortunate thing, someone who was instilled with a purpose by Father but never truly could change on his own.

CAFU and colorist Dave Lanphear do a good job depicting a kind of “Proto-New Japan”. Not what we have been used to seeing when Clayton Crain was on the book, but well on its way. A mixture of the science fiction structures and the less technologically advanced sections of the city. Little details like the long line for “Pseudo-Bread” help visually reinforce the squalor and barely liveable state of New Japan. Lanphear’s coloring almost adds a painted quality to the work, something between more animated/cartoon work and photo-realism. There is one scene when the soon-to-be first Rai is pulled into a lake of Livewire (the nano-esque material that is the lifeblood of Father) where he acquires his power from Father and it’s very reminiscent of another boy that gains his power from a bolt of lightning.

Speaking of the first Rai, the art team manages to toe that line between cheerful and adorable boy and creepy and inhuman, not unlike the first Positrons we see developed in this issue. It is clear how such creations would spark distrust among some of the people of New Japan and the breaking out of conflict that would come to a head in 4001. The art team doesn’t pull punches when Rai tries to confront the first groups of “Raddies”. As I mentioned: this Rai was meant to build and inspire, not for combat and the viciousness that the Raddies unleash on Rai is a bit unnerving to watch, considering all the while Rai doesn’t understand why they’re attacking him.

I have said that tie-ins can actually be good and that they can help enhance the story going on in the main event. Where “X-O” kind of faulted on this in trying to establish an emotional tether for the reader, “Rai #13” does a better job to a degree. There is a degree of familiarity in Father’s establishing his own sentience, how he carries out his purpose and even the emotion and detachment in facing his own failings. If you are a read a great degree of sci-fi dealing with artificial intelligence, some of these tropes can seem a bit familiar, even if it is a relief that Father’s immediate reaction isn’t to genocide the whole population. There is enough to keep the interest and it does a far better job of “showing” us the history of New Japan than “X-O”’s tie-in had.

Perhaps it’s because Kindt has built the New Japan world since it’s return to the Valiant Universe, but this book geld better with the event both on a narrative and emotional level. While it’s not necessary at all to understand the going ons in “4001 A.D.”, it is a decent enough supplemental material.

Final Verdict: 6.9- A much better look into the history of New Japan that works well as a companion to “4001 A.D.”