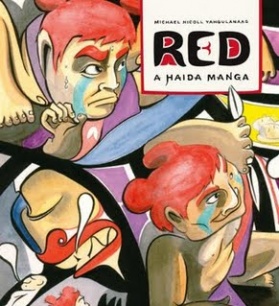 An innovative graphic novel, Red is the epic tale of a Haida hero, his rage and his quest for retribution.

Referencing a classic Haida oral narrative, this stunning full-colour graphic novel documents the powerful story of Red, a leader so blinded by revenge that he leads his community to the brink of war and destruction.

Set in the islands off the northwest coast of B.C., it tells the tale of orphan Red and his sister, Jaada. When raiders attack their village, Red, still a boy, escapes dramatically. But Jaada is whisked away. The loss of Jaada breeds a seething anger, and Red sets out to find his sister and exact revenge on her captors.

Red blends traditional Haida imagery into a Japanese manga-styled story. Tragic and timeless, it is reminiscent of such classic stories as Oedipus Rex, Macbeth and King Lear.

This innovation in contemporary storytelling consists of 108 pages of hand-painted illustrations. When arranged in a specific order, the panels of the narrative create a Haida formline image four metres long. The sequence for this complex design is displayed on the inside jacket.

From its cryptic opening words (“Once upon a time this was a true story…”), “Red: A Haida Manga” promises a challenging read. Just flipping through the square, colourful volume is both exciting and exhausting. The exuberance of Yahgulanaas’s art style is gosbmacking, and the sheer potential of the manga/Haida fusion overwhelms.

This said, it’s delightfully difficult to pick out what’s Haida and what’s manga. The fusion is complete and extravagant: Yahgulanaas’s art is flowy, melty, with washes of watercolour set off by bold black lines. Colourful faces warp and bend, turning to profile but showing you both eyes, filling whole panels then shrinking to insignificance. Backgrounds are scarce, with the characters usually filling the frame, but when they do appear they’re soft, remote. The formlines – the bold contours that make up Haida art – act as panel borders, carving curved shapes into the action.

It’s in the facial expressions that “Red” is most playful. Young Red is mischievous, almost impish, and when he escapes a neighboring village’s raiders, this strong sense of his personality makes for a suspenseful first action scene. Here, as everywhere, colour plays an integral role: Red’s signature shade sets him off from the shady blues of the forest, and from the grey and grotesque faces of the raiders.

His sister captured, Red grows up before our eyes, vowing revenge. In terms of story, it’s this middle section of the book that’s most interesting, with Red convincing his village to stockpile weapons – a move which changes the atmosphere of their community drastically. An outcast weapons dealer helps them build a machine of war, and in a confrontation rife with misunderstandings, they use the machine to try to recapture Red’s sister.

It’s at this point – where the mechanics of the machine play a critical role – that the bold, conceptual layouts work against the story. The curved panel borders make determining the order of events difficult; they also blend into the art itself, making it hard to see where one panel ends and the other begins. It’s nothing a little extra attention can’t remedy, but the result is a loss of momentum when the story should be at its most exciting. This said, the high stakes – and tragic end – ensure the meaning of Red’s story hits home.

When you think it’s all over, a spread at the end reveals all the pages can be assembled into a mural; the layouts join to create a larger motif. Yahgulanaas’s end note encourages you to buy two copies and recreate the mural – so if you’re not squeamish about cutting books, a four-metre-wide masterpiece is in your reach. This is just a piece: 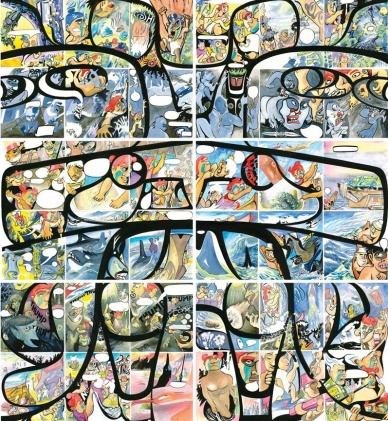 “Red: A Haida Manga” delivers what the title promises – a thrilling fusion of styles. The nuts and bolts of the story might not come through as clearly as they could, but when something takes this charismatic a hold of your visual cortex, it’s hard to complain. And the story, once sifted through, is all the more powerful, underscoring the startling power of fear.