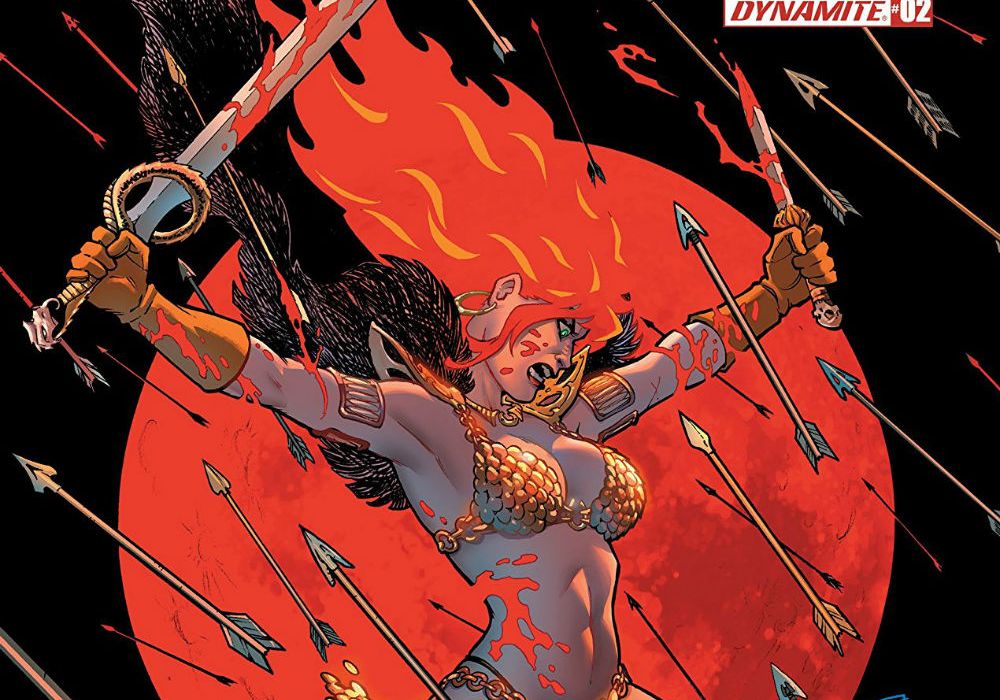 Hear, O Prince, of the tale of the Hyrkanian devil. Hear how she became Queen of the mud, of the dust, and the treacherous. Feel the laughter that flows through these pages, for underestimating the devil is what leads to a long stay in hell. 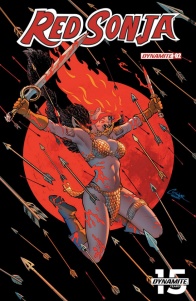 THE SHE-DEVIL WITH A SWORD IS QUEEN OF HYRKANIA! LONG MAY SHE REIGN!

Dragan The Magnificent marches his massive Zamoran army to do battle with Sonja’s puny Hyrkanian forces. Any other monarch would retreat in cowardly fear. But Sonja will rely on the lessons she learned at THE COURT OF THE KHITAI, and empty her nephew Kryon’s BROTHERS OF MISFORTUNE. . .

The epic ongoing continues, by MARK RUSSELL (The Flintstones, The Wonder Twins) and MIRKO COLAK (Conan).

Not as tightly packed with humor as its inaugural issue, “Red Sonja” #2 chooses instead to show us a different side to the Hyrkanian who does not want to be Queen, as well as the world around her. This is a series about war and empire. About the folly of kings, about the quest for power, and the never ending thirst that expansion brings for more, more, more. Russell is adept at satire, deftly weaving it into the core of his licensed works, and “Red Sonja” has proven no different.

Much as with “Exit Stage Left,” here he uses his satire to craft a mostly serious tone, choosing to cut the humor with the severity of Sonja’s situation and the harshness of the Hyborian Age. The violence is harsh, bodies pile up, and, while the blood is kept minimal, the damage is no less impactful. There is humor, almost all of it coming from and at the expense of the king of Zamoran, and it all hits beautifully, but this is not a world that tolerates humor in large doses, a sentiment that is reflected through Colak’s grizzled portraits of the Hyrkanians and the surrounding lands. They are harsh and dusty looking, thanks to additional inking lines one faces and clothes, but more so thanks to Kelly’s coloring choices.

There are few solid colors outside of Sonja’s hair; all are tinted and peppered with yellows and browns, creating the lighting effects but also subtly showing the dirt and grime of a location or a piece of clothing without making it too obvious. Additionally, the dark and somewhat washed-out green & brown palate choice for the Hyrkanians contrasts nicely with the brighter and more varied colors of the Zamoran empire. Who has all the wealth and power is conveyed and reinforced through these colors, making Sonja’s hair stand out all the more, signaling not only her importance to the story but also her power.

In this, “Red Sonja” #2 is concerned with complicating the narrative presented in the first issue, namely that of the might of the Zamoran empire and the weakness of the Hyrkanian people. Consider the presentation of the environments. There is beauty in the natural and built environments of Hyrkanian that was not apparent last issue. There are still plenty of run down houses made of sticks and tarps as compared to the sprawling stone cities of the capital of the Zamoran empire but it is a far cry from last issue’s presentation of the land, which was muddy and dirty and filled with spineless citizens.

That said, “Red Sonja” #2 is not without its faults, although they are quite minor. Firstly, the comic’s end comes fairly abruptly, complete with the feeling that there should have been one more page to act as a denouement to the events of the second to last page.

Additionally, Colak’s artwork can be stiff at times, especially when it comes to faces. This is where Otsmane-Elhaou’s lettering & balloon. . .ing comes in to shine. While much of it is fairly unobtrusive, his thin tailed balloons have a character to them, expanding it’s top half with jagged edges to indicate the forcefulness of only the first half of an exclamation or sneaking around a corner door. His sound effects are as much a part of the scenes as the artwork and coloring, indicating not only the onomatopoeic noises of the battles and cries, but also their relative positions to the comic’s POV.

If what the sound is indicating is loud and coming from behind a wall of bodies, it will be partially obscured by them. If the crackling of a bridge on fire is fighting with the sound of a man being crushed and burnt, the tail of that man’s balloon snakes behind and then in front of the fire sound. There is even a bit of comedy to them, such as the panel where Kryon exclaims so loudly to Sonja, that their conversation has to take place above the highest buildings of the town, yet is represented instead by towering balloons connected via tiny tails.

Another nice touch is the map page showing the army forces. It has the appearance of an ancient map, complete with a pseudo-script font, and clearly abstracts the two armies so that not only are their sizes compared, but also their organization, driving home just how outnumbered Sonja and her forces are before the second half of the issue. If issue #1 was all about showing how screwed Sonja is, issue #2 is all about showing just how wrong assumption are when it comes to her.

Final Score: 8.8. – “Red Sonja” #2 is a strong book thanks to the interplay between members of its creative team, deserving its place among the great “Red Sonja” runs. Humorous and biting but serious enough for the world the characters inhabit, it’s clear this team understands Sonja.