Blood falls in the past and present in “Red Sonja” #4. 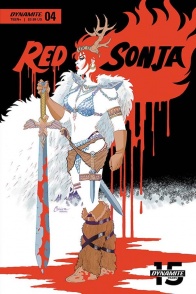 “The Brothers Of Misfortune”

The Zamoran Empire musters a fleet of war chariots to rush arms and provisions to the front line. Hyrkania would be lost, were they not led by Sonja The Red, who knows it is not enough to know one’s own strength, but to understand the strengths, and weaknesses, of one’s opponents.

To move forward with the plot of “Red Sonja,” Mark Russell looks both to the past and the present. In doing so, he expands on the character of Sonja the Red herself while simultaneously showcasing elements of her world. In doing so, he also addresses two key themes: belonging and the conflict between strength and intelligence.

On the one hand, we have an expansion of what it means to be one of the Brothers of Misfortune, the mercenary company led by her cousin Kryon, as well as showcasing them in action. By spending an extended time out of combat, Russell allows readers to see points where the heroine’s vast experience with close quarters combat is simply not enough in an age of open warfare. While she may excel in that area, the art of decoys and ambushes that work well for her cousin are a relatively new experience, thereby providing the focus on the aforementioned sell-swords. Furthermore, by focusing in on the Brothers and their slower, more methodical processes of fighting an invading force, Russell is able to give brief histories of each one in roughly a panel or so each, demonstrating their eponymous “misfortunes” without drudging the story in each of them too much either.

With how much Sonja is out of her element in the role of the Red Queen, Russell is able to focus in on the sense of belonging, or lack thereof. After so long away from Hyrkania, and having been given such a high authority at nearly complete random from her perspective, the She-Devil has time to dwell on her problems as a leader. In the midst of combat she can feel she belongs, especially in the flashback to happier days, but in the proverbial chess game of war she is still learning her way, relying on others to help. Furthermore, she is a stranger in a formerly familiar land, as she does not even recognize her homeland any longer, to her dismay. Far from the tough woman others would assume to be Sonja the Red, this vulnerability helps to showcase some humanity under the thick skin she developed, and thereby helps Russell to keep her relatable to readers. In the circumstances presented to her by the war with the Zamoran Empire, she cannot be a warrior who lives for the fight alone; as a queen, she must be a soldier and a general, fighting in order to help others live.

While the deep sadness can pervade elements of Sonja’s side of the story, Russell keeps a sizable amount of humor for the villain’s part of the plot. Emperor Dragan the Magnificent is a formidable foe with a vast network of vassals, but he is also a rather ridiculous antagonist who can switch to black comedy at complete random in the middle of a tense scenario. For example, he may be having someone tortured, then stop the torture to hear something going on with his advisors, only to tell the torturer he can continue afterwards as if he were simply pausing and resuming a television program in the modern day. In most circumstances, the whiplash would be horrifying, but Russell’s writing keeps Dragan’s antics with an air of comedy in spite of everything else.

“Red Sonja” #4 brings a secondary artist to the table on both illustration and coloring: Bob Q. Q has been working on the “seduction” variant covers for some time now, and his smooth, thin pencils and cool colors show why that is the case. All of the artwork is portrayed as highly realistic, with emphasis on thick musculature, intricate posture, and detailed faces to the point of seeing the fear, anger, or at times agony on each person’s face. With the cooler color palette, Q is able to show a time in which Sonja the Red is internally at peace, even if she is actually in the midst of a combat exercise, while also showing, through the thin details, how she personally sees the world with intense focus.

Otherwise, the vast majority of the artwork in “Red Sonja” #4 is provided by Mirko Colak, much like that of previous issues. Colak’s style has a bit of a cartoonish air to it, being from the perspective of an impersonal camera rather than from one person or another’s point of view. In doing so, Colak helps to showcase Sonja as becoming a part of life in Hyrkania, in contrast to her relatively solitary life for the most part. At times, Colak even experiments with panel structure, such as a tilted image to show a character’s disorientation (following with Hassan Otsmane-Elhaou’s lettering at the same angle).

Dearbhla Kelly’s bright colors in the harsh sun help to show the violence and the warmth of the present, not to mention the fickle nature of the likes of Dragan when contrasted against the cool certainty of Sonja’s more directly violent, but predictable past.