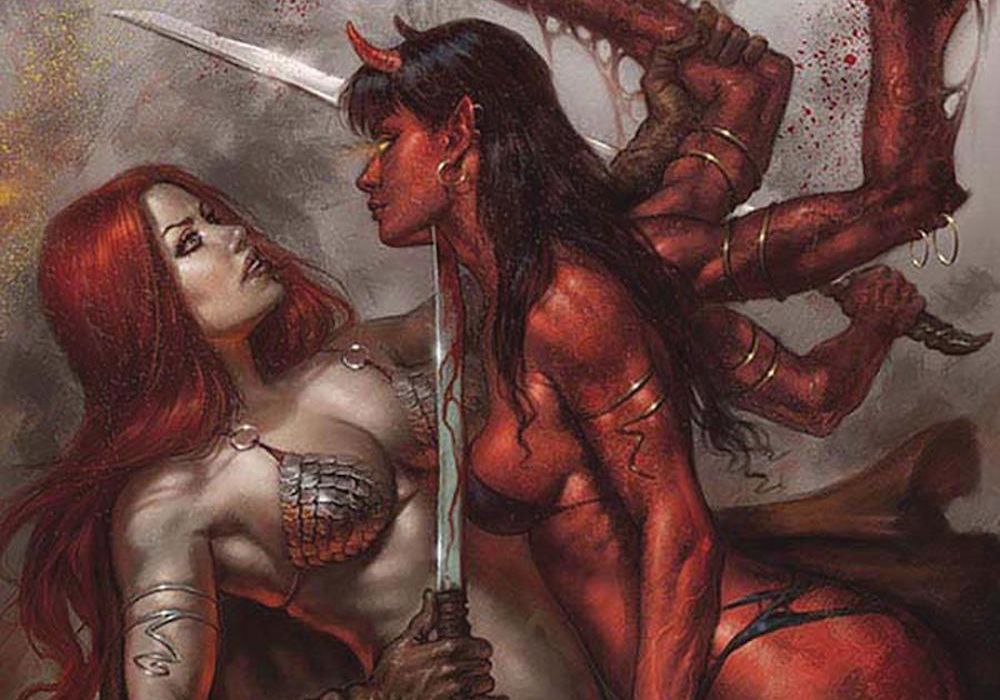 From fangs and swords to vampires and sorcerers, there is quite a lot to enjoy in the first installment of the crossover between “Red Sonja” and several of people from the urban fantasy of “Chaos! Comics.” 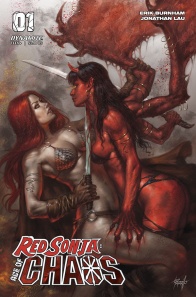 The past meets the present with the future of literally everything at stake! The warrior Red Sonja has a plan to keep freshly killed wizard Kulan Gath from resurrecting himself again — but when the plan backfires, it allows a whole new kind of Chaos! to infest the Hyborean Age! Will these new beings be any easier to deal with than Kulan Gath, or has Sonja called a worse evil to her world? It’s the first chapter of a brand-new quest for the She-Devil – and it may be her hardest yet as for the first time ever, Red Sonja meets the badass characters of Chaos!

Dynamite Entertainment is in no way a stranger to crossovers between its various licensed properties, especially where they typically have no connection between them. Like many other writers of these mash-ups, Erik Burnham has the responsibility to handle two wildly disparate tones and versions of series lore in an attempt to make a cohesive whole. Rather than struggle, Burnham appears to take to it as a natural, with “Red Sonja: Age of Chaos” #1 showing a mastery of character and storytelling overall which feels so perfect and seemingly effortless that it could be perceived as the sorcery of Kulan Gath all on its own.

From the Hyborean Age to the modern day, Burnham takes two different styles in terms of introducing the players for this proverbial cross-franchise game, with the narration in particular emphasizing the very different ways in which the era of swords and sorcery inhabited by Red Sonja compare to and contrast against the urban fantasy universe of “Chaos!” and its various supernatural creatures.

With the Hyborean Age, Burnham provides narration from within the story itself, as Mistress Hel of “Chaos!” talks about the important elements of the premise and its connections to the modern era. The method of explanation brings to mind a bard in a tavern regaling an audience with tales of heroic victory, all filled with drama and mystique while denoting the negative impressions of magic as explored within that style of story as far back as Robert E. Howard himself, if not earlier.

By contrast, Burnham uses a far more typical “introduction box” style for an external narrator for the modern “Chaos!” characters’ time period, with short descriptions of who’s who as they appear, along with an occasional humorous aside such as meaningless introductions for one-panel characters like someone identified as “Roger Something” who even the very introductory box notes is meaningless to the story itself. This kind of explanation both elicits a laugh from readers and focuses in on the sheer diversity of the species and individuals presented, simultaneously demonstrating the speed of modern comics and providing the bare essentials as far as information for newcomers to “Chaos!” (or at least to some of the characters within it) to understand and have fun with the story as it is told. What isn’t told in the short introductory boxes can be easily gleaned from the interactions between the various characters in the melee that takes center stage of this debut, helping to play to the characters’ strengths while also being a fully justified “let’s you and him fight” scenario as is common in comic books in general. Furthermore, the differences in storytelling emphasize the very different role that magic plays in one world versus another, as while many worry about its power around Red Sonja, it is used liberally and on multiple sides, whether or not the user has any idea what they are doing or how it may affect things, in the modern age.

Jonathan Lau provides a very interesting art style to “Red Sonja: Age of Chaos” #1, emphasizing the way that individual people would actually look as opposed to any idealization. On the one hand, we have Red Sonja herself, who has some emphasis on her age lines and wild hair as opposed to seeming relatively pristine despite anything happening. Similarly, while Kulan Gath and various vampires and related beings all seem to be bereft of any aging due to supernatural means, the same cannot be said for Evil Ernie, who Lau draws in such a way that “Hell’s hitman” resembles a walking corpse in far more detail than many other artists would dare, almost seeming to be rotting in some panels in spite of his arcane energy. This level of rot is pushed in stark contrast to not only those mentioned, but also against another youthful-looking figure who shows up and is not supernaturally empowered, thereby indicating their own actual youth and implying the relative inexperience with the situation that is shown rather readily in short order.

On top of the depiction of age and its relationship with the supernatural, Lau also shows a high degree of skill with the use of shadows, from the seemingly alluring shade of a mere eyebrow to an excellent use of negative space around Mistress Hel to make her appear to have come into the scene out of nothing at all, or that the setting itself formed around her afterwards. Furthermore, the use of shade further aids in showcasing the effects of age and stress on a body, in particular with close-ups of Red Sonja’s face.

Celeste Woods does a marvelous job with the colors throughout “Red Sonja: Age of Chaos” #1. Emphasizing the shade already provided by Lau, she simultaneously concentrates in on the two different tones in her manipulation of the light sources. The direction from which light is shown is always perfectly evident, be it white from lightning crashing across a stormy sky, a calm orange waving across someone from a sunset, or others beyond. Meanwhile, varied hues and tones concentrate in on individual characters, from the grey-green of Mistress Hel’s skin to the yellow-green of Evil Ernie to the black and red associated with Purgatori and more beyond. In the face of the associated colors, others such as an ethereal blue stand out as unnatural and filled with mysticism when they show up, and a sudden flash of nothing but purest white is all the more shocking when it interrupts the flow of a running battle. At times, there is no color at all in the black backgrounds, drawing all attention away from even the idea of color beyond that of the principle figures of a panel to focus in on the well-lain hues present inside of the violent action already shown.

Final Verdict: 8.0– Even if readers have no experience with the Hyborean Age of “Red Sonja” or the peoples of “Chaos! Comics,” this debut is sure to interest quite a lot of people who enjoy crossovers of modernity with swords and sorcery.