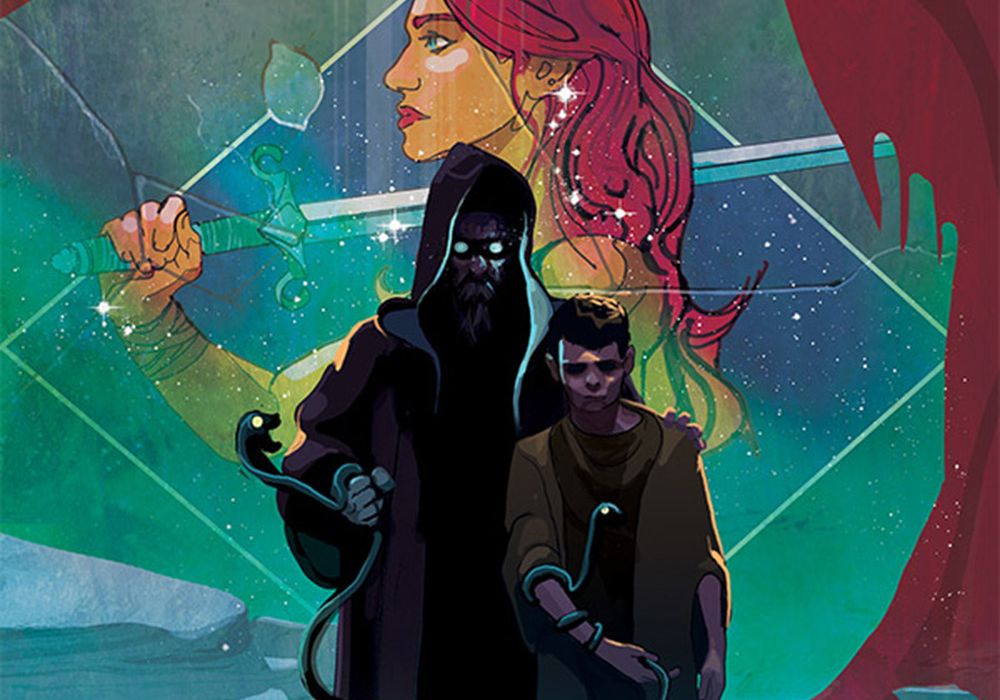 Red Sonja continues to fight against the Zamoran Empire in her latest series, but there are multiple players in this war. As such, this one-shot gives us a look at some side characters, sets up what could be important plot points, and gives us some compelling mythology. 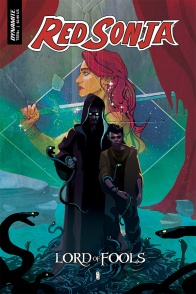 THIRTY pages of story, tying directly into the aftermath of RED SONJA #6! As the battle wages in Hyrkania…CYRIL is the Crown Prince of the Zamoran Empire, and he is young but not stupid. The mysterious blind priest will unlock the secrets of The Lord Of Fools…Cyril will learn his fate, and what it will mean for the known world…

While the issue itself is called “Red Sonja: Lord of Fools,” the comic features two stories: “Lord of Fools” and “Bread and Cerkuses.” Both are written by Mark Russell, but illustrations shift between Bob Q and Katie O’Meara, with Dearbhla Kelly maintaining consistency through the use of colors.

The first story itself contains a few key aspects. First, we learn about Dragan’s wife and there lack of a happy relationship. Her disdain and his casual apathy come through in their dialogue well, while the flashbacks make us sympathetic towards the empress. We also learn more about Dragan’s son, Cyril, who seems more level-headed than his father but still cares for his world-conquering dad and takes his lessons to heart. Revelations that happen later in the comic provide him with a good deal of depth, and bring up questions about family and love.

At the same time, we’re introduced to the oracon who gave Dragan the prophecy that he “would die the moment the Zamoran Empire stopped expanding” (a prophecy which will almost certainly end up as “the Zamoran Empire stops expanding the moment he dies, most likely at Sonja’s hands” but that’s beside the point). His role grows in the comic, with two twists – one easy to predict, another that’s a nice tie-in to the mythology.

While these are all key characters, whose role in the comics will likely expand as the series progresses, the most interesting part of “Red Sonja: Lord of Fools” is the tale of the Lord of Fools himself. This introduces readers to the Zamoran mythology, which is a great example of mythos building.

By placing the Lord of Fools as the lowest of deities, but the one in charge of the humans, we’re given a small idea of humanity’s place in this comic’s universe. As the story leads the readers through to meet greater and greater gods, each one made even more insignificant by the presence of the next, we get a scale for how truly tiny and unimportant humans are in the grand scheme of this comic’s cosmos. The story brings it around well by ending it with countless world conquerers reincarnated as ants, nailing in the sheer scale of the mythology.

There’s something almost Lovecraftian about how humanity is when viewed in comparison to the gods in this comic (only without any of H.P. Lovecraft’s racism). The immensity and power of these ambivalent deities, whose lowest echelons could destroy the world with but a blink, invokes a similar kind of primal horror in characters as they realize how meaningless and small they are in the grand scheme of things.

When one learns that their entire planet is a speck of dust in the eye of a creature that sits on the tongue of a massive snake, which is in turn a hair on the head of an even greater deity… it puts things in perspective.

The second part focuses on Cerkus, the Speaker of Truths. He was introduced as a member of Red Sonja’s royal council, whether she liked it or not, for being the most honest man in Hyrkania. This part of the issue provides us with his backstory, and how people aren’t always open to the truth.

Like the tale of the Lord of Fools, this story has all the makings of a good fable. Cerkus’s compulsion to find and speak the truth gets him in more than a little bit of trouble, leaving readers to decide for themselves whether they prefer the truth or a comforting falsehood.

In fact, it includes its own story within a story, which connects to the overarching theme well. It’s a goof use of storytelling, backed up by a shift in illustrations that makes it look like a story illustrated on ancient scrolls.

In both parts of the story, the artwork provides solid designs for the characters and scenery. Dragan himself is very expressive in the few scenes he gets, such as when he’s talking to his son or thinking about conquest. The palace in Shadizar and the surrounding crowd are drawn in great detail, and we get one excellent use of narration and visuals contrasting and enhancing each other as Cyril and the oracon talk to each other in caption boxes while Sonja lights her cousin’s funeral pyre.

Perhaps the most compelling artwork comes through during the telling of the tale of the Lord of Fools. This is where we get some fascinating designs. The Lord of Fools himself is a great mix of jester and lord, with an entirely blank face. But as the deities grow more intense, so do their designs. For instance, Tymor, the Creator, is an angelic being with four golden wings, each with an eye set upon it. Those are the eyes that blink, as his own face has none. But the more gods we see, the more space each one fills on the page, hammering in their immensity and incomprehensible scale as the emperor seeing them grows smaller and smaller in stature and stance.

The visual elements enhance the story immensely, taking on a cinematic quality as they end on a blind emperor surrounded by ants. While the rest of the comic’s art remains equally solid, with great shading and color work to make each character pop and feel alive, the flashbacks and stories are the most engaging visually.

“Red Sonja: Lord of Fools” may provide important character beats and revelations that will be important in the upcoming issues of the comic, but on it’s own, it’s still very enjoyable. The characters have compelling backstories and the mythos it introduces is very interesting. This can serve as a good way to introduce new readers to the Red Sonja comics, or provide extra depths for those who currently love it.

Final Verdict: 7.5 – A very solid addition to the “Red Sonja” comics, with impressive artwork, great character building, and a great mythology behind it.