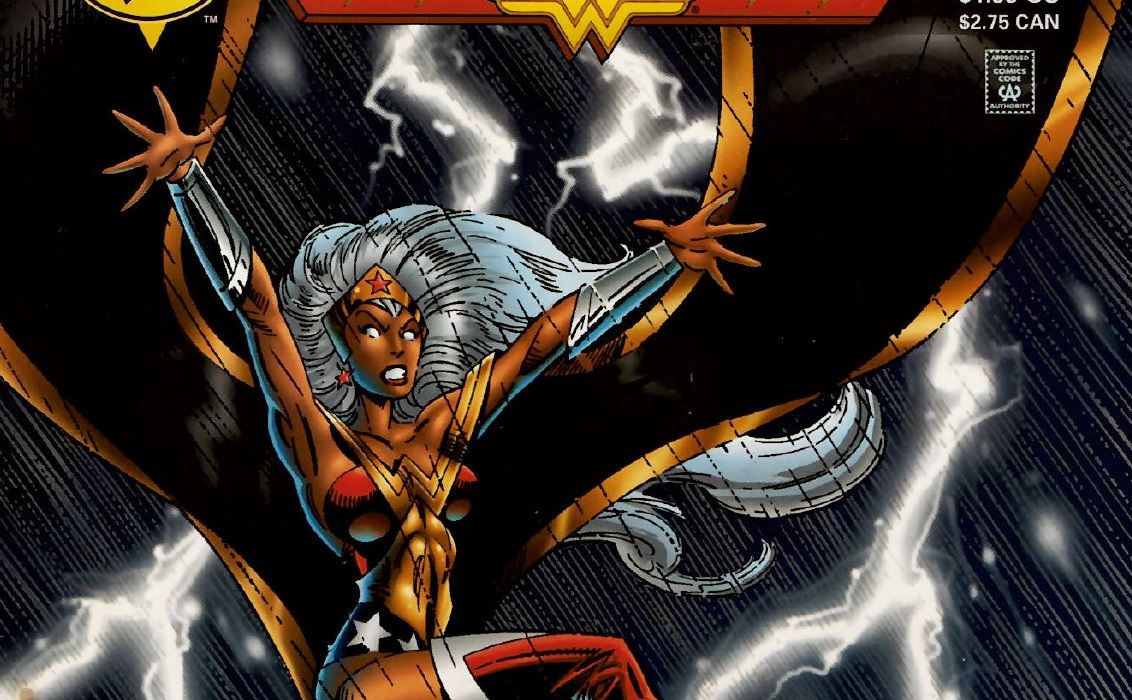 The next pit stop on the Summer trip through the Amalgam titles is “Amazon”, the first real dud I’ve come across. I expected some of these would be confusing, but I never anticipated one to be boring.

The Mash Up
As a child, Ororo Monroe was shipwrecked on Paradise Island. Raised as an Amazon, she learned to control her mutant powers and became Storm, Wonder Woman. This issue is presented as a new series launching out of the conclusion of a long-running team book and a miniseries that saw Storm defend her right to the Wonder Woman title from Diana Prince, fellow Amazon and the Punisher’s wife. John Byrne wrote and drew the issue with Terry Austin inking.

The issue was published by DC Comics, and until now I thought I’d have to check the indicia to see which Amalgams were published by which company. Turns out there’s a more obvious way: DC put the creator names on the cover, and Marvel didn’t. 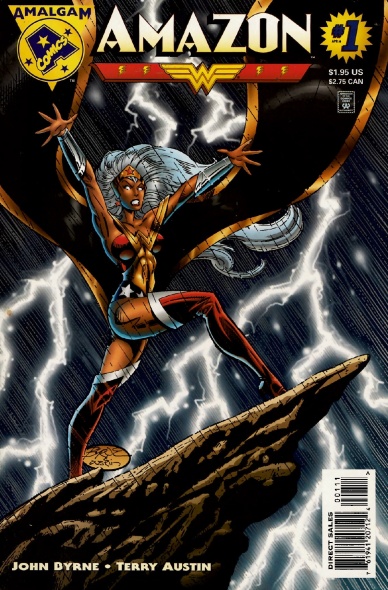 Plot
Storm’s flying over the ocean through a storm she can’t control, and lighting causes her to fall into the water. Or maybe it was wind? I couldn’t really tell. Something happened, and we get our first flashback. It shows that the storm was created by Poseidon for some reason. He appears mad at Storm. I think he was trying to show that he was more powerful than her. She zaps him with lightning, then he raises the hurricane force that pushed her underwater.

Now that she’s underwater, we get the second flashback: she almost drowned as a child, and now she’s scared of it. This is probably supposed to be a play on the Marvel Universe Storm’s claustrophobia, but I think anyone who found themselves underwater in the middle of the ocean might panic. The flashback ends as Storm is thrown out of the sea into an underground cavern filled with treasure. It’s Poseidon’s throne room.

Meanwhile, in a subplot “across a space measured by more than merely time and distance”, aka Louisiana, two nosy neighbors open Storm’s apartment door and find Diana in rough shape. Who’s Diana? Who cares, the subplot’s over.

Storm walks through the treasure room and picks up a piece she’s seen before. Cue flashback #3, where we see her see the piece on a desk. Poseidon interrupts this flashback to accuse Storm of being a thief because she picked up something in the treasure room he cast her into. Storm points out how dumb this is, so Poseidon calls her a liar and reveals that he caused the shipwreck that killed her parents and sent her to Paradise Island. Cue flashback #4, where a teenage Ororo is told by her adopted family that she’s adopted. Cue flashback #5, which I kid you not, occurs inside flashback #4 and shows the Amazons rescuing Storm. We return to the present for one panel before Poseidon launches into another freaking flashback to explain why he sank the ship.

Unimpressed by Poseidon’s explanation, Storm calls him foolish. He gets mad and decides to kill her, so she’s suddenly wrapped up by sentient seaweed (I think?).

The seaweed hurts her somehow, but Storm calls him a fool again. He calms down and asks her why he’s a fool. The answer, of course, requires a seventh flashback. I’m not going to recount it because this plot summary is already too long, but basically Storm tells Poseidon that he’s petty. Stunned speechless by this revelation, Poseidon lets her go.

What “Wizard” Thought Then
The concept was great and it was from a great creative team. Ergo, this one would be a good investment for later resale. In fact, this one had so much potential it was expected to bleed over into “Bullets & Bracelets”, so buy both.

What I Think Now
Good Lord, what a disappointment.

This was given to Byrne as an assignment, but he says everything outside of “Storm as Wonder Woman” was up to him. He also said he was unsure about the concept when he started, but that he had fun with it. I’m glad someone did.

Whereas the other Amalgams I’ve read so far have felt too big for their one-shot, this one feels hollow. Storm is sucked underwater, tells the god of the sea that he’s wrong, and he lets her go. At the end of the issue, she’s saved no one and accomplished nothing. She now knows Poseidon sank the ship, but it’s clear from the numerous flashbacks that she never suspected foul play. The reason was to get revenge on another passenger, so this doesn’t really change anything for Storm. Amalgam issues are supposed to be snapshots of the best stories available, and this feels like filler.

The artwork is excellent panel by panel, but Byrne’s capable better storytelling than this. There’s no reason I should be guessing about what causes Storm to fall here: 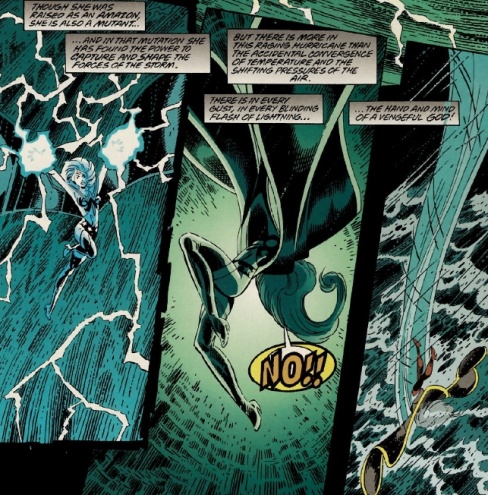 I want to end on a positive note, so I’ll share this panel from the otherwise useless subplot in Louisiana. The little details in Ororo’s apartment aren’t remarked upon, but the addition of the hair brush by the door, the statue in the corner, and the scroll on the table are emblematic of the thoughtfulness I wanted from the whole issue. And maybe I’m just weird, but the bird’s eye view of the ceiling light pleases me a lot. 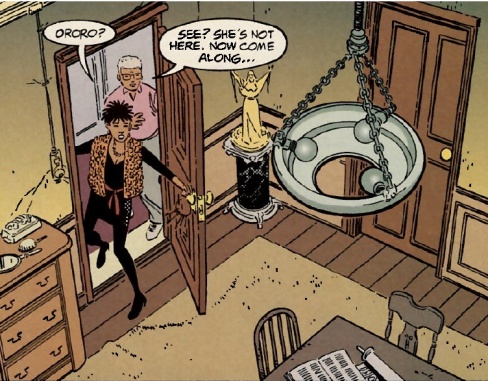