For the briefest of moments in 1996, Amalgam Comics was the most popular comic book publisher in North America. In its debut week, it released twelve new number ones. All of them did well in sales, with eleven making it into Diamond’s top 20 sellers, and five of those making it into the top 10. A trading card set introduced rabid fans to more characters that had not yet appeared, or had only made cameos. Fans were abuzz, talking about the possibilities. And then it was gone.

In the build up to Amalgam Comics, another highly anticipated event was taking place: the four-issue limited series known alternately as “Marvel vs DC” and “DC vs Marvel”. In the first three issues of that miniseries, the two companies’ universes met and fought each other. It was exciting, but the creators behind the project (Ron Marz, Peter David, Mike Carlin, Mark Gruenwald) felt that readers had seen the premise before. This mini was larger in scope, but otherwise it was just another crossover like “Batman/Punisher” or “X-Men/Teen Titans”. Therefore, at the end of the third issue, they decided to do something unexpected and smashed the two universes together to create a new one: Amalgam.

The week of February 28, 1996, DC and Marvel each published six issues under the Amalgam banner. These twelve issues were the only output from the publishers that week. Each issue was a #1 and starred at least one character like Dark Claw, who was half Wolverine and half Batman: 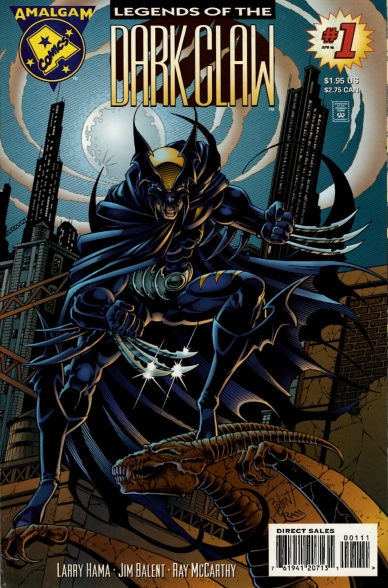 The conceit was simple and flexible: in these issues, writers pretended the Amalgam Universe had always existed, and was the only one that had existed. Some issues were billed as relaunches, some as new ongoings for new teams, and the adjectiveless “Spider-Boy” was billed as the fourth monthly series for the popular hero. Some issues included letter columns that discussed “previous” and “upcoming” stories, others included editorial comments reminding readers that the event mentioned in the dialogue happened in “Outrageous Spider-Boy” #27. Only one, “Doctor Strangefate”, related in any way to the “DC vs Marvel” crossover.

It was a surprise, it was fun, and it was temporary. The popular magazine for comic readers, “Wizard”, devoted several pages to the event prior to release, and its fan art department devoted an entire segment to dream combinations. A couple of the one-shots were popular enough to appear in their list of Top Ten back issues. For two months, the market watch column reported that Amalgams were hot and desirable. In the third month, a small item noted they were “cooling off” and speculated the cause was a lack of news about a sequel.

Of course, the creators involved had always been clear that this was a one-time thing. The one-shots were spun out of a miniseries, and when the miniseries ended the Amalgam universe was destroyed. Besides, many of the creative teams only agreed to do it because there was no long term commitment. They were instructed not to hold anything back because there would be no issue two.

Except everyone knew it might be successful, and a plot device was left in place to allow for a return. That return happened about a year later, the week of April 1, 1997. There was another miniseries involved (“All Access”), but it was less high-profile than “Marvel vs DC” and didn’t have any plot connection to frame the concept. In fact, “All Access” was already over by the time the second batch of Amalgam hit shelves. Orders were high for most of them, and they took slots 6-11 on the month’s top 100 chart. Overall, retailers reported interest was down among readers. There was no third wave.

But were the Amalgam issues any good?

I was young and uninformed when the books were new. I thought the company was “AM uhl GAM” and called it that right up until I had a cavity filled years later with “Uh MAL Gum”. The only one I read at the time was “Iron Lantern” from wave two. I liked it a lot, but as a loyal reader of “Sonic the Hedgehog” and “Teenage Mutant Ninja Turtles Adventures”, I knew mostly nothing about Iron Man or Green Lantern. Any in-jokes were lost on me, and I remember putting a non-zero amount of effort into trying to find issue two before a friend filled me in on the concept. 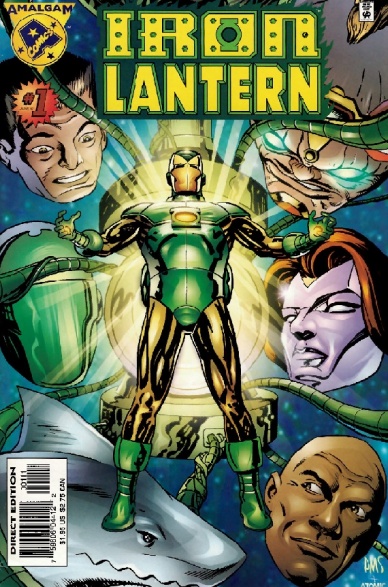 I never forgot “Iron Lantern”. I read that book to tatters. Last year, I spent a good chunk of my summer doing retro reviews of “Wizard”. The run I examined happened to coincide with the first wave of Amalgam, and I started wondering if “Iron Lantern” was as really as good as I thought it was. On the off chance it was, what about the other Amalgams that I never read?

This summer, I’m going to look back at this bizarre crossover one issue at a time. I don’t really know what to expect – there are several that I still have no bearings on. For example, I’ve never read “Generation X” or “Jonah Hex”, so I know full well that several things in
“Generation Hex” will go over my head. I’ll be doing my best to judge these books on their own merits, with the ultimate deciding factor on their quality being how much I want a second issue.

Here’s a quick rundown of the issues I’ll be reviewing. I’ll add links to the titles as reviews are completed, and I’ll summarize my findings at the end.