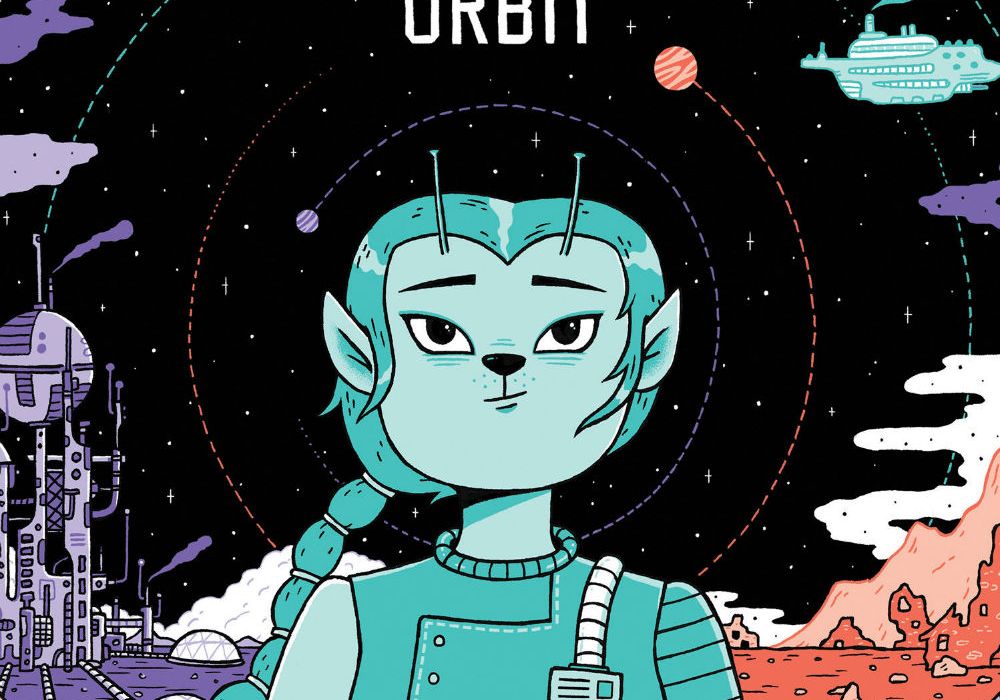 Humanistic in tone, though featuring entirely aliens, “Retrograde Orbit” takes us on a coming-of-age journey through the life of Flint, a Doman living on the planet Tisa, in a far off galaxy that is all at once familiar and distant. This is the story of her quest for home, for peace, and for creating a life that she wants to live, not one that is imposed upon her. Spoilers ahead. 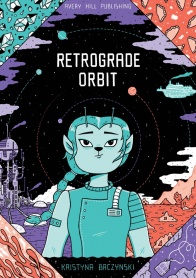 At the outer edge of the solar system, on the mining planet Tisa, Flint and her mother live in the colony of Swift Springs. Displaced by a nuclear event, Flint’s family settled there two generations ago to become miners. Soon Flint will be old enough to begin her apprenticeship at the refinery.

But is the home that her family has built for her enough, or will a mysterious, irradiated planet pull her away from them? By following in their footsteps and leaving to forge a new path, is she betraying her family, or honouring their legacy?

Exploring notions of home and the desire to leave it, Kristyna Baczynski’s first graphic novel is a story of relationships, of time and of the motion of the universe.

Science fiction is oftentimes pigeonholed into telling high-concept stories about wars, adventures or extrapolations on the dangers of modern society. Rarer are those titles that take a step back, slow down, and focus on less grand but perhaps more important, universal themes. It is there that Baczynski’s “Retrograde Orbit” sits, drawing us into the world through its characters’ messy, all-too real lives.

When we first meet Flint, she’s a wide-eyed child who’s home planet, we learn, is inhospitable to them. She never lived there, only her grandmother, but the stories she hears are enough to get her to fall in love with the idea of the land. Her family has just gotten divorced, the cause of which we never learn. She is also a third generation immigrant and bits of that are woven into the narrative, from the abuse she receives at the hands of classmates to the othering caused by her best friend’s family. Baczynski’s deft storytelling weaves these elements together to craft a narrative that is equal parts melancholic and joyful, all in around 100 pages.

This economy of storytelling is one of the strongest parts of this comic. No page is wasted and because of this, the focus is kept tight on Flint and her progression through the various stages of her life. The only drawback to this is that, despite the measured pace of the comic, there is still not enough time and space allotted to moments that required it. Moments such as the aftereffects of her conversation with her father or her fights with her mother over work would have benefited from decompression, to silently show the emotions at play and to further develop the internal worlds of these characters.

That’s not to say that these characters are underdeveloped or that the story is lacking. It’s quite apparent through the care with which she Baczynski has a firm grasp of who these characters are and her art portrays their lives in raw, personal ways. Flint in particular, as she is where the narrative perspective lies, is rendered for us at her most vulnerable and at her most open. The rest of the characters are less developed but intentionally so; we are only privy to the externalities made apparent to Flint, whose narrative position we are following, save for the few moments we slip into her mother’s.

Early on, we know of the divorce between Flint’s parents through the conversation her mom has with her grandmother. They’re fighting over Flint’s mom’s choice of home & how much help she is accepting from her mom, in an argument that will be mirrored and reflected later on in the fights between Flint and her mom. The frame places Flint in the foreground, chowing down on some dumplings, unaware, or at least uninterested, in the fighting going on behind her. She is exposed to it, but it is distant and she is unconcerned. This is echoed later when she learns that her mother had been trading her communication credits for food, clothes and books — necessities when money is short and a reality for many a single parent.

Through the morphing character design and fantastic figure work, Baczynski carves the weariness of Flint’s mother into her face, into her posture, and into her resignation at her daughter’s rejection of all the things she’s worked hard to build for her. It’s a sad realization that could make for an interesting companion book. To see the story from her mother’s eyes.

Thematically, Baczynski does some fantastic work with her coloring. While it’s kept simple, each monochrome “chapter” being a different shade of blue or red, the shifting colors use the Doppler effect to convey Flint’s personal journey. It begins with a cool sea-blue and, as she retreats inwards, so too do the colors, becoming a darker, harsher blue and violet. Once she learns that she might be able to contact her ancestral world, her vision turns outwards, back towards the stars, and with that shift away from the planet, so too do the colors change, reddening as each new stage is achieved.

The tone and story are reminiscent of Hisae Iwaoka’s “Saturn Apartments.” Both feature a young child, yearning to go “home” to a planet that they have been told for their entire lives is an irradiated wasteland and a foolish dream. Both are a coming-of-age story, told against the backdrop of working class life. And both take a measured tone to science fiction, showing the peace that finding the place you belong brings.

“Retrograde Orbit” is a wonderful debut, with hiccups that come from being so new and so short for an OGN. It is a meditative comic that offers more the longer you think about it, filled with creativity and a tight focus. To read it is to be transported elsewhere and to appreciate where you call home.