Krombopulous Michael sure loves killing, and this Rick and Morty-branded one-shot makes that point abundantly clear. 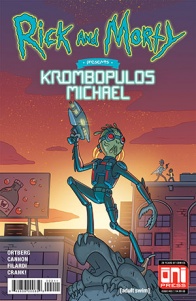 Learn the secret stories and hidden pasts of your favorite Rick and Morty characters in Oni Press’s new quarterly series of one-shots: RICK AND MORTY PRESENTS! In this issue, writer Mallory Ortberg (co-founder of THE TOAST) joins series artists CJ Cannon and Nick Filardi to tell the tale of KROMBOPULOS MICHAEL, the professional assassin who just loves killin’. Discover the roots of Rick’s relationship with the galaxy-trotting killer with no code of ethics: children, animals, old people… it doesn’t matter!

Confession: I am a big fan of Cartoon Network’s Rick and Morty, but this is only the second time I have experienced their adventures in comic book form. The other was the premiere issue of the “Rick and Morty: Pocket Like You Stole It” miniseries. While enjoyable, that comic seemed to be missing something, particularly the full-throttle pacing, blink-and-you-miss-it sight gags, and the rat-tat-tat dialogue that makes the show so fun. “Rick and Morty Presents Krombopulous Michael” suffers a bit from the same shortcomings, but objectively packs the same dark emotional wallop that some of the more memorable episodes of the show contain.

“Krombopulous Michael” is a one-joke comic strung out over 30 pages, but the joke is twisted, knotted like a pretzel, undone, and then twisted again. The book careens from vignette to vignette without narration, capturing different periods in Michael’s life. Daniel Mallory Ortberg’s script is more of a character study than a story, but it’s more effective and nuanced than the simplistic premise has a right to be. It stands on its own as an interesting curiosity focused on a supporting character, but when compared to the propulsive narrative of the show, it does fall a little short.

C.J. Cannon and Nick Filardi do a nice job giving Michael’s insectoid features some expressive detail as he battles his desire to kill and then serenely embraces his homicidal nature. Art for licensed properties is rarely going to be revelatory, but Cannon and Filardi’s seasoned work together on this property captures the look and feel of the show perfectly even if the action is somewhat disjointed by design.

The principal action revolves around Michael’s interactions with Rick Sanchez. The artists also do a good job conveying Rick’s attitude toward Michael. Rick’s textbook nonchalance sometimes melts away quickly when Michael is around, even giving way to fear. There are few things in the universe that frighten Rick Sanchez, so his unease around Michael signals just how little Michael is to be trifled with. But Michael is not some vendetta-driven killer, and it’s the truly motiveless killing that makes him a character so frightening that he becomes comedic, almost in the same vein as Patrick Bateman from American Psycho. Frankly, I think that’s the only reason this character works in a comedy setting. If he was avenging something or acting as an instrument of justice, the character would fall flat or feel like a retread of other angel of death characters. His motivation to kill for money so he can buy more guns and ammo to kill even more people is an economic principal in microcosm, and echoes the similar, albeit less lethal, hamster wheel where many find themselves — buy this car to drive to work, drive to work to pay for this car. Whereas this realization about the futility of their lives might lead to ennui or even despondence in others, it’s Michael’s embracing of this reality that makes his character oddly endearing and unsettling at the same time. He owns it.

It’s a testament to Ortberg’s script that he gets so much mileage out of a simple and oft-repeated conceit in the book. Michael loves killing people, and after he crosses paths with the dimension-hopping Rick Sanchez, a special bond is formed. Notice I didn’t say friendship. In the television series, Rick’s selfishness is often a primary cog in the machinations of plot. Here Rick is able to show that he truly fears for his loved ones when Michael is around, and yet he still enables Michael’s bloodlust by providing the finest instruments of death along with some nice opportunities to kill en masse. Ironically it is the only thing that keeps Rick and those he loves alive. Even as the book develops the simple relationship between Rick and Michael it underscores how tenuous the relationship is. Michael projects real menace, but he’s like a vicious dog that doesn’t bite the hand that feeds it.

Ortberg’s script doesn’t overstep in trying to infuse the proceedings with pathos, but it is a thread that runs through the Rick and Morty television series and it’s certainly a thread here. Filardi’s palette throughout the story doesn’t force the issue either. Apart from the blood and viscera, Filardi doesn’t manipulate the tone with menacingly hot colors. It simply reinforces the notion that Michael is like a force of nature. Like a destructive hurricane, he simply is. He’s as much an instrument of death as a speeding automobile, and his destructive actions are portrayed as just as commonplace as a traffic fatality.

I hesitate to say that “Rick and Morty Presents Krombopulous Michael” is a funny book, but it does share one of the defining characteristics of a show that doesn’t shy away from wallowing in human frailty. In fact, the show tends to mock people’s sense of self-importance and the failure to recognize the sheer cosmic futility of life, which is why Rick Sanchez stands at the center. Even for all his intellect he knows that life is meaningless and it’s emotion that causes weakness. In that sense, this installment in the Rick and Morty Presents series perfectly distills one of the primary pillars of the show. At the end of the day, don’t pretend we’re not all just worm food.

Final verdict: 7.0 – “Rick and Morty Presents Krombopulous Michael” is a nicely-executed book, but reader’s enjoyment will likely depend on their appreciation of the darker thematic aspects of the Rick and Morty television series.