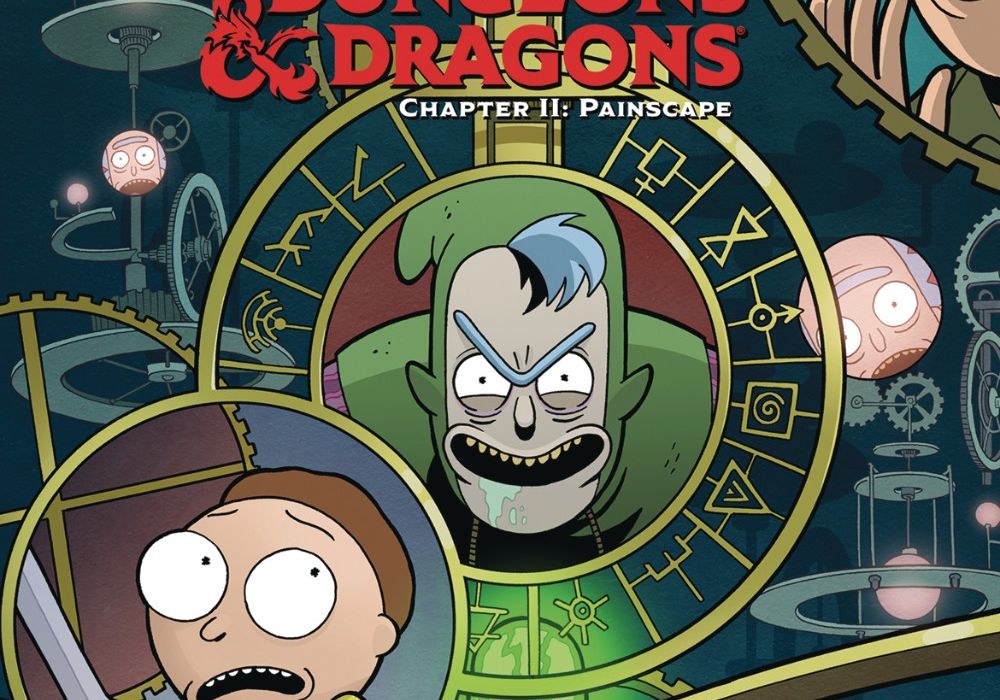 The first “Rick and Morty vs Dungeons & Dragons” was a Rick and Morty style tribute to the history of D&D, walking Morty through the various editions like only Rick could. The sequel, “Painscape” (a play on the “Planescape” campaign setting’s name) is more of a classic Rick and Morty adventure, with wacky hijinks that involve the entire family. Does it work as well as the first series? Read on and find out. 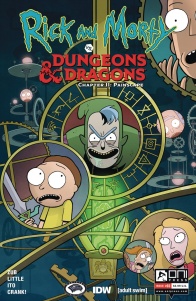 Back on Earth, the Smith family are the only thing standing between their fragile world and D&D-fueled demonic destruction. Can they find the hero within their hearts, or is that more of a final issue kind of question?

“Ricky and Morty vs Dungeons & Dragons” is an idea that sounds amazing in theory but difficulty in concept. Fortunately, Jim Zub and Troy Little have landed the execution perfectly, bringing their passion for both game and series together in a way that feels natural.

The issue is split between two stories: Rick’s misadventures in his half-written homebrew setting and struggles against his older characters, and the Smith family’s flee from and stand against the demonic legions the aforementioned older characters summoned.

So let’s take a look at each part. On Rick’s end, we start with a trip through a woefully (and humorously) under-designed town and into a particularly deadly beginner dungeon. It’s hilarious in a way that is so very Rick and Morty, complete with Rick’s penchant for particularly murderous traps and disdain for other Ricks. The fact that all his old characters are also Ricks (Ricks of his own creation at that) makes it all the more humorous.

The variety of characters is also very entertaining. Rick’s old characters may not have the most optimized stats, so they’re just hilarious bumps in the road for our Rick. The characters include a low-strength paladin who’s overly-reliant on his armor, a cleric who doesn’t believe in the gods, and an elf fighter Rick (just in case you ever wondered what Rick would look like as an elf). Since each of these are characters Rick abandoned, their uselessness makes sense story-wise and is entertaining to read.

Basically, Rick’s side of the story is a hilarious Rick-filled dungeon crawl. Artist Troy Little’s illustrations for the Ricks are all good blends of the Rick and Morty style and classic D&D designs, bringing a nice energy to every page. The dungeon itself also gets illustrated in loving detail, especially when we get a full-page look at the madness waiting within the higher-level dungeon.

The other half of the story is also pretty straightforward, but gives Morty and his family plenty to do. Like how the first “Rick and Morty vs Dungeons & Dragons” brought the characters into a D&D world, this one brings monsters from the game into their world. It gives us a car chase, gratuitous violence, and plenty of shout-outs to D&D terminology. Morty and Summer both get chances to shine with their respective character skills, although it helps that the entire world has been afflicted with D&D-madness. We even get to see Summer’s archery instructor who was alluded to in the first issue, providing good continuity and callbacks.

The transitions between the stories are also done nicely. Sometimes we get moments of simultaneous fights interspersed in the same page to help the transition, other times we have visual and thematic parallels. Even a scene with Rick running from dungeon traps and cursing gets a nice parallel transition to Beth driving away from an approaching Vrock and cursing.

I get the feeling that writer Jim Zub likes Jerry as a character, given how competent Jerry becomes when and only when D&D is involved. In the last series, he got a chance to boost is intelligence and provide insight into what makes Rick tick when he became his character. Now, he draws upon encyclopedic knowledge of “Dungeons & Dragons” to help organize a defense against the demonic hordes. He even includes a rant about how Rick creates so many problems in the middle of a dramatic speech. Of course, it still stays true to the character’s voice, including a note about how Jerry’s estimation of “8d10” rounds is an incredibly wide range.

Jerry’s expertise is backed up by a flashback earlier in the issue, where we see a young Jerry reading up on the lore of the Outer Planes. The cover and content makes it clear that he’s reading the “Monstrous Compendium: Outer Planes Appendix,” which is referenced by name later on, features the monsters the family fights, and was released in 1991 (the flashback takes place in 1993).

All of his shows that Jim Zub did his research. The comic even calls out certain elements of the game’s history, like how demons and devils were replaced with “Baatezu” and “Tanar’ri” to assure parents still caught up in the “Satanic panic” that there are no demons in “Dungeons & Dragons.” Troy Little also brings a lot to the flashback scene, replicating 90’s era fashion and pop culture in everything scattered about the room (although if I can be pedantic for just a moment, Jerry is wearing a “Pokemon” shirt, while “Pokemon” was released in 1996. Okay, I’m done being pedantic now.)

At the same time, it seems hinted that Jerry’s knowledge of “Advanced Dungeons & Dragons” may not be applicable in today’s 5th edition world. He’s wrong about a few things, and Rick’s own adventures establish that they’re “playing” by 5th edition rules, so who knows how this will play out?

As mentioned, Troy Little’s artwork captures the look and style of Rick and Morty perfectly. If you’ve ever wondered what a Glabrezu or Vrock demon would look in the show, then look no further. The demonic creatures still look fittingly evil and imposing even when drawn in the cartoonish design.

The backgrounds also get some nice focus and attention, even those that are intentionally scarce. Rick’s unfinished own gets good designs in its lack of completion, like background mountains marked with map notes and a ground that switches from a square grid to hexagonal battle maps. When we do get more “full” scenery, the background details add life and humor as well.

Credit must be given to the covers as well. Each one references a different D&D book – in this case, it’s an homage to “Mordenkainen’s Tome of Foes,” with Rick taking Mordenkainen’s place.

In short, “Rick and Morty vs Dungeons & Dragons II” continues the hilarity of the first series in a new way. The characters are lively, action is packed, humor remains strong, and the love of D&D is clear in every page and detail.