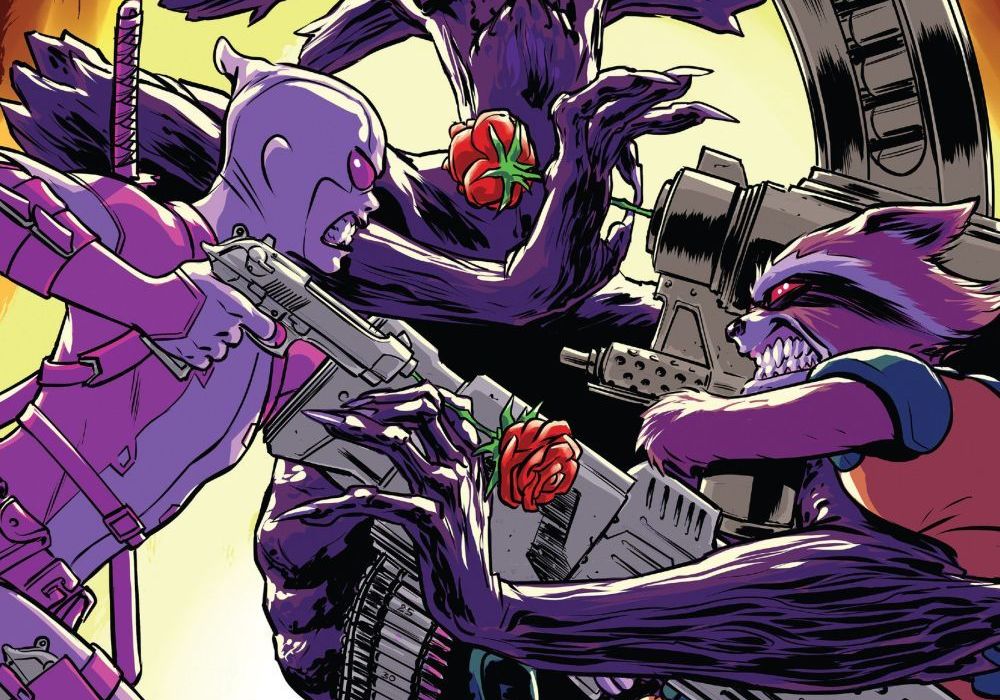 The true battle of “Civil War II,” the one that fans have been clamoring to see, is now underway. No, it’s not Iron Man vs Captain Marvel, it’s a far great clash than that – it’s Rocket Raccoon versus Gwenpool! 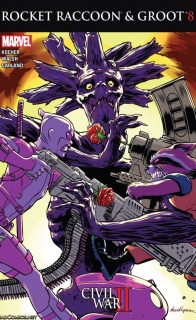 CIVIL WAR II TIE-IN! CAPTAIN MARVEL has called for backup, and ROCKET and GROOT are here to turn the tide! But as CIVIL WAR pits PARTNER against PARTNER, can Rocket and Groot’s friendship survive a TRENCHANT DISCUSSION OF THE ISSUES AT HAND?!?! Probably! But can THEY survive a confrontation with GWENPOOL?!?!

I was not expecting to review another comic with Gwenpool a few short weeks after her latest issue, but here we are, as everyone’s favorite spacefaring rodent and tree cross paths with the latest fourth wall-breaker to grace the pages of Marvel Comics.

Like all comics bearing the “Civil War II” tie-in stamp, it needed to connect to the event in some way, but fortunately for the comic, the Guardians of the Galaxy have agreed to help Captain Marvel, giving Rocket and Groot a reason to be on Earth and a catalyst to start their new quest. Fortunately for the readers, Rocket is about as invested in the new Civil War as he was in the first (that is to say, not at all) so he takes the first chance he gets to undertake his own mission, which the comic affectionately and frequently refers to as his “secret self-serving plan.”

About every other story arc in “Rocket Raccoon and Groot” involves Rocket hunting down some cartoonishly alien bounty, and this plan is no different. A noseless alien with a ship that runs on baby powder? Why not? It’s no less goofy than anything else he’s done, and it matches perfectly with the equally goofy mood that Gwenpool brings.

As befitting of the comic, there are plenty of gags, both in the text and in the visuals. Seeing Rocket and Groot on an airplane (flying coach) with a rabbi stuck between them is an amusing sight, but it’s complimented well with the rabbi’s occasional interjections, such as questioning the need for Rocket’s exhaustive descriptions about his muscles (that becomes a nice little running gag as well).

The artwork can be occasionally light on the details, almost to a minimalistic degree sometimes, but simultaneously makes full use of the spaces the panels provide. There’s no skimping on the backgrounds, and the pacing they provide works nicely. It’s also a comic that doesn’t need extremely detailed shots of the characters or scenery; the story tells itself well enough without it, and the open, cartoon-esque style matches the mood well.

One standout scene, for instance, is just four panels of Rocket and Groot looking at a building and observing the action. The positioning doesn’t change, so every shot is from the same angle, the panels are the same size, but each one shows part of Gwen’s dramatic entrance and exit, with Rocket’s confused reactions adding to the moment.

Of course, Gwenpool’s appearance is when things really kick into action, with chase scenes, big guns, and lots of swordplay. We have a genetically modified rodent with a penchant for big guns up against a girl who knows how to work comic book rules and physics to her advantage, of course there’s going to be plenty of action. And also there’s Groot.

Groot, as we all know, is Marvel’s biggest sweetheart. Sure, he can thrash a couple dozen enemy combatants in a floral frenzy, but complement his leaves and he’ll thank you with a smile and a sweet “I am Groot.” The “Rocket Raccoon and Groot” comics definitely focus more on Groot’s softer side, which works well in contrast to Rocket Raccoon’s angry, frazzled yelling and tendency to shoot first and not bother asking questions later.

Every part of Rocket and Groot’s journey is filled with some amusing scenes, moments, and gags. Often times Captain Marvel serves as the straight man to Rocket’s own ploys and schemes, other times Groot fills the role just by saying “I am Groot.” Given how serious and no-nonsense Captain Marvel is these days (understandable, given the events of “Civil War II”), she’s a major foil to the more humorous characters that fill the rest of the issue.

Really, the issue could have been set up just as well without trying to tie it in to “Civil War II,” but as long as it is, Nick Kosher is making it work. One question remains, though: if Ulysses only predicts major disasters, why would he predict the theft of large amounts of baby powder? Perhaps there’s more disasters to come, as the crossover will continue next month.

Final Verdict: 7.3 – An entertaining crossover with some of the most entertaining characters Marvel has to offer. Some good gags and entertaining moments throughout the entire issue, without getting bogged down by the seriousness of the Civil War.