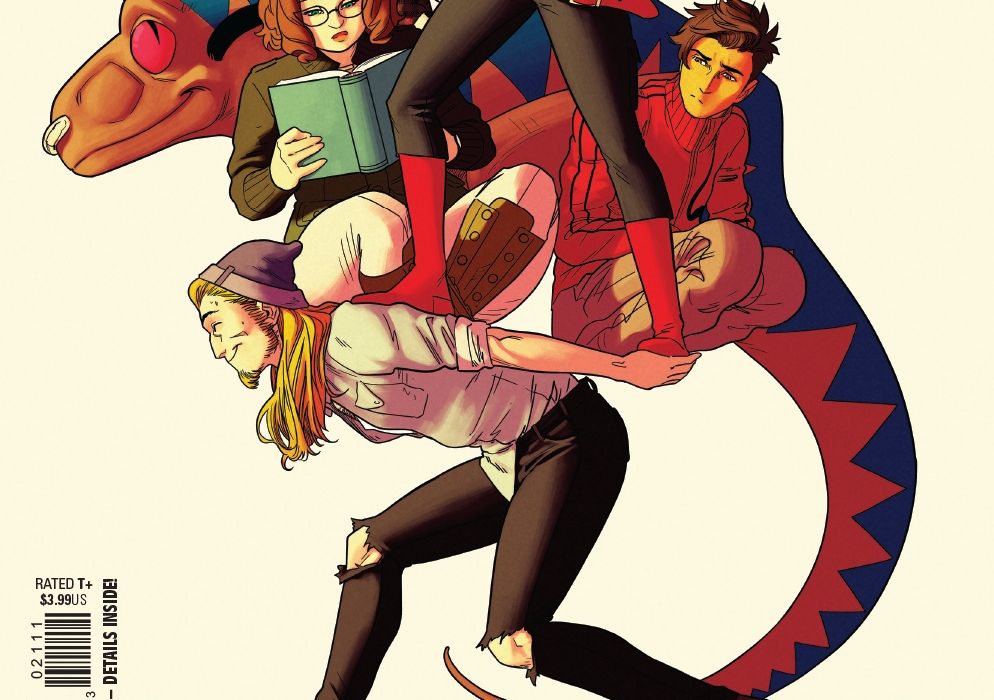 Every hero team needs a day to decompress and handle personal issues, right? Well, when you’re a team of teenage to young adult runaways, there’s bound to be plenty of drama there. The latest issue of Rainbow Rowell’s run on “Runaways” gives us a close and personal look at the characters and their emotional states, to excellent effect. 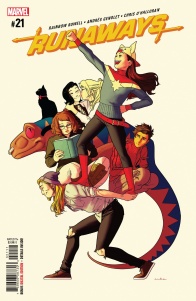 Chase is proud to be the Runaways’ handyman, co-breadwinner, steadfast supporter…well, their dad? But Chase is headed for DISASTER. Hold on to your hearts, Stein-iacs! Plus: Find out what threat has Karolina rainbow-ing out this issue!

The last few issues involved the Runaways struggling with morality, the sins of their parents, and the weight of the world on their shoulders. Choices were made, Doombot was destroyed, and overall it was pretty heavy. So where does the story go after an arc with such high stakes? To very personal stakes.

The majority of this issue involves the characters going about their daily lives and dealing with their issues. Chase is shopping, Karolina is going to therapy, and Molly is trying to handle a lot of emotions after the recent issues. Then there’s Gib, who appears to be the latest member of the team (more by circumstance than by choice) who’s doing a very fine job holding up a wall.

This is not an action-driven chapter, or even a story-driven one. It is completely character-driven, which gives us time to decompress and really feel what the characters are feeling. It’s delivered primarily through dialogue, with only the occasional internal monologue, with good character beats and choices that get us into their heads without needing to spell anything out.

Since the first issue, Rainbow Rowell has proven that she has a solid grasp of the “Runaways” characters, and this chapter exemplifies that. Hearing half of Chase’s phone conversations with his fellow Runaways solidifies his voice and relations with the rest of the team well, even when we can’t hear what the other side is saying. Similarly, his banter with the supermarket employee shows how it looks from the outside and establishes how he truly views them as a family.

Also, Chase’s absolute inability to tell when he’s being flirted with is an amusing and very familiar character trait. Although his statement that his relationship is “not the kind of situation that changes” is significant foreshadowing for the final page’s drama bomb, albeit one that’s been building up for some time.

Similarly, we see Karolina’s therapy appointment, delivered through a two-page spread. Every panel just shows Karolina on the couch, with the dialogue coming from off-panel, and artist Andres Genolet does a fantastic job capturing her body language in every panel. Showing her therapy session does a lot for the character, setting her in an emotionally open place while giving us her direct thoughts without the need for narration or thought bubbles.

As someone who has been to therapy (and I am unashamed to admit it, because there’s nothing wrong with acknowledging when you need help and seeking it), it was a very familiar scene. Not just Karolina’s struggles with anxiety and the advice she’s receiving, but the way she holds herself in every panel and how it connects to what’s being said. The nervous fiddling with her wristband, the way she crosses her legs and holds her arms across her chest, how she slowly slouches down in the couch as she tries to think of the words to say – every moment is familiar and emotionally impactful.

Then we get Chase’s heart-to-heart with Molly, the youngest member of the team and also the one dealing with the biggest emotional arcs. She’s been through a lot in these past 20 issues, and it shows in a powerful and heart-wrenching way. Once again, Rainbow Rowell’s writing and Andres Genolet’s artwork capture the voice, emotion and body language wonderfully.

Even moments between the emotional scenes bring us in to the lives of these characters. Seeing how they bounce off each other or have to deal with multiple people living together gives the characters a real ground to stand on and shows us their everyday world. Not every comic would use the fact that there are fewer bathrooms than people to propel the plot forward, but “Runaways” does, and it just feels natural.

In the end, this is a comic not about superheroes, but about people, a family, brought together by super powers and the sins of their parents. “Runaways” #21 focuses on those people and makes them more relatable by showing them at their most emotionally vulnerable and their most human. It welcomes us into their lives, with all the turmoil, drama, and yes, familiarity that it entails. If you want an issue that truly captures who these characters are, this is the one.

Final Verdict: 8.2 – “Runaways” #21 takes a step away from the super powers and the world-threatening crises to give us a look at the characters in a truly humanizing and emotionally familiar way.