An intriguing game of espionage continues in “Samaritan” #2. 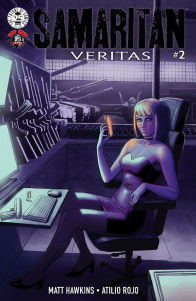 Sam kidnaps the CEO of Northlock Industries, a massive military industrial complex company that’s linked to the president, and begins her plan to take him down. She comes to terms with the fact that it may very well be a suicide mission.

As is common with his work on the adventures of Samantha Copeland, a.k.a. the Samaritan hacker, Matt Hawkins does not flinch from controversy, even to the point of raising some eyebrows. Using a corrupt group of televangelists as the target of the issue, he seems to skewer the most immoral practices of religious scams, such as the sale of “blessed” foods at exorbitant prices to those who do not know any better. This perspective may seem to be anti-religion, but as shown in the “Sunday School” portion in the postscript, it is actually more of a callback to Samaritan’s first appearance in the initial volume of “The Tithe.” Even the possibly political factors of having the protagonist aiming to humiliate, depose, and ultimately assassinate the President of the United States seems to instead be a modernized, more or less realistic take on the “evil overlord being assailed by ragtag heroes” trappings of many a fictional tale.

Hawkins is very good at using existing technologies to tell his revenge story. From his exploration of the illicit side of the Internet known as the “darknet” to quantum biometrics to the speed of a tranquilizer dart and much more, he is very good at examining the way the world currently operates, taking some parts of it that people often do not consider, and putting them into the limelight.

That isn’t to say that the writing is perfect. At times, Hawkins’ writing of Sam seems to skirt the boundaries of realism, such as one of her more miraculous escapes from danger. Furthermore, even though there are a host of negative qualities to every one of her targets, Hawkins doesn’t really give much of a reason why any but the Secret Service would willingly associate with any of them, especially once they start talking openly about their corruption to one another in private. Their blatant immorality would be cartoonish if it were not to dangerous and heinous in the acts themselves, and there does not seem to be a single person who knows them well who is willing to lie for them in public or believe the things that they tell. As such, the fact that they have not been found out before the Samaritan got to them through her black hat connections seems to skirt the bounds of realism.

Atilio Rojo’s artwork, both in his pencils and his colors, are very well done. The use of lighting shows the dark nature of this story, with bright lights primarily used for canned speeches or acts of immorality and/or amorality, and most of the protagonist action going on in the dark. The way in which Rojo puts together such scenes as a piece of camera footage is shockingly realistic, including grainy overlays and shadows hiding eyes from easy view. The ways in which he frames “the Cleaner,” Sam Copeland’s apparent opposite number, paint her as a darker, opposed version of the protagonist herself, with framing coupled with a vaguely similar look making her seem not all that different from her target, in spite of the fact that she tries to murder people personally, rather than attempting to kidnap them non-lethally through hired agents.

Troy Peteri’s lettering helps to distinguish between different forms of communication. The use of both uppercase and lowercase is easily identified as Sam’s internal monologue, and is rougher around the edges than other text in the issue, showcasing her fragility in spite of her expertise. For speaking aloud, Peteri makes use of the classic all-caps of many a comic book, giving readers a sense of security in the idea of the story being one of many, while also making the actual contents of the speech hit home even harder due to how deep into illicit culture it travels. Peteri’s use of a typical text font, seemingly the common Arial, for text communications by digital media helps to both discern the source of the conversation and designate it as removed from direct human experience, filtered through an electronic medium.

Coloration on text boxes also is important and relevant, giving impressions on the story itself, whether the decision of Rojo or Peteri. While Sam’s communications over her team’s feed is black text on white backing, “the Cleaner” takes orders from someone with a similar styles of writing, but with white text on a black background, showcasing the darker nature of the assassin’s handlers.

In all, “Samaritan” #2 is a very interesting story, but not without its flaws. It is not for everyone, with its intrigue possibly hitting too close to home for some, and could use with a bit more in the way of reasons for readers to believe that taking down Sam’s targets would be as difficult as she seems to imply it has been for her.

Final Verdict: 7.75 – A rather controversial, yet interesting look into the developing story of the Samaritan hacker, but could use a bit more nuance on the side of the antagonists.