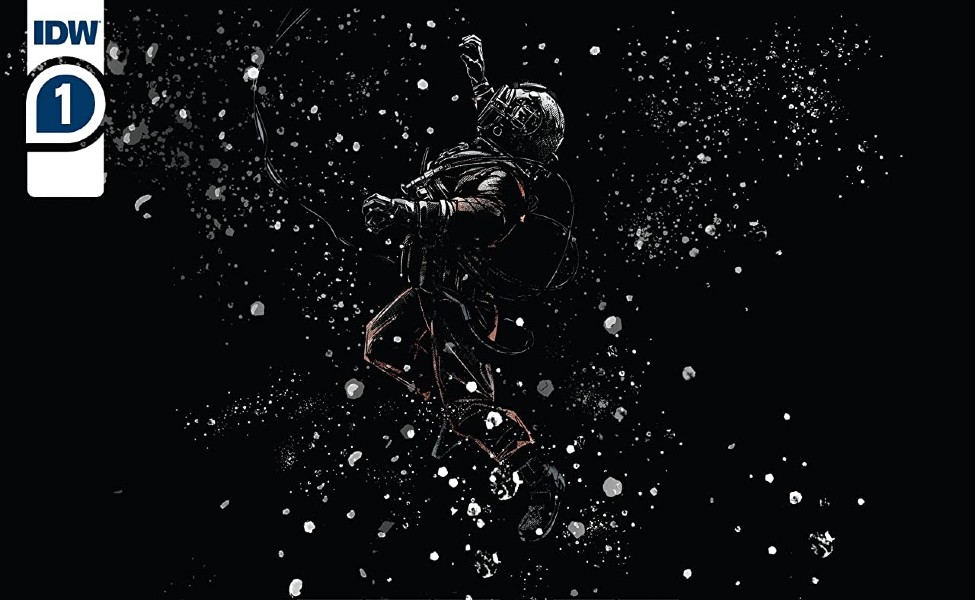 “Sea of Sorrows” #1 paints a sordid world full of ink black seas, mercenary sailors, underwater horrors, and the terrors of a recently fought war. Grim fare indeed, but it makes for solid, gather-round-the-table storytelling. Grab your ale, don your raincoat, head to the port and sing your favorite sea shanty of love lost and fortune faded — that’s the vibe we’re getting from “Sea of Sorrows” #1, and it delivers. Anchored by Douek’s commanding narrative and set afloat by Cormack’s evocative nautical art, “Sea of Sorrows” #1 should be on the reading list of anyone interested in historical fiction and horror fantasy. 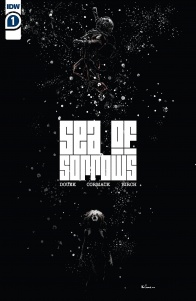 Deep sea adventure with a horrific twist! From the creative team behind last year’s hit horror series, ROAD OF BONES, comes an all-new tale of bone-chilling terror! In the aftermath of the Great War, the North Atlantic is ripe for plunder by independent salvage crews. When a former naval officer hires the SS Vagabond, he leads the ship to a sunken U-boat, and a fortune in gold. Tensions mount as the crew prepares to double cross each other, but the darkness of the ocean floor holds deeper terrors than any of them have bargained for! Plunge headfirst into the icy waters of dread with another historic tale of terror from writer Rich Douek, and artist Alex Cormack.

At this point, the allure of sunken, (usually German), submarine treasure is its own delicious pop culture niche. These stories sit in the Bermuda’s triangle of historical drama, conspiracy theory, and adventure — meaning it’s ripe territory for storytelling. Douek plays into the elements of what makes stories like this so enticing, namely the moral ambiguity that comes from chasing after ill begotten gains. Specifically, “Sea of Sorrows” #1 introduces us to the dubious cast of characters dredged to the surface for such a risky, quasi-legal task. We have egotistical sea captains, reserved, plotting foremen/forewomen, and the trouble diver who just wants to hang out 700 feet below the surface to drown war traumas. Throw in some ominous drunks telling tales of sirens, and it’s a full party. In other hands, this kind of story would come off as too tropey. In Douek’s grizzled palms, however, “Sea of Sorrows” #1 is a perfect mix of The Underwater Welder, Indiana Jones, and a dash of The Shape of Water.

If Douek’s narrative is the beating heart of the story, then Cormack’s art and colors are, well, everything else and then some. It’s hard to overstate just how on point the illustration and overall style is in “Sea of Sorrows” #1. To start, Cormack’s color palette is so precise for this kind of story. He serves us not just pitch black seas, but blood in the water reds, sea glass greens, slate greys that are absolutely frigid. Cormack’s color blocking looks expert and is always intentional. He frequently uses heavy chunks of black to obscure detail, facial features, or evoke a claustrophobic mood when necessary. Because of this, each page of “Sea of Sorrows” #1, even the more expository ones, add to the horror genre feeling of the story. On a more subtle note, Cormack’s panel texture itself makes the story feel of its time. There’s frequent crosshatching to delineate light and shadow, which gives the whole thing a mild but noticeable Rockwell Kent, Moby Dick woodcut feel. Every visual element in “Sea of Sorrows” #1 is tempered to the open sea, and the final product is a comic that defines the term gestalt: each piece in “Sea of Sorrows” #1 comes together to form a realized artistic vision. This is a drizzly November of the soul if there ever was one.

It’s high praise, but for “Sea of Sorrows” #1 it feels deserved. If you’re into moody treasure hunting and underwater adventure, I can’t think of a better comic to add to your pull list. If we had to summarize “Sea of Sorrows” #1 in terms of how it’s constructed, we’d go with “attention to detail.” Truly, every piece of this story feels painstakingly constructed. From the period character costumes, language, boat design — all of it has a sort of historical and genre veracity that shows to us that the creators really care about this project. Not only is “Sea of Sorrows” #1 beautiful to look at and a creepy delight to read, but it feels altogether airtight. We can’t wait to see what deep sea beasts are unleashed in the upcoming editions. See y’all on the seas.

Final Verdict: 9.5. Propelled by the force of masterclass writing and transcendent, genre defining art, “Sea of Sorrows” absolutely sails — this ship is a thing of beauty.