The dramatic action of “Self/Made” #3 positions the series well for the final books of the first arc, but a key question still looms: whose story is it? (Warning: contains minor spoilers.) 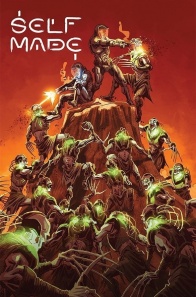 With the walls closing in on them, Amala and her creator must set aside their differences—because a vengeful Brycemere is coming for them, with a horde of cybernetic zombies at his back.

In “Self/Made” #2 the book’s protagonist Rebecca, a moody and cerebral game designer on a not-so-secret quest to create sentient artificial intelligence, tells her corporate nemesis Bryce, “Tearing down what you do not yet understand . . . that is the response of a Neanderthal. We should seek to understand the unknown. And to understand, we must experiment.”

Bryce has no time for such nonsense. Important deadlines loom and anything that stands in the way must either be fixed or simply eliminated. Therein lies the central conflict. Bryce wants to destroy Rebecca’s prized creation Amala, a non-player character (NPC) who doesn’t play by the rules, whereas Rebecca sees Amala as a huge potential breakthrough and the culmination of her life’s work.

To Bryce, Amala is a mere glitch. For Rebecca, she is the future, a huge evolutionary leap in game design and a massive market opportunity. Much to Bryce’s chagrin – and Rebecca’s delight – their boss Stuart Busuttil is intrigued enough to agree to a major experiment. Amala will be placed in a game for which she wasn’t designed to see how she behaves.

That’s a lot of context, for sure, but almost the entirety of “Self/Made” #3 takes place in this alternate world, a cooperative Sci-Fi game called “Plaga,” in which players work together to kill a quintessential ghost king. Importantly, none of this is spelled out in “Self/Made” #3. You only know all of this if you’ve read the preceding issues, which is by far is the book’s drawback. In the perpetual debate between buying monthly floppies or waiting for collected editions, the creators nudge you pretty hard toward waiting for the trade. If you missed either one of the first two issues, I imagine you’re pretty much screwed, struggling to understand what the story is really about.

Visually, in contrast to the debut issue which featured a pretty unique and highly detailed fantasy world, this book’s boilerplate Sci-Fi look comes across pretty tepid. The setting is a generic, hazy red-orange desert planet framed by a nondescript, presumably futuristic skyline. Similarly, Amala and Rebecca wear standard issue, off-the-rack Sci-Fi spacesuits and carry clunky, short barreled rifles that shoot bursts of energy, maybe, or some other nonspecific mystery projectile. Capping it all off, Bryce, in the guise of the neon green Ghost King, sports a long flowing mane of luxurious hair, despite his skeletal features, and wields a pair of curved glowing swords. His numerous henchmen, of course, are the very definition of NPCs, a mindless, shambling horde of cybernetic skeletons whose only job, it seems, is to slowly press forward into the line of fire.

Honestly, I don’t really blame illustrator Eduardo Ferigato. His inks are certainly more than competent and his paneling is on point. Marcelo Costa, too, does a fine job on colors, mixing unobtrusive warm and cool tones with high tech neon greens and electric blues in just the right amount. Characters are easy to track and the settings are immediately identifiable. Visually, the book is a breeze, but still a bit of a letdown after the series high-water mark of the first issue’s opening pages. Clearly, the artists fully committed to the look of that fantasy world, but a similar artistic commitment seems to be absent since.

Ironically, in some ways, this general lack of a distinct visual identity allows the reader to really hone in on the text and fully engage with the book’s philosophical questions. What is real? What does it mean to be alive? Who is sentient? Who matters? Who actually has free will?

These are great points to ponder and ideas to debate and for the most part they’re kept front and center. Obviously, the biggest challenge is to move the conversation forward in a meaningful way and not resort to clichés or merely rehash the tired tropes that we’ve all seen a thousand times. The question that looms, I believe, as we move from the third issue into the final books of the first arc, whose story is it? Is it Rebecca’s story, the one who created “life” and consciousness from mere computer code? Or is it Amala’s story, the one who doesn’t really exist in any conventional sense, but within a set of data created by someone else?

The creators are well positioned to wrestle with these questions, but in a post “Matrix,” post “Bladerunner” world – as we’ve been now for nearly two decades – if those insights aren’t fresh and the characters aren’t compelling, things will deteriorate fast and feel derivative pretty quickly.

Final Verdict: 7.5 In the end, “Self/Made” #3 is a solid issue, but only as a bridge between the first two installments and the books that are yet to come. If you’re not yet into the series, this is a tough place to start.