Take a well-written, interestingly illustrated, and beautifully colored look into the mind and world of Shatterstar, Mojoworld refugee and Queens landlord. 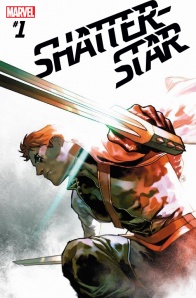 A gladiator, a warrior, a hero…the man called Shatterstar has been many things, but one thing he’s always been is deadly. He’s not a man you want to cross or you’ll learn that fact all too well. Walk back into the darkness with Shatterstar.

For many readers, Shatterstar the character is best known for his most recent appearance in film as a member of Deadpool 2‘s X-Force. As such, it would be easy for people to disregard him as a blowhard, as someone who talks big but can’t possibly back it up, and who is focused on himself first and foremost. Forget all of that, because Tim Seeley demonstrates just how to introduce his take on the ex-gladiator originally known as Gaveedra-Seven (and now as Ben Gaveedra) over the course of this first issue to the “Shatterstar” miniseries.

Under Seeley, our Mojoworld refugee protagonist has taken up the role of landlord (one in which he takes a comedic amount of pride), and there is an extensive concentration on his interactions with his tenants, ranging from the utterly bizarre (a supervillain pug) to the silly (two former rajas who have become roommates talking about who would do a good job in a fantasy television series they want to produce), to the mundanely sad (an old man with Parkinson’s disease), to the mundanely kind (a young woman who decided to help raise a potential threat to the future instead of kill her), to the just flat out mundane (a fan of superheroes who comes from Earth-1218, a.k.a. the real world like we readers). The brief look at each of the tenants through Shatterstar’s eyes gives insight into what makes each of them tick, providing just enough sympathy for each of them to make anything bad that happens to them hurt all the more, despite only seeing each of them for a very brief period.

The use of such a normal job as a landlord helps to showcase a key dichotomy that seems to be essential to “Shatterstar”: the cross between the mundane and the fantastic. By placing such bizarre beings in such a normal place as a tenant building, Seeley shows a key part of how the Marvel Universe operates, merging such ridiculous things as inter-universal time traveling heroes aiming to save their timelines with something as normal as paying rent or signing a lease. The Marvel Universe is full of things like this, most famously the floating super-hero poker game that has been going on since 1979, and Seeley is adept at merging the fantastical with the relatable in yet another humorous way through the use of the Major Crossing building.

Outside of that dichotomy, another essential focus is on Shatterstar as a character, on his internal monologue and how he sees the world. The focus on complexity as being “real” as opposed to the simplicity of a several hour rehearsed production is rather interesting, and goes to show how a native of the ratings-centric Mojoworld would find the complex, difficult-to-understand feelings of people from the normal Earth-616 and other places in the multiverse more interesting than their own more flighty emotions. Even Shatterstar is not immune to the pull of “interesting” things, as Seeley’s explanation about why he broke away from Rictor shows that he focused on conflict as a means to keep himself intrigued, rather than on avoiding conflict. That kind of emotional reaction is directly contrasted against the more “for-the-audience” relationship Shatterstar apparently had with an apparent major villain of this miniseries, and gives way to an idea that these characters are, in a sense, real people.

“Shatterstar” #1 has two different artists, with Carlos Villa on the main plot, and Gerardo Sandoval on the flashbacks to the eponymous character’s life on Mojoworld. It is best to focus on each of these styles in turn, given they have distinct differences.

Carlos Villa’s artwork is relatively realistic, with a focus on the variety of different faces (especially with the oddities in markings from Mojoworld). The action is relatively slow, calm, and doesn’t focus too much on doing things for the sake of doing them, with each and every action having an actual, distinct purpose that is intrinsic to the person performing it, be it calmly and nicely walking down a set of stairs to hand over a lease agreement, making a face in irritation at being talked down toward, or slamming a door in Shatterstar’s face. Where there is violence, it is off-panel for the most part, with the focus primarily being on the aftermath and beginning, and even then mostly on the way the combatants or victims react to the situation at hand instead of how they progress through such a hostile situation. Furthermore, there is focus on the light and the shadow of the different areas in Shatterstar’s life, but not for reason of giving a theme. Instead, the duality of light and dark adds a bit of cartoonishness to the style, while also paradoxically providing additional realism in how the light and shadow play off against one another to create a three-dimensional whole.

Gerardo Sandoval’s artwork on the flashbacks to Shatterstar’s time in the gladiatorial arena is far more dynamic, theatrical, and gruesomely violent, with a focus on heroic poses and bloody impacts as much as on long kisses and more. In concentrating on the theatricality and a creative use of camera angles to enhance the position of a combatant to seem more threatening, Sandoval creates a definite “television show” style for Mojoworld itself.

Carlos Lopez provides a detailed color palette to “Shatterstar,” with differences across the flashbacks and the modern day. Colors differ significantly between different tenants and normal people both, with colors ranging from a mundane forest green jacket and aqua pants to a dazzling gold or bloody red depending on the way in which tenants live their lives across a “assimilation to isolation” spectrum. Most notable is the use of an orange wash across “theatrical” scenes, including Shatterstar’s flashback to his fight with Gringrave and his experience watching a high school theater showing of Titus Andronicus, demonstrating a similarity between the two experiences on a level that, to Shatterstar himself, would be almost visceral.

In all, “Shatterstar” #1 is definitely showing that this minieries is one to look out for, with just enough to interest readers in this character even if they barely knew anything about him before.

Final Verdict: 8.5– Tim Seeley joins forces with two illustrators and a colorist to create a fascinating look in on the mind of a Mojoworld refugee’s experience with relative normalcy.