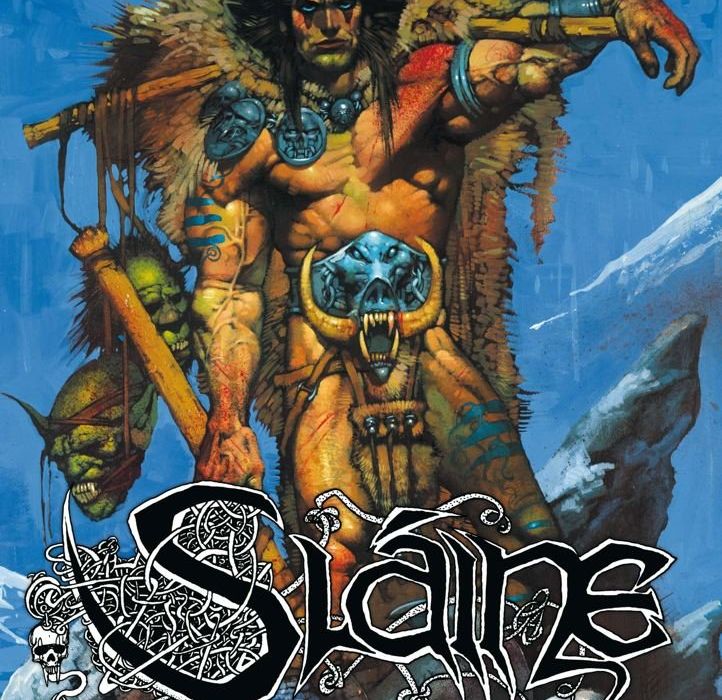 Here is a true classic. Rare are the comics that are untouched by the hands of time, but this is one of them, a work that feels today, over 20 years later, as real and as immediate as it must have felt for the first time. “The Horned God” works both as a rousing adventure story and as an examination of manhood that yields surprising results. 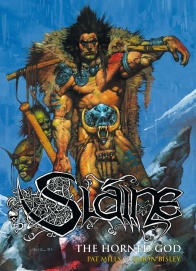 Celtic warrior Slaine faces his greatest adventure. He must overcome the Formian Sea-Demons that threaten the Earth goddess and the very existence of the land of Tir Nan Og. Fully-painted color art from Judgement on Gotham/Teenage Mutant Ninja Turtles artist Simon Bisley.

The warrior barbarian Slaine, master of the warp spasm, wielder of the mighty axe Brainbiter, Celtic warrior king – faces his greatest challenge: the existence of his world is at stake as he prepares to follow the ways of the Horned God. It is a path that can give him control over nature itself or unleash a new age of witchcraft and dark forces.

It is rather fascinating experience to read “Slaine: The Horned God.” The comics is written in a very macho style, full of declarations of power and control with many scenes of battles where manly man show of their prowess. The art by Simon Bisley seems to be taken directly from the dreams of thousand metalheads: massive and contorted bodies, shirtless to show off gleaming muscles, skeletons and dragons and beautiful woman in a full on “come hither” poses. if someone was to translate the entire discography of Manowar into comics it would appear to be “The Horned God.”

Yet for all of these qualities “The Horned God” is, surprisingly, a story about men learning to let go of control. Slaine, who was crowned earlier as a “sun hero,” learns throughout his heroic legacy is actually that of destruction, that he must reject it. It is no coincidence that the villain piece, the wonderfully named Lord Weird Slough Feg,jj is an old man whose time has long passed and yet refuses to vacate his throne. It would have been an easy choice to put Slough Feg as a sole villain, a cardboard cutout of misogyny, but Pat Mills’s writing is cannier than it appears: in the form of Slaine’s druid adviser, who gives lips service to idea of goddess while espousing male dominance, or in the form of lady Medb who is so under the influence of Slough Feg that she cannot see her own enslavement. That are many ways to serve a corrupt status quo.

In many ways “The Horned God” is a comics ahead of its time, maybe even ahead of this time, one that recognizing the toxic nature of present male representation and offers an alternative. It’s not that Slaine lacks the attributes of a ‘classic’ male heroes, he is strong and capable, brave in combat and built like brick wall, but his self confidence in his abilities leads not to Beowulf-esq self-glorifying. Rather, his most important value is knowing his own self-worth, which allows him to submit to others with no shame.

Still, one wouldn’t want to give the impression that this comics is either long-form diatribe or some canonical feminist text. Nobody will mistake Slaine, who solves most his problems by beating them to death, for Simone de Beauvoir. This is a story first, full of all the expected thrills that a 2000AD tale promises; but, like other 2000AD greats, it is a story that does not shy away from socio-political massaging. Like many works by Pat Mills, it blends the two without much subtlety but with a lot of zest.

Mills is a writer of long standing whose most recognizable quality is the relentless nature of his scripting. There are more ideas in any single Pat Mills short than there are in full ongoing series by other writers. While this keeps the stories energetic it can often make them too hectic, they become a matter of moving characters from A to B to C. “The Horned God” feels like his most focused work, whether it was planned out in advance or not it gives the feeling that there is a guiding hand throughout it all, and the epic ending he’s aiming to feels earned.

Simon Bisley’s art is really the standout element here. It is easy to forget, years after his style has been co-opted by dozens of lesser imitators who ruled over “2000AD” for a while, just how vital a Bisley page can feel. His work simply phenomenal here: in terms of design, movement, and mood. A lot of focus is often given to the more extreme elements, the brutality of the action, or his over-the-top-designs sense; but his greatness revelers itself here in smaller moments. There’s a full page of the Lord Weird Slough Feg dancing in a ritualistic manner, moving his body in hypnotic manner, his limbs as if controlled by invisible strings. It’s hard to make dancing work in comics, not just to show the proper sense of movement but also to imply the rhythm that pushes the movement forward. It’s such a beautiful scene, almost heartbreaking in its depiction of an old man who became a prisoner of his own past greatness, yet also preserving comical elements (a pratfall towards the end) and a feeling of creeping horror. 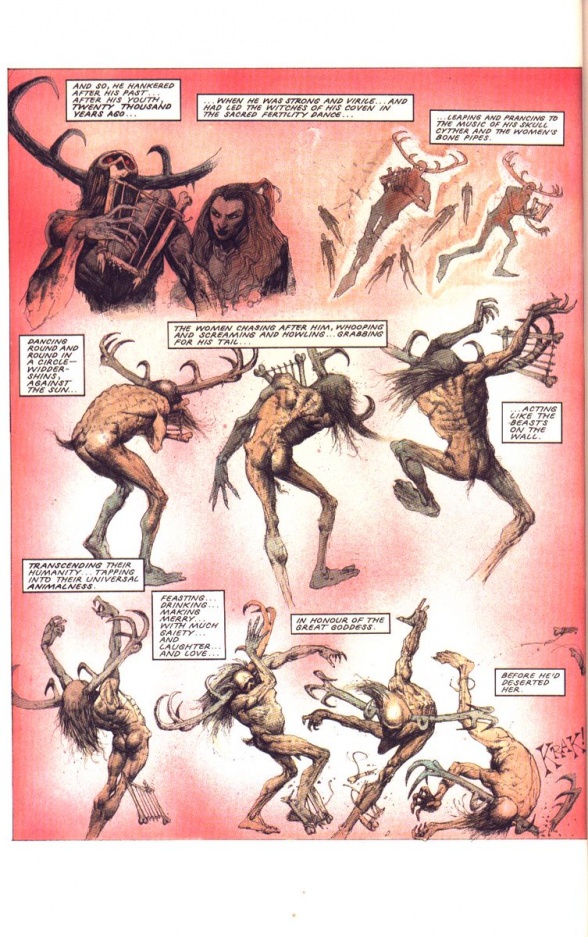 Likewise, the chapter in which Saline dives into the cauldron to meet the goddess is a strong showcase for Bisely’s range of talent: shifting the colors and even the styles of drawing to represent a journey that is both spiritual and physical. Like Slaine himself this a comics that refuses to be rigid, to adhere to how things used be done. Instead Bisley and Mills are all about the new; reinventing themselves seemingly with every page. Slaine’ task in the story is to learn and grow and so it is fitting that artistically the comics shifts and moves. In many ways the work Bisley does here brings to mind Bill Sienkiewciz, he can experiment numerous time within a book, or even within a page, and never lose his recognizable voice.

There are faults in the story: Ukko, Slaine’s dawrven companion, is used overmuch as a comic relief, the joke wears thin quickly and instead of lightning the grimmer moments it just feels out of place; the climax of the story also drags a bit towards the end — another fight, another speech, another cataclysmic event — as if the creators enjoyed themselves too much to stop.

Still, I’d rather have too much of a good thing than too little. And “Slaine: The Horned God” falls definitely under the category of a “good thing.”