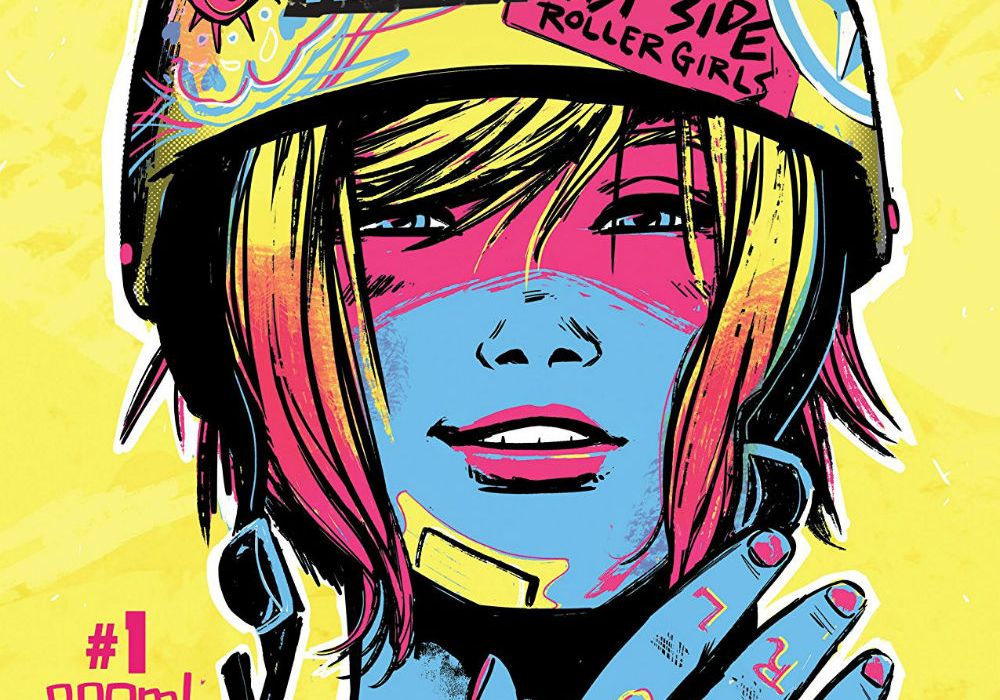 Returning from the depths of cancellation, “SLAM!” graces us with another bout, another race, another shot at redemption. The roller girls are back but can they retake the lead? 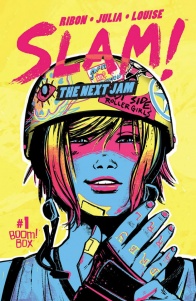 Get ready for another lap around the track in this follow-up series to Pamela Ribon’s critically acclaimed SLAM!

After breaking one of the biggest rules in derby (not to mention an actual collarbone), Knockout and CanCan have a lot of work to do to rehabilitate their bodies and improve their standings in the league.

Having not read the original (mini)series as it came out, I was of two minds about this issue. Do I track down Vol. 1 and familiarize myself with the characters or do I just jump right in? I ended up choosing the former, for better or for worse (I’ll get to that in a minute). I think the decision I made opens up an interesting conversation about how we read comics, a medium that for the longest time was highly “episodic” where issue #352 could be read without any knowledge of the previous #351 but now, with the trade market, this has largely dissipated.

To enter cold in the middle of a run is much harder to do, but I think this is a series for which that is an entirely doable option. Let me explain. For one, we have a new artist, Marina Julia as opposed to the original’s Veronica Fish, which as I talked about last week in my “Black Bolt” review, has its pros and cons. The artist is the soul of the comic, the thing which the reader interacts with the most and that which sets the tone of the comic. To change the artist is to change the feel of the story.

That has happened here. Because I went straight from reading “SLAM!” Vol. 1 to issue one of its sequel series, I was thrown for a loop. It took me a good portion of the issue to reacquaint myself with the characters, as many of them looked very different in this issue. Characters, because of the more sketchy nature of the art, also tend to look more similar than they did before. Knockout and Kristen are both examples of this where, save for their hair, they look very similar, especially during the distance night shots, so during the first few pages of the issue, I had to really pay close attention to which character was which.

This issue is also much more somber than the previous series, slowing down to give us more character backstory. If “SLAM!” was all about the rush of the derby and how it completely changes your life, “SLAM! The Next Jam” is all about what happens when that rush is stolen from you, how you cope with the changes once the reason for those changes has been removed.

We feel this most in Knockout’s life. She’s moved back in with her parents and grandmother (who’s presumably living in Knockout’s old room), or at the very least is going home often enough for her grandmother to comment that she is not an app that needs to be fed every little update.

Knockout’s always exercising although she cannot participate in the matches, instead being forced to clean up the extra levels of mess the team creates for her, and in one really great panel, is just sitting alone at the top of the bleachers. It’s a large panel, taking up half the page, that cuts diagonally near the bottom. She is situated in the center and the empty space around her makes her really feel alone and shunned. It’s a palpable feeling that I know I’ve felt before and it’s not fun.

We get hints of something with Kristen through her body language and the tight paneling on her tense hands clasping her bag and keys, as well as the panel showing her nervously looking around before booking it down the road. Julia really sells the uncomfortableness of Kristen in a way that I think would have been very different were Fish to have drawn the scene.

Julia’s artwork also has the scratchiness to it that makes the entire comic feel more, I don’t think serious is the right word, but more grounded. Like we’re in for a less bombastic but more dramatic story than we had before. “SLAM!” contained a lot of big sports tropes (the tough-love teammate, the rivalry between former friends, the big win for the team) but this issue takes all those and throws them away. Knockout is sidelined, Cancan has a busted shoulder, and Velvet Coffin and the rest of the Pushy Riot team is shuffled off to the side. Instead we get a lot of character moments and teases for future developments outside of the track.

Additionally, Julia’s artwork just doesn’t lend itself to the motion and large expressions of the sports part of the derby. It’s readily apparent in this issue as during the derby match scenes, the action doesn’t feel all that kinetic. The faces of the crowd all feel static and, while they don’t feel out of place, they’re just big smiles and green blobs. But there is still a tension in the scene, as we cut between the scoreboard, a new character, Red Kennedy, as well as Cancan and Knockout awkwardly cleaning the bathroom together. The small emotions that are conveyed through Cancan’s somber look and Knockout’s guilty posture are the strengths of Julia’s artwork and as such, they take precedence.

Like I said, the artist sets the tone and it seems as if the time spent between these two mini’s was spent refining that tone. Ribon’s handling of the characters feels much more nuanced here and the dialogue is much more restrained. It still feels natural but it’s less bombastic, less over-the-top bubbly. The characters feel the weight of their situation and so do we.

Final Verdict: 7.4 – Julia may not be Fish but she brings a whole different feel to the world of “SLAM!” The track is set. Let the match begin!