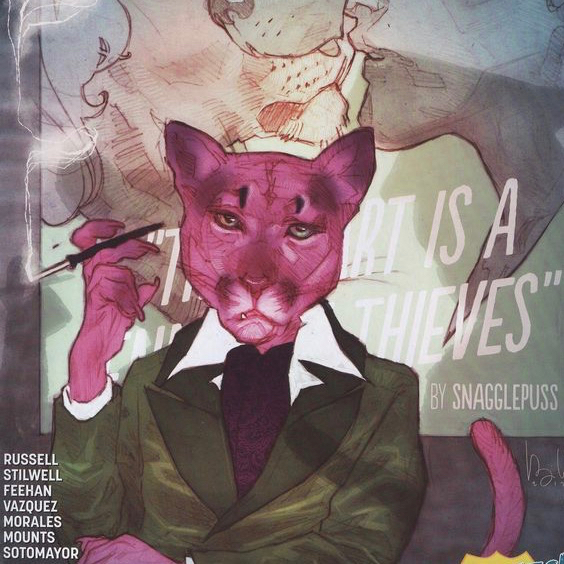 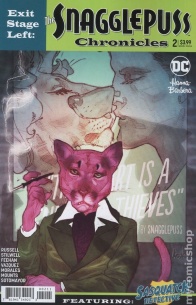 As his friends are blackballed from show business, the government turns up the heat on Snagglepuss, even as his play threatens to implode from within. But no matter how grave the threat, Snagglepuss lives by a single motto: the show must go on!

It seems impossible to write a review of the gaudily entitled “Exit Stage Left: The Snagglepuss Chronicles” without also referencing Mark Russell’s previous groundbreaking work on “The Flintstones.” Rather than simply rework and rehash the basic elements of that classic cartoon series to create yet another glitzy albeit mundane contemporary reboot, Russel mined the source material to deliver a surprisingly acerbic, genuinely witty satire that skewers everything from organized religion to consumerism while also making the case for a more evolved attitude toward same sex marriage and workers’ rights. It’s sprawling. It’s funny. It’s wild. And it’s impossible to ignore while considering “Snagglepuss.”

So: clearly, if you’re at all familiar with Mark Russel’s previous work (and the Hanna-Barbera reboots in general), you already knew that “Snagglepuss” would be anything but a careful, benign reinterpretation of an iconic cartoon property. What you may not have expected, however, is the tenderness and absolute charm that infuse this new series. Whereas “The Flintstones” was broad and expansive with a decidedly outward focus, “Snagglepuss” looks inward to examine the characters’ unexpectedly rich inner lives. It’s also a chilling look at a dark chapter in American history that suddenly feels all too analogous to current events.

In any case, issue #2 begins exactly where the debut issue ended. It’s 1953, the Cold War is in full swing and the U.S. is locked in a military and moral struggle for survival against the ever growing Red Menace. Of course, the Soviets and Chinese simply pose a military threat. The “junkies and perverts” who pollute the American stage and screen with their immoral art actively seek to destroy the heteronormative ideals that make America great!

At least, according to Gigi Allen, the Senator Joe McCarthy stand-in who has it all figured out. Sure, the Soviets may have the bomb, but the real danger to the homeland is degenerate popular culture. That we can do something about! “Like it or not,” she says, “as entertainers, you’re all in politics. And as for your government, we are now in show business!”

Suddenly, it all makes sense. A tall, thin, gentlemanly, closeted pink mountain lion – who also happens to be America’s foremost playwright – is both the perfect target for investigation by the House Committee on Un-American Activities and the perfect protagonist for the series. It’s a rather incredible feat of imagination on the part of the creators that also demonstrates how much of excellent writing has very little to do with the actual words. Set a great concept in motion and the writing takes care of itself. Or, at least it feels that way to the reader. Truly, this is one of the most quotable books I’ve read on a long time. Whether its comedic, thought provoking or touching, the dialogue soars. Equally important, however, is the subtext beneath it all, a dynamic that’s also seen in the book’s incredible illustrations.

Mike Feehan’s pencils, Mark Morales’s inks and Paul Mounts’s colors work beautifully together to create a remarkably coherent, realistic world in which an anthropomorphic animals and humans flawlessly intermix. From cephalopod to hippopotamus and all manner of creature in between, every character is rendered with an expressiveness and personality all its own. These animals aren’t mere side gags or comedic relief, they’re characters we connect with and want to know more about. Far from seeming out of place, they all look and feel utterly natural. Even when human actors don costume noses and ears to portray their anthropomorphic counterparts on stage, somehow it all makes sense. We not only buy it, we love it. It makes the world more richly realized and well suited to the narrative’s complex emotions. I’m not sure I understand how the dynamic actually works, but perhaps the artifice somehow lessens the emotional distance and lets the characters be more “real.”

Either way, there’s something magic about a bipedal pink mountain lion, an anthropomorphic blue dog and a human actor (who happens to play the aforementioned dog in an upcoming stage play) walking down the street together while no one else bats an eye. And make no mistake about it, when one of these characters feels something, we experience that feeling, too. At the end of the day, this is an allegory (or metaphor or whatever your high school English teacher would tell you it is), but at the same time, there’s a disarming immediacy to it. This story’s not told at a distance. You’re right there in the thick of it all.

Final verdict 8.6 – With a strong debut issue “Exit Stage Left: The Snagglepuss Chronicles” got off to an impressive start. Issue number two raises the bar with a more intimate look at the core characters and wonderful art that underscores their humanity, whether they’re actually human or not.