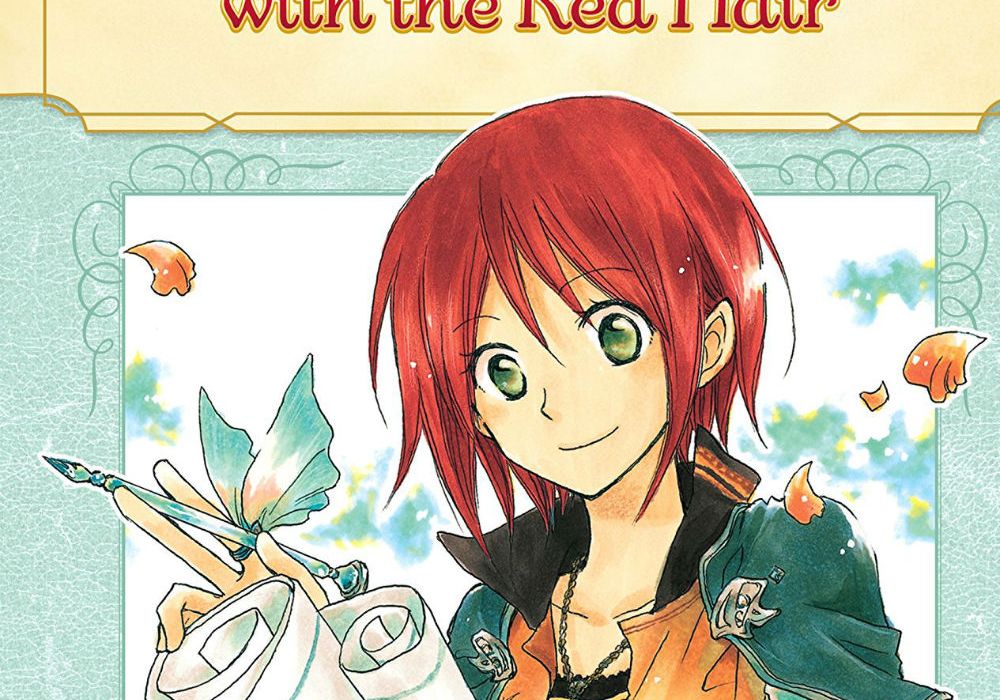 “Snow White,” like most fairy tales, has been told and retold for centuries, morphing and reflecting the cultures and times that tell them. No two renditions are alike, however, certain details stay from telling to telling, becoming touchstones that can be recognized even when the story itself is vastly different. And oh how different, yet familiar, this one is. Some minor spoilers ahead. 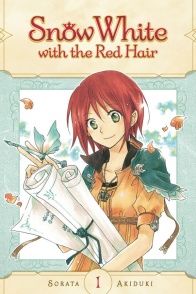 Shirayuki is an herbalist famous for her naturally bright-red hair, and the prince of Tanbarun wants her all to himself! Unwilling to become the prince’s possession, she seeks shelter in the woods of the neighboring kingdom, where she gains an unlikely ally—the prince of that kingdom! He rescues her from her plight, and thus begins the love story between a lovestruck prince and an unusual herbalist.

“Snow White with the Red Hair” begins, as many a fairy tale does, in a land far away and a time long ago; a fantasy Europe, with castles and fields and villages powered by horse and by hand, in which we are first introduced to our protagonist, Shirayuki (literally Snow White,) after she sends the medieval equivalent of a middle finger to the crown prince and runs away into a neighboring country to escape his clutches. Disney version, this is not.

Akiduki’s talents lie in their strong sense of characterization and their confident figure work & backgrounds. Manga, and shojo manga in particular, do not generally place a high emphasis on full backgrounds. In part, this is due to the grueling pace of the manga industry, shonen being particularly fraught due to the weekly schedule, while most shojo manga operate on a twice monthly, monthly or bi-monthly schedule. The other reason is that much of the focus is on the characters and what they are saying, which can obscure and hide background environments, turning them from an enhancement to the work into a time sink for an already time pressed artist.

“Snow White with the Red Hair” originally circulated in LaLa DX, a bi-monthly magazine, and thus each of these chapters was produced on that schedule, giving Akiduki the time to produce these well formed environments. It’s unfortunate that, at times, especially in the opening two chapters, it gets buried beneath a glut of speech bubbles. For those who have never read a shojo manga before, this opening chapter will be a tough one to begin on. Standards of the genre include conversations and narration that overlap and break, with small, unimportant asides layered in between that help add that extra bit of reality to the world. It’s a true to life way of representing speech and thought, one that can only really be captured in comics, and only really taken advantage of in shojo manga.

That said, following each individual chain can be difficult and Akiduki does not make it easy in these chapters. The moments when it is solely Zen, the prince charming analog, and Shirayuki tend to be the most confusing, interestingly enough, as Shirayuki’s internal monologue spills out onto the page, interrupting the conversation they are having. It can be frustrating but as the chapters continue, this lessens and a good balance is struck between readability and the traditions of the genre.

When this happens, it becomes much more apparent how good Akiduki is at using the page for gags, action and those small character moments. Even something as mundane as re-planting soil is made exciting thanks to the way Akiduki chooses to frame each moment and because of the strength of the characters. Zen and Shirayuki are a joy to be around and to watch on the page. There is a sense that, even just four chapters in, they have a genuine bond and chemistry that, at the moment, manifests through mutual respect. Does the narrative sometimes tread in familiar, cliched territory? Yes, especially in chapters 1 & 2, which use the “creepy dude wants girl for his harem because he sees her as an object” and “hero gets kidnapped” tropes, respectively.

However, Akiduki uses them as opportunities to push back at them, with chapter one opening on an act of self-determination and defiance and ending on the creep, who is ineffectual at best, getting a royal beat down and chapter two spending most of its time having Shirayuki outsmarting her kidnapper and escaping. Unfortunately, in both cases she is still saved from her fate by the Prince Zen.

On the other hand, by chapter three, the narrative makes it clear that she not only can and does hold her own entirely, but this is only the start of her journey. She is not the traditional damsel in distress — although she may play more into japanese stereotypes of what makes a princess, i.e. a collection of idealized traits, than the original disney style princesses, which is an academic paper for someone who’s much more knowledgeable than I — nor is she defined by what the people around her desire.

She is firmly her own person, rooted in a trajectory that is her own and while this volume does not get too far into that path, it lays the groundwork and provides enough reasons for us to want her to succeed and for us to follow along. It begins the hard work of setting up the central romance and the tensions contained therein, of building a larger cast in a larger world, and does so with confidence and, for the most part, succeeds. The supporting characters and antagonists are a bit thin in their characterizations, serving as more as archetypes but there are moments that complicate them, turning them from stock characters, to simply ones we haven’t gotten enough time with.

It’s ironic, too, because the biggest problem volume one faces is that pacing is way, way too fast. Chapter one has it the worst, which makes sense, as it was originally a one-shot, but the events fly by without enough time to breathe. Page 1 rushes through what is a really important and powerful moment in order to get Shirayuki into the woods and to meeting Zen and the breakneck pace with which information is conveyed to us and events occur means that one cannot catch their breath before being whisked away into the next plot point. A lot happens in volume one and the forward trajectory of Shirayuki makes me wonder if, by the end of volume three, she won’t have already accomplished her goals.

While the story itself may feel rushed, it is clear “Snow White with the Red Hair” has a lot of potential thanks to the strong, expressive art and endearing characters. It won’t be for everyone, and it isn’t the strongest opening volume, but for fans of the genre, this is one that shouldn’t be missed.

Final Score: 6.7 – Held back by the opening chapter and continued rushed pace, this is still well worth your time, especially those craving that new fantasy romance series that just refuses to get published by American comics companies.