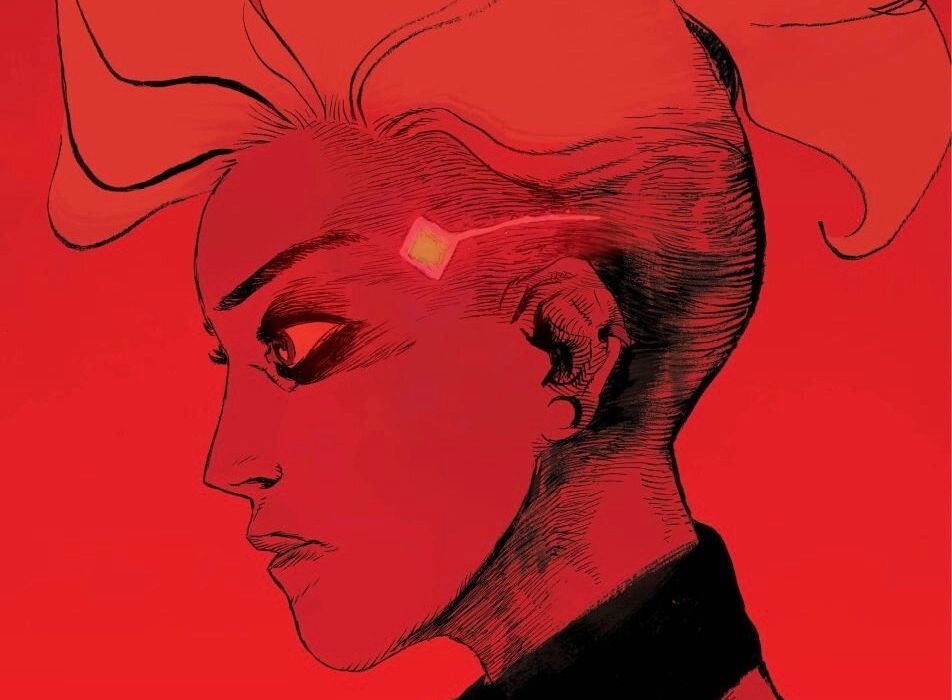 In the follow-up to their stellar debut, writer James Tynion IV and his co-creators deliver a quiet, yet unexpectedly menacing issue that cranks up the weirdness and raises even more questions. (Warning: may contain minor spoilers.) 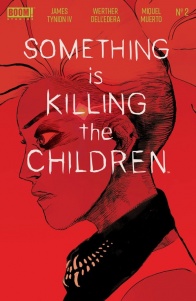 Children are dying in the town of Archer’s Peak and the ones who survive bring back terrible stories. A strange woman named Erica Slaughter has appeared and says she fights these monsters behind the murders, but that can’t possibly be true. Monsters aren’t real… are they?

Recently, writer James Tynion IV described his new creator-owned series “Something is Killing the Children” as more personal than he ever intended. He’s also said it comes from “the darkest possible emotions” that he dares to explore. A succinct, unvarnished summary of the creator’s artistic intentions – and deceptively tricky achievement – is well articulated in this almost offhand statement: “I wanted the horror to feel real and that meant grounding it.”

Whether in the form of movies, comics, or books, the catchall category commonly known as “horror” often incorporates other speculative elements, too. Adjacent genres and sub-genres like dark fantasy, thriller, and suspense are just some of the most common. In visual mediums, for all of the obvious reasons, there’s not exactly a shortage of “slasher” and “splatter” pieces. For the most part, of course, these distinctions don’t really matter. They’re simply a kind of shorthand that boils things down to their essence to let the audience know exactly what they’re getting into.

The sophomore issue of “Something is Killing the Children,” by way of contrast, is not quite so easily pigeonholed.

The debut issue was solid, but ultimately pretty straightforward, derived from some common tropes without feeling derivative. It was highly relatable, too, and that’s a big part of what made it extra creepy and tense. It was graphic, stylish and bloody and featured a great cliffhanger that gave you someone to root for. Two people, actually. In the end, you put down the book couldn’t wait to see what happened next.

The opening sequence of issue #2 is visually easy to follow and exceedingly well constructed, but it kind of comes out of left field, introducing us to a mother, her live-in adult son, and their heartbreaking mourning routine. With a desaturated, almost monochromatic palette from colorist Miquel Muerto and heavy shading under the eyes of the two characters by illustrator Werther Dell’Edera, it’s literally a study in the face of human tragedy. With panels that frequently frame the characters’ faces uncomfortably tight in cinema verité style close-ups, their sadness is palpable, their loss inescapable. Tynion IV’s unadorned dialogue powerfully drives the point home. When the son reassures his mother they’ll find his missing sister, she responds flatly, “You don’t believe that. But you don’t know what else to say, and that’s okay.” He grabs a stack of fliers and heads out the door to go to work. Suddenly, by his car, there appears a horrific presence, but apparently he can’t see it. It’s only revealed to us.

Much of the rest of the book functions in the same way, with characters engaged in surface level dialogue that seems to mask a sinister presence below or beyond or lurking at the edges of their perception. In fact, our experience is almost exactly the same. It’s not what we see and read that creates tension and terror, it’s the things that are left unsaid and the images left out of the picture. In that way, the book’s long title is a perfect analog. Tynion IV straight-up tells us, something is killing the children, but refuses to give us the solace of knowing what that is. He gives us a partial truth, but conceals the rest of the story, and it’s a hell of a lot more scary than simply saying up front, “A Big, Powerful Monster with Razor Sharp Teeth and Claws is Randomly Killing the Children.” The true terror lies in confronting the unknown without having a clue what you’re really up against.

Enter the cheekily named, indefatigable “monster hunter” Erica Slaughter. We met her in the first issue, emerging from the woods streaked and spattered with blood, a fearsome machete in each hand. She already knows what she’s dealing. A notorious Class E7, whatever that may be.

Without a doubt this issue is much slower paced than the first and not anywhere near as bloody. With much of it set in a restaurant utterly devoid of patrons, it can feel pretty reminiscent of the infamous Agent Cooper endlessly sipping coffee at the Double R Diner in Twin Peaks. The twist is that Ms. Slaughter drinks both beer and coffee, with one bright green smoky eye silently judging you from afar, while the other remains hidden behind a conspicuous, unruly lock of blonde hair.

Truth be told it’s a lot of pages in the same cavernous, soulless location, but that’s precisely the point. Throughout this seemingly endless yet somehow tense and intriguing scene, the all-but-lifeless colors; the thin but expressive lines; the sharp, witty dialogue; and the workmanlike, easy letters work together beautifully to create a moody, atmospheric world that feels grounded and unnerving. Add to that a few subtle surprises – the last four pages are not to be missed – and it’s abundantly clear, not everything is what it seems.

Hey, at least they have big tables.

Final Verdict: 8.6 “Something” #2 takes bold creative risks to strike a wonderful, delicate balance between highly relatable and deeply disturbing. The fact that the two mesh together so seamlessly just makes it all the more unsettling.