Paramount has given us a gift in the form of a Sonic the Hedgehog trailer that is so awful, the only way to cleanse ourselves of it is to read something that doesn’t have Sonic’s horrifying human teeth. Let’s see if IDW can not make the same mistakes as Paramount. 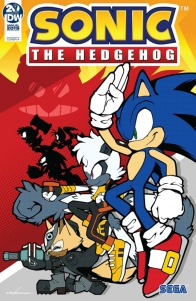 In Sonic’s world, adventure awaits around every corner, but even the world’s fastest hedgehog can’t be at the center of all of it! Join Sonic and some of his coolest friends in adventures that show just how wonderful Sonic’s world really is.

In the lead story, the odd couple of Tangle the Lemur and Whisper the Wolf team-up to save a friend in need! Then Sonic and Tails take the Tornado for a spin, but is Sonic going too fast? Plus, Silver and Blaze slow down for a minute to go gardening, the Sonic Fan Club has their first official meeting, and Rouge the Bat hunts for treasure!

“Sonic the Hedgehog Annual 2019” is an anthology piece, meant to highlight the solo adventures of many of the extended Sonic universe characters, of which I am only familiar with through promotional materials for the games and show. While this is not much of a barrier to the enjoyment of the stories themselves, the focus on mostly side-characters throughout means that newcomers have a steep learning curve in order to get the most out of these stories. The third story, ‘Victory Garden’ featuring Silver the Hedgehog & Blaze, is perhaps the one that suffers the most from this.

The story itself is nicely self-contained, with an atmosphere of melancholy that isn’t present in the other stories. It makes the tale stand out as much as it can while still retaining the “Sonic” style of art. However, the story feels like an epilogue to an arc Blaze & Silver had recently gone through, reading more like the end of an adventure and a small exploration of the aftermath. Because of this, the greater context is lost and the impact of the tale is lessened. A few lines of context or some more room to breathe would have benefited the story immensely.

The opposite is true of ‘Bonds of Friendship,’ the first story of the collection, which focuses on the IDW comic exclusive Whisper, Jewel, and Tangle. This story feels like it goes on too long, spending a page too much on the villains’ bickering. Were it funnier, these pages would not have dragged on as much. The artwork, too, while charming and expressive, brimming with the kind of energy needed for “Sonic,” feels flatter than it should, perhaps due to the coloring or perhaps due to the art. Either way, the depth of field of the images is lost so the foreground characters look like paper cutouts while also, at times, blending too much into the background.

The only story that manages to feel like its own thing while still retaining the carefree nature of the annual is the final story, ‘Sonic’s Fan Club.’ The paneling here is what really sets it apart. Gray isn’t afraid to play with page layouts and the borders of their panels are treated with the same eye for humor and energy as the characters and environments. The coloring too feels less like the highly polished other stories, giving the story more character and making the jungle environment feel more alive. ‘Sonic’s Fan Club’ ends on a “womp-womp” moment, which might get an eye roll or two, but the sheer fun of the preceding pages will keep a smile on your face and a chuckle in your chest, even after the groan escapes.

Of the two remaining stories, only the one focusing on Sonic remains of note and that is because it has Sonic and Tails in it! For a comic named after him, you’d think the titular hedgehog would have more to do. It does hurt the comic, especially since the cover promises eggman but there’s no Dr. Robotnik anywhere. Instead, we get a nice comic that feels like a dramatized section of the video game. The interplay between Sonic & Tails is nice, and you really feel their personalities come through. While the dialog can feel a little stilted at times, the line about there being too much power coming to mind, overall it’s a nice throwback to the flying levels of early Sonic games. Plus, it’s the only one that seems to run on the logic of the video game.

The big takeaway here is this — “Sonic the Hedgehog Annual 2019” isn’t anything special. It’s a well-done but standard entry that treats readers to a series of fun stories that feel superfluous to whatever narrative is being told elsewhere. This, however, is the usual purpose of an annual. To give that little bit extra for fans of the series and to provide stand-alone adventures for those who may want to check out what all the hubbub is. For that, “Sonic” did its job.

It’s hard not to have fun with these stories. Despite the characterization of the non headlining characters being pretty thin — Whisper, Tangle and Jewel being noticeably onenote in their personalities and interactions — there is an underlying charm that has you rooting for the focal heroes. The artwork is bouncy and energetic, all being similar enough to retain visual consistency but altered in the ways that fit the tone of their respective stories.

Fans of the IDW series will certainly enjoy the added stories while newcomers will get a glimpse into that world, its unique characters and the tone they could expect. Just don’t expect it to blow you out of the water.

Final Score: 5.8 – “Sonic the Hedgehog Annual 2019” is nothing special but a lot of fun. It’s certainly leagues better and less terrifying than the Sonic ‘06 adaptation Paramount seems desperate to make.