I am terrible at reviews for many many many reasons. Ask our editors. My spelling is the worst. Grammar is almost a foreign concept to me. My anxiety riddled brain pumps out sentences which make perfect sense to me but any semi-sane person can not comprehend. I have also always struggled with the idea that something I like or don’t like would be a valid opinion to anyone other than me. There is often merit in books I myself do not enjoy. In the same respect I often feel there are books that may not have got the love or respect that I felt they deserved. “Sovereign” from Chris Roberson and Paul Maybury is one such comic. 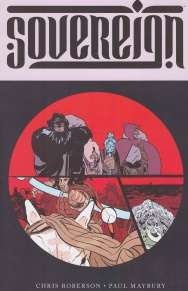 An epic fantasy in the tradition of Game of Thrones, Sovereign is set in a world which once knew gods, demons, and magic, and to which all three are returning. New York Times bestseller Chris Roberson joins artist Paul Maybury to tell the story of masked undertakers facing the undead with swords, of civil wars and cultures in collision, and of ancient threats emerging from the ashes of history to menace the future.

“Sovereign” is for me a perfect example of why art and entertainment is for the most part subjective. This always seems to be an ongoing debate especially for people doing reviews of comics, movies, TV, etc. Why is what I think is good, good? Just because I think something is good is it? Blah blah blah. There are so many things about this series that I enjoyed but for others just did not hit the mark.

“Sovereign” has a unique story structure. For the first few issues, it told the story from three perspectives in small chapters. We first meet the Luminaries, a group of outcasts who tend to the dead of the world. They leave the confines of silence to warn the world of the coming danger. The next group is made up of the sons of Sanram Rahn, the emperor of Khend. He dies and does so without naming a successor. This story follows the debate and conflict that ensues between his three sons. The last group we meet is an envoy from Albelund, on their way to meet with the emperor. The three story lines collide at the palace as the recently dead emperor returns from the death and the city outside is thrust into similar chaos. That is the story in the most simplest of descriptions.

The series drops you into this living breathing world with decades of history. The characters are already amidst their own journeys, which is then steered towards this grand conflict as we meet them. When the stories converge they do so in a what feels like the most logical path. When all three parties are brought together it is easy to accept the urgency that each express for their need in the story. This style of storytelling and world building is one that can put people off. Readers are given very little at the start of the story and in the very first issue are introduced to three different stories with different characters, cultures and lore.

There were probably many different ways Chris Roberson could of approached this story but I think it was this specific way is why I enjoyed it so much. “Sovereign” is a book that long stuck with me. I was fascinated by the world Chris and Paul laid out in issues 1-5. I wanted to know more and see more. To me that is product of something good. I know I don’t need everything spelled out for me. I want it. Of course I do but that does not make me right. Often what I want is the wrong choice. The story is broken up into chapter breaks for each narrative. There are prose at the end of issues to further build the world and lore out. It is a story that can be enjoyed on the most basic of levels but also has a richness to it if a reader wants to dig in.

Chris Roberson had talked in interviews about drawing inspiration from India in the 17th century, its rigid caste system and being ruled by a group who invaded the country years before. “Sovereign” attempts to touch on those topics, especially the caste system. I think Chris is attempting to take on a lot with this series. While it works for me, I can see where it can feel incomplete at times. There are a lot of characters and story lines trying to work together in the five issues in volume one.

I believe much like this style of storytelling Paul Maybury’s art seems to be a love it or hate it with comic readers. I love the very loose and flowing brush work of Paul’s style. I love the range Paul’s art can provide. The Luminaries have a really great design as well as many of the creatures in the series. Paul also excels at the detail in the world and culture of each group. I have seen complaints about the way Paul draws people in the series and for me that again is something I personal enjoy. His people are not pretty and have very distinct features. It a good mix of realism and cartooning that for me work in a fantasy world which is often a cartoon version of our world.

Paul provides some really dynamic panels and layouts in the series. In the first issue alone there is a panel of a horse lord riding straight ahead at the reader firing an arrow right at the reader. In another segment the envoy encounters a decaying finback that is barreling toward their ship like a scene out of Jaws or Godzilla. Again like the story I think there is a surface level appreciation one can have for the art but if a reader wants to dig deeper into what Paul is doing there is a lot more there.

Obviously, now years removed from the series, the ending is disappointing. The series took five issues to set up this threat and ends at a very tense moment for the characters and the city. Ultimately nothing has come out new since that fifth issue. The last portion of the book introduces readers to a new female character who unlike the other characters gets an more traditional introduction and point by point narrative. To have it go out on this note is tough but not a fault of the overall story or characters. Stories are told by people who have lives, obligations, families, deadlines, etc. It would not be fair to penalize the story for not wrapping up. It would be a greater sin to me if it did finish and the ending was bad than just not having an ending.

In the end “Sovereign” is a series that sets out to tell an epic fantasy story in a different way. Collected in a trade paperback I think it is easier to digest this style or story telling that it might have been at the time of its monthly issue release. Chris lays out a vast world with a lot of interesting ideas and cultures. He has talked in the past about how he originally envisioned this story as a novel and it is easy to see how that would work. Paul Maybury’s art is distinct and beautiful. Paul does just as much as Chris to build a rich and dense world. Is this series for everyone? Probably not. Do I think it is good? Yes, I do. It tries something different with the medium and I will always find that worthwhile.