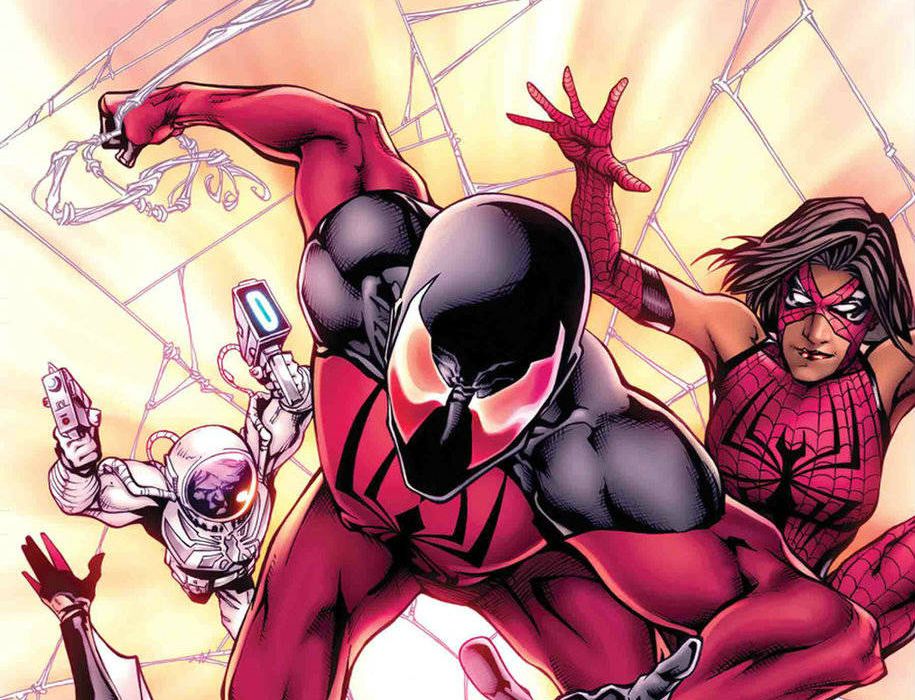 “Spider-geddon” has begun, bringing us a sequel to the “Spider-Verse” event. With more Spider-folk to encounter, how will this story stand out from the other Spidey events? We have a new assortment of arachnid-based heroes to follow, so let’s check out how a Spider-Man version of X-Force goes.

Keep in mind, there will be the occasional spoiler. 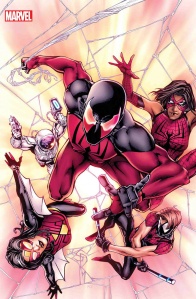 A SPIDER-GEDDON TIE IN! The deadliest task in all of SPIDER-GEDDON has come up and Kaine has stepped forward for what he’s sure will be a suicide mission. But he can’t do it alone and Jessica Drew, A.K.A. Spider-Woman has signed on to help, but has Kaine told her the whole truth? With Ashley Barton, from the OLD MAN LOGAN universe, and two new characters (Astro-Spider and Spider-Kid), Kaine’s team is complete and their first mission may be their last!

There’s no denying that there’s a lot to follow for the various “Spider-geddon” events. “Spider-Force” gives us a good mix of existing and new characters, and while readers might not be familiar with all of them, we get a good grasp of who they are from what we’re given. For instance, readers unfamiliar with the “Old Man” universe might not know anything about Ashley Barton, but her brief fight and banter with Spider-Kid reveals her personality, skills, and perspective.

Similarly, when we’re introduced to Spider-Kid, we’re not given his whole life’s story. Instead we’re just given enough bits and pieces of it to figure out who he is in this multiverse. Off-hand comments about his version of Uncle Ben and a quick comment about how his parents died let us know a little more about his history, and while we may learn more as it goes, what we have is a good start. Christopher Priest has provided everyone with a solid voice and good sense of banter, making it easy to get to know and like the characters.

The story itself begins in the middle, before flashing back to a “how we got here” story. It instantly sets a tone of danger, indicating in no uncertain terms that at least a few of them are likely to die. Readers know early on that they’re not in for a happy story, because nothing says “not your friendly neighborhood Spider-Man” like flooding a subway tunnel full of bad guys with radioactive water.

The in media res introduction does set the stage for the conflicts to come, including battles against the Inheritors and rabid, mask-wearing versions of some iconic “Spider-Man” foes. Brief though it is, the action is intense, automatically setting up a hectic fight for survival.

However, with their fate set, there is an ominous cloud hanging over the story as it leads them up to it. This is true for none more so than Jessica Drew, who initially refuses the call because she has a family to protect. Kaine knows this, yet he clearly crosses a line when the mission begins by shorting out the spider-watches to trap everyone in the irradiated world they travel to.

Look, Kaine, if you’re going to do a suicide mission, at least let your teammates know ahead of time. Otherwise the one with a child to raise back home might be a little upset. Kaine has never been the nicest of the Spider-clones, typically being an anti-hero at best, but don’t expect to come out of this issue liking him for the decisions he makes. Although he’s portrayed as a man willing to do whatever it takes to succeed against a dangerous threat, and Christopher Priest’s writing makes it clear that he’s dedicated to the task and cause, it’s a tough moment to take when you consider what he pulled.

Visually, there’s nothing to complain about. Paulo Siqueira does the pencils, with Oren Junior and Craig Yeung inking. Their artwork is solid throughout, with distinct character designs and some really nice shading that adds to each scene. There’s even some nice touches with the ways the panels are laid out; for instance, we get a scene where a train is struck by an oncoming wave of water, and the panel itself is tilted to the side as though from the force of the hit. It’s a nice touch that enhances the impact in a subtle but effective way.

We get two new character designs in this issue, and I like them both. Spider-Kid’s outfit is something of a sleeveless Spider-Man, using the red and black color scheme. Rather than a full mask covering his head, he pulls it up to cover his face, leaving his hair free.

Astro-Spider, meanwhile, wears what is essentially a spacesuit with a Venom logo on it. And unless his world’s version of Peter Parker dyed his hair and got entirely different cheekbones, it seems that’s Flash Thompson (often a Venom or Anti-Venom himself) in the suit. If I haven’t said much about Astro-Spider yet, it’s because he’s only introduced at the end of the issue, so we can’t say much else about him, but the way he’s drawn in his introduction – with the reader and characters looking up at him, his white suit shaded partially in the darkness of the irradiated world – makes for a fine introduction.

Guru e-FX adds a lot to each scene and design with the color work. The overall color schemes of each world seem to shift just a little bit, from the green, radiated tint that everything in Earth-3145 has to the earthy orange backgrounds of Earth-218 and the blue tones of Earth-616, it adds a different flavor to each dimension without needing to do anything crazy with the designs.

Naturally, there are plenty of reds and blacks with each of the character designs, but the range of colors used around them work well with the characters. The color work is clean and solid, and Guru e-FX works with the lighting effects to add nice shades to each character and moment.

Overall, “Spider-Force” sets the tone for one of the darker tie-ins to the “Spider-geddon” event. The artwork looks great, with a combination of solid designs and sets from Paulo Siqueira and great color work from Guru e-FX, and the story hits the ground running while introducing readers to the characters in a natural way. It may not be everyone’s cup if spider-tea, but if you go in knowing what to expect, you may enjoy it too.