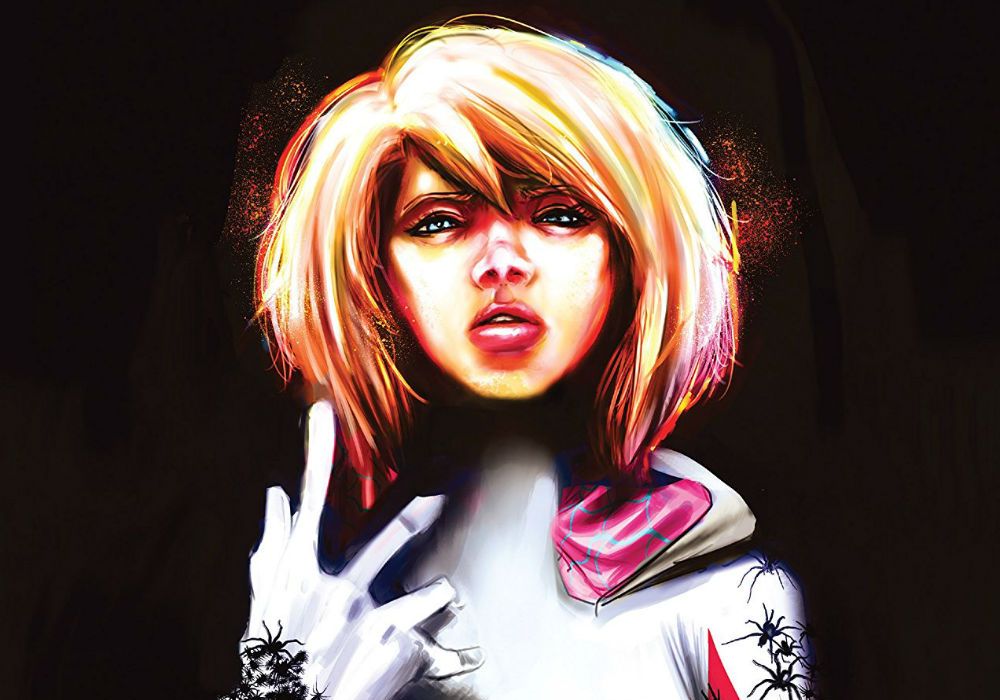 “Spider-Gwen” has set the stage. The light have dimmed and the curtains rustle. The audience has gone quiet, preparing for the main performance. Then, the curtains rise and who greets us? Not the Gwenom we were promised but none other than Spoilers. Sigh. At least now I can judge the whole arc. 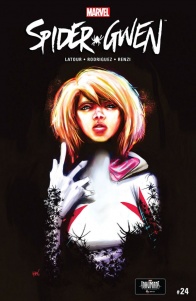 The aftermath of the PREDATORS storyline leaves Gwen in a VERY different place. Matt Murdock’s plans all come home to roost, and when you plan like our good friend Murderdock does, you know that ain’t pretty. WHAT IS THE NEXT EVOLUTIONARY STEP FOR SPIDER-GWEN?!

We’ve done it y’all. We’ve pushed through and finally arrived at the end of this long, long arc. I know I’m being a bit dramatic but at this point, with all the Gwenom hype, this has felt like the longest “Spider-Gwen” arc to date. It dragged its feet, like there was some editorial mandate to delay Gwenom’s appearance until they could get their Venomverse up and running. It gave us a couple ill-defined alt-universe versions of some our favorite heroes and made an interesting villain feel like the reincarnation of Judas Traveler. This is no more apparent than here.

If it seems like I’m frustrated, it’s because I am. Last month, we got a wonderful breath of fresh air that, which technically a diversion from the main plot, made me nostalgic for the early issues of this series. It was fun, focused on the group dynamic of Gwen’s friends, and made the series not feel like a “best of Spider-Man” comic.

Let me get into the weeds of why this issue just hits all the wrong buttons for me.

First, though, I should get this out of the way: I was, and am still, excited for Gwenom. I think her costume (much like the Spider-Gwen costume) is really cool. It’s got this punk rock feel to it, with Gwen’s hood becoming the symbiote’s mouth and its tongue and teeth snaking down the costume, coming off it like a tail. It makes the symbiote feel like it’s more than just a costume; it’s now a part of Gwen, even giving her an additional appendage to attack with, and is even thematically reminiscent of the Lizard, who had his own struggle between the human and the monstrous (which, were this arc to have been contracted more tightly, could have been much more impactful).

Rodriguez’s art, too, is varied and exciting, especially after the fight with Venom-Wolverine. Did I mention Wolverine got possessed for half the issue? No? Well, he did. It was a waste of pages and Venom-Wolvie’s design isn’t nearly as interesting as Gwenom’s. He has black samurai armor and his hair is darker with an orange stripe and V-shaped . . . scary.

Jumping back to the technicals, as I’ve said many times, Rodriguez is very good at depicting motion and making characters move with purpose. He uses the wide, edge to edge panels to his advantage, stretching characters to show the extra-ordinary speed their traveling at and to really give a large scope to the events and the darkness of the symbiote. You can tell that the second half of the comic is where the passion for this arc went.

The pages after Gwen frees Wolvie from his filler-induced possession feel slower, more thought-out, the art more solid, more detailed, more raw. When Gwen uses the sound to try and hurt the symbiote, Rodriguez makes the black, swirling goo look large and overpowering, placing it in between us, the reader, and Gwen, who now literally has her back to the wall. The normally bright, neon colors drop away for a rich, dark pallet, making Murdock and Gwen stand out against it. We see Gwen’s confidence slowly fall away until all that’s left is her desperation and a panel of her, lit only by the light of her phone, covered in darkness, afraid of losing it all.

This section of this issue is where we should have began. Wolverine was a distraction, the Matt Murdock cut-aways were a distraction – the meat of this is story has, and always will be, Gwen’s struggle with what makes a monster. The first issue we ever got, in “Edge of Spider-Verse” #2, showed Gwen coming to terms with the fact that she accidentally killed her best friend, thinking he was a monster. This repeated again with Harry Osborn and, on the flip side, with Frank Castle and her father. She had to prove to others that she was not a monster, that she was not a menace.

Were this issue to have cut out the opening bit with Wolverine and Shadowcat and instead given us this battle – between Gwen and the symbiote, between the woman and the monster – and shown her despair at her father’s condition, this would have been a much, much stronger issue. Those scenes could have been decompressed more and not felt like we had just been rushed through a very big moment. The internal fight between Gwen and the symbiote, as represented by the costume morphing and changing, is a great detail, cluing us into how the symbiote works and what feeds it. Little details like these help keep me invested.

Rodriguez and, I’d also argue, Latour got dealt a bad hand by this issue. They’d been written into a Wolverine-shaped corner and were beholden to keeping him relevant to the narrative. Had he and Shadowcat not been introduced earlier (or even if they had been a presence in this series for longer), we wouldn’t have had to find an excuse to have them leave the battle.

Latour was also stuck with Murdock and his ill-defined, still goal-less crusade to get the symbiote to bond with Gwen. Why he did this and why we had to watch every small step is beyond me.

Murdock had probably the most interesting set up next to Gwen, make him the Kingpin of this universe, with all the bravado and charisma of main universe Matt, only set him to be evil and a master manipulator. But, instead of us seeing a man at the top of a criminal and underground empire, we see just another super-villain who enjoys messing with our hero, who’s only purpose is to be antagonistic. He wants something from Gwen, sure, but since we have no clue as to what that is (it’s hinted at, I guess. But with the amount of time we spent watching the set up for George Stacy’s beat down, you’d think we’d be clued in a little more.)

We also, as with most of the characters on Earth-65, don’t really know his backstory: how he became the kingpin, what motivates him, what does HE care about. All these are important questions that really should start to be answered soon. The best guess I’ve got is that Matt wanted/needed Gwen to be possessed by the symbiote. Why? That is a question for next month’s issue.

All in all, this is an issue that couldn’t have come too soon. It’s padded, sure, but we’ve finally got the full appearance of Gwenom. It was a long arc that could very easily have been much better. By taking the focus away from Gwen and her friends (specifically her ties to the Mary Janes and Harry) and onto the heavily telegraphed beat-down of Gwen’s father as well as Wolvie-65, we lost a lot of what could have been a very engaging arc. I said in my first micro review of this arc that the slower, character moments were where Latour’s writing shone and the story flourished. This is still true. I only wish there were more present.

Final Verdict: 5.9 – After last month’s issue, this feels like one step forwards, four steps back. Still, Gwenom looks rad and I’d be lying if I said I wasn’t excited to see where this leads. Whether it disappoints me or not… that’s a whole ‘nother story.