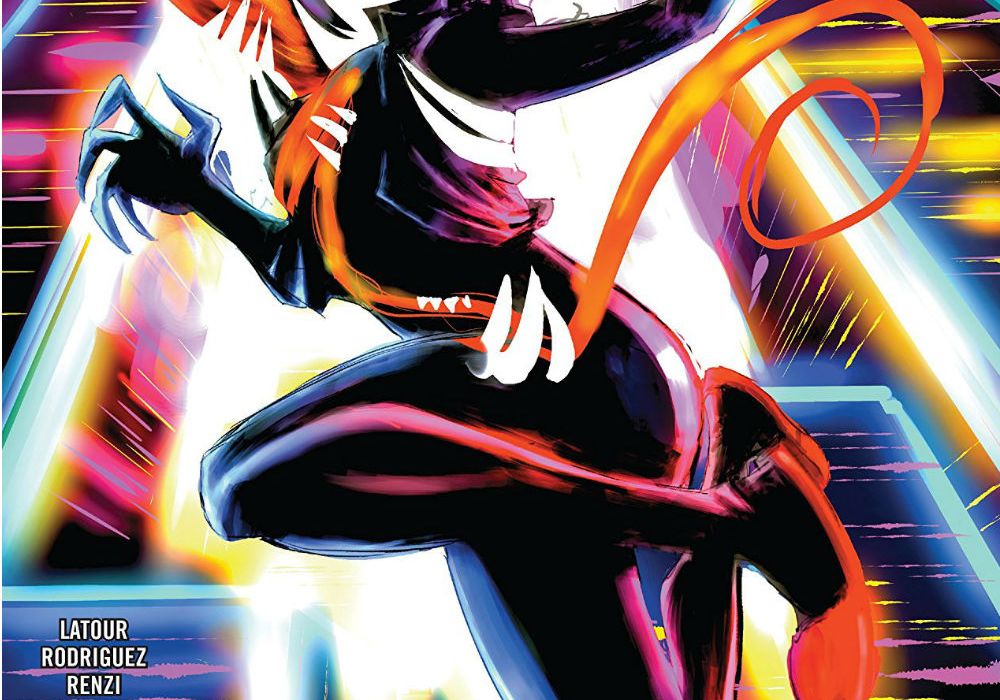 Spider-Gwen is gone, buried deep beneath the Gwenom, a creature of wanton destruction and pain, feeding off the Gwen’s rage and insecurities. Although, maybe the control is not as full as it could be. Spoilers for the start of what will, hopefully, be a great, new arc. 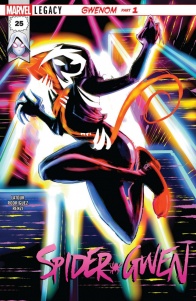 Gwen’s life irrevocably changes as she bonds with her universe’s version of the Venom symbiote. What does it mean for her relationship with crime kingpin MATT MURDOCK? With her father? With THE OSBORNS?! Is any relationship in Gwen’s life safe? It’s SPIDER-GWEN like you’ve never seen her before, and this time, there’s no easy fix for her troubles! PLUS: Includes 3 bonus MARVEL PRIMER PAGES! Story by Robbie Thompson and art by Mark Bagley!

This issue only reinforces my theory that the introduction of Gwenom was supposed to have occurred much earlier than it did, being pushed off by Marvel’s Legacy initiative. This issue acts as a great jumping on point, recapping all that has happened up until now succinctly on a two-page spread, which Rodriguez splits between the Gwen (and Spider-woman) centric top and the Murdock (and Gwenom) centric bottom. It starts with a new status quo and the story wastes no time kicking into high gear.

For those of you who have been following my reviews for a bit, you know I did not enjoy the Predators storyline. It was long, bloated, and was very obviously biding its time for the arrival of the much more interesting story of Gwenom. Now that the long awaited (and teased) moment has arrived, does it live up to that lead up? And does it make up for the lackluster last arc?

Story wise, Gwenom is a step up, bringing together many different threads and layering them in a way where each one felt necessary to build up a bigger picture. The Mary Janes return (yay!) and, through them, we get to see the concern they’ve got for their friend and the way that the public at large is seeing Gwenom. We also follow mysterious bearded man as he stalks Gwenom from afar, beginning the start of a sub-plot that will most likely deepen the character, a development I am looking forward to.

Then we have Gwen herself. She spends most of the issue doing her best batman impression and indulging in some very villainous actions. For all the jokes I could make, or all the snark I could give, for Gwen’s full lean into the anger, it wouldn’t do justice to the work Latour and Rodriguez have done to make this Venom feel different than other representations.

Gwen isn’t a villain (unlike original Venom or Carnage) and doesn’t have that period with the suit that 616-Parker has where he is mostly in control. Instead, it’s just her, in all her rage and grief, attempting to fight her own demons and the demons that have been thrust upon her. It’s also not just “evil,” it takes all the worst urges inside of Gwen and amplifies them, turning them into a literal extra voice in her head. Through the narration, Latour really sells the idea that Gwen is mentally controlled by the symbiote, instead of physically. The opening narrations from Gwen, when she’s listing the various easy, hard choices she used to be able to make, works because of the symbiote’s responses. To the choice of “Stairs or elevator,” the symbiote responds “couuuuuch.” To her anger at the uselessness of Fancy Dan’s informative RRRGH, the symbiote responds with the lie that she, herself, is useless, feeding into the powerlessness she feels after her perceived failure to save her father.

Yet Gwen knows that it is a lie, or at least a harmful exaggeration of the consequences of her actions and the machinations of Murdock. So, she fights, attempting to quiet the ever growing voice of rage and anger and destruction, the voice that our dear friend Matt hopes to be let out.

Rodriguez turns in a solid issue this time as well, refining some of the clarity issues from the previous arc’s fight scenes and slowing them down enough so we can follow the action. It’s not perfect, the early fight could have used some more decompression (a lot happens between panel one and panel two), but by using the widescreen format and keeping the pace quick, we got the feel of the fight, in all its brutal swiftness.

Plus, it allowed for a great reveal panel of Gwenom towering over Fancy Dan, the symbiote suit oozing and morphing, delivering a line that bridges us into that montage of pain I talked about earlier: “Okay boys…We try it your way…We speak your language…We will share our pain.” Admittedly, the line itself is kind of silly, but in the scene, it works.

What doesn’t work so much is the design of the Rhino. I get that he’s supposed to be big and intimidating but having him be so large that a shot glass looks like a thimble, as well as being grey (one of Renzi’s few coloring missteps) is a step too far into the caricature. He feels less like a character now and more like a visual punching bag who’s only role is to further the plot and then disappear…which is exactly what happens.

I’ll also say it now, and I’ll probably say this until I stop reviewing a Rodriguez drawn issue, but the rubberiness of his characters’ movement as well as the more impressionistic nature of his backgrounds, especially when they’re filled with smoke, can be a big distraction. It is a stylistic choice that not everyone loves and while I can tolerate it most of the time, there are instances that don’t work for me. In this issue, Frank Castle’s gorilla hands and Mary Jane’s suddenly under-detailed face were the biggest distractors for me.

Although, this is balanced out by some scenes of great tension and action. In the same couple pages as Castle’s gorilla hands, there’s the scene of Fancy Dan being hung over a street by Gwenom as she slowly slices the webbing with her pointed, clawed hands. When she leaves, we get a panel of Fancy Dan’s terrified face as Gwen, silhouetted in pink behind him, thwips away, leaving Fancy Dan hanging, the next panel, which is all black save for the whiteness of the webbing, shows what little threads of hope he has left, start to plink away. It’s small but indicative of Gwen’s hyper-focused vengeance quest and the ill effects of the symbiote beyond just her temper.

I’ll close this review out by touching on Matt again but first a quick digression. There was a lot to digest in this issue but it was layered in a way that felt like there would be payoff later on down the line, something that the last arc really missed. Frank Castle’s resurfacing as a possible ally, Ben and May Parker’s reintroduction, the Mary Janes’ hunt for Gwen, Gwen’s own wrestling with the possible loss of her father at the hands of the Rhino as well as her failure to keep tempering the symbiote – all this and more are teased out here and instead of crowding the issue, it all revolves around a central point: Gwen and her response to grief…as well as Murdock’s still vague but less frustratingly vague plots.

I have complained a lot about Murdock and his plots that seem to do nothing of value for him and while we don’t really get any clear plans in this issue, we finally get to see the wheels upon wheels that turn when he puts a plan into motion. The whole climax of this issue was manufactured by him; he gets Rhino drunk, sicks Gwen on the Rhino, sicks the police on Gwen with weapons to neutralize the symbiote and cameras to further tarnish her record, and then runs away using the portal band after goading Gwen into letting him go, further undermining her own emotions. That’s a lot to set up and it shows just how powerful he is and how saavy he is.

It’s the kind of thing we needed earlier and that is probably the most frustrating thing about Gwenom’s appearance. It is an arc that should have happened earlier, even by a couple issues, but that doesn’t take away from what Latour and Rodriguez have done with it so far. Let’s hope they can keep it up.

Final Verdict: 7.3 – A return to form, even if it is a different form, for the ever changing Gwenom. Hopefully we don’t ever have to see the Rhino again.