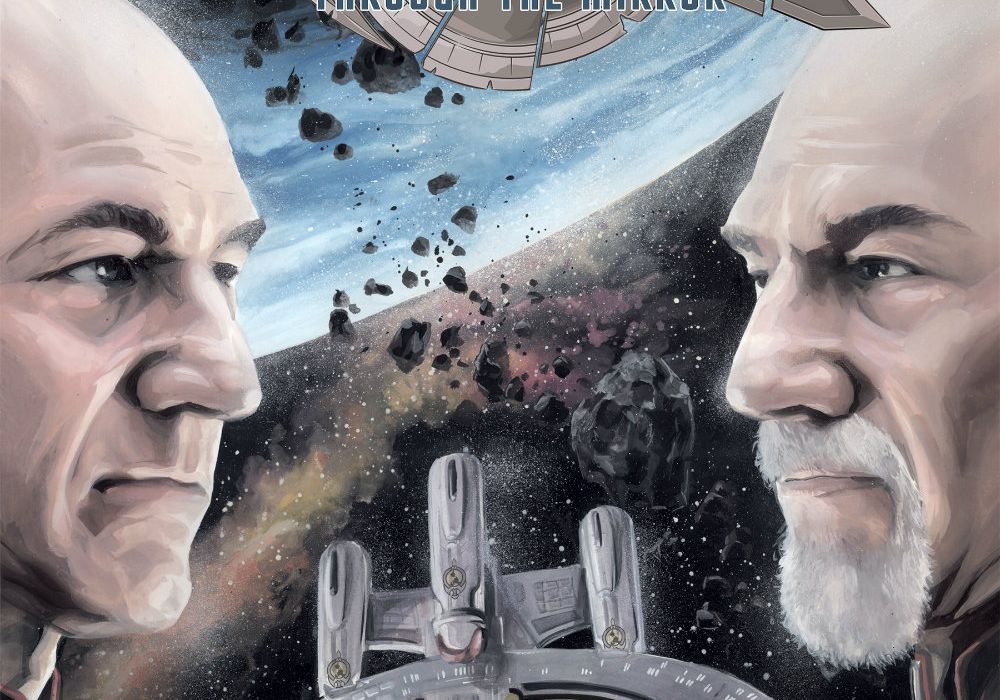 Star Trek introduced the evil Mirror Universe back in 1968’s “Mirror, Mirror.” Now the Mirror Universe is back, thanks to the IDW “Star Trek” comics, and after being introduced to it in “Mirror Broken,” the evil alternate Enterprise crew is stepping into the world of The Next Generation. How does it go? Read on and find out. 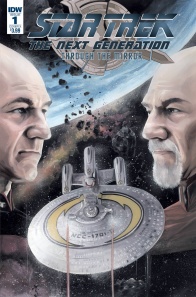 Because you demanded it! Following up the smash-hit miniseries MIRROR BROKEN, the Mirror Universe Next Generation crew is looking for new worlds to conquer, and they’re crossing over to the Prime Star Trek Universe to find them! Also in each issue: Just how did the Mirror Universe crew find their way to ours, and what does Emperor Spock have to do with it? Backup stories every issue illustrated by MIRROR BROKEN co-creator J.K. Woodward!

The very idea of a Mirror Universe where morality is switched and all the good characters we know are evil is an amusing one, and really owes its popularity to the original Star Trek. We got to meet the mirror version of the Next Generation crew in “Mirror Broken,” and their adventures to steal the Enterprise made for an amusing mini-series, but there’s nothing quite like seeing characters face off against their evil selves.

However, we don’t get that quite yet. As this is the first issue, it serves as a setup for the encounters to come. Fortunately, it does so in a manner that’s well-paced, builds up the story, and progresses nicely.

From the very first page, we know that this is a comic steeped in the history of both the show and previous IDW “Star Trek” comics. If the Starfleet Mining Facility of Naia VII looks familiar to readers, it’s because it was an important location in the “Star Trek/Doctor Who” crossover comic, tying it into previous comic events. It quickly moves on, introducing plot points and building the story from there as Worf begins to uncover the plot.

Let me just mention that the clue that triggers Worf’s discovery of the evil alternate Enterprise crew is fantastic. It’s long since been codified into pop culture that the surest sign of an evil alternate counterpart is a goatee, and while its status as a “beard of evil” has a long history, it was the original Star Trek series that introduced the idea of evil dopplegangers having goatees with Mirror Spock.

So sure enough, Worf first notices something strange when he sees a crew member of the Enterprise not only far from the ship, but with a brand new goatee.

From there, the plot briskly moves ahead, as characters get into action. The pace isn’t so fast as to feel rushed, but it doesn’t waste time either; each decision advances the story, moving ahead without missing a beat. David and Scott Tipton do a fine job building the story and introducing each moment and revelation, making every advancement a natural-feeling step forward.

Marcus To’s illustrations can be a little inconsistent, but are overall high quality. While occasionally the character details can feel a little jagged, that is the exception to the rule, and we often get some fine images of each character in good detail.

The artwork also does a fine job with the various alien species that inhabit the “Star Trek” world. Crowd shots will often include characters with green or pink skin, or the occasional pointed Vulcan ears, but Marcus’s work on Worf is particularly noteworthy, given the details put into each ridge on his head, the sharpness of his eyebrows, and the body language he shows throughout the comic. Of course, the human characters get distinctive designs too; I’m particularly fond of Lieutenant Amato and her oversized glasses.

The color work from Brittany Peer also serves the comic well. The wonderful use of shades of blue in the establishing panels is pleasing to the eye, and the shading she gives the sets and characters gives the comic an almost watercolor-like look to it.

However, it’s when the action starts that the artwork in “Through The Mirror” really shines. The shading from the dark room gets illuminated by the red phaser beams, casting shadows and glows in an effectively dramatic manner. The motions are fluid from panel to panel, making the scene dynamic and easy to follow.

As with the main issue, this is mostly an introduction, but we get some good character work and world-building. We see Mirror Picard’s crew in action as they casually interrogate a captive, and learn valuable information about the former Emperor Spock. The conversations alone help bring us more into this dark universe, especially when we get Picard’s famous “make it so” line used to approve cold-blooded torture.

J.K. Woodward’s artwork in the backup issue matches that of his “Mirror Broken” run and is fantastic. The detailing, shading, and portrait-like style about each scene. It’s all fittingly dark, but that’s not only effective for a Mirror Universe, but it creates a nice thematic contrast with the lighter and more calming Prime Universe.

Overall, if you like the idea of the Mirror Universe and want to see more of it in regards to the setting of Star Trek: The Next Generation, you’ll enjoy “Through the Mirror.” Any comic featuring an evil Captain Picard is one that any Star Trek fan will like.

Final Verdict: 7.9 – A good start to the story arc. Well-paced, nice illustrations and color work, and provides a good setup for the story to come.