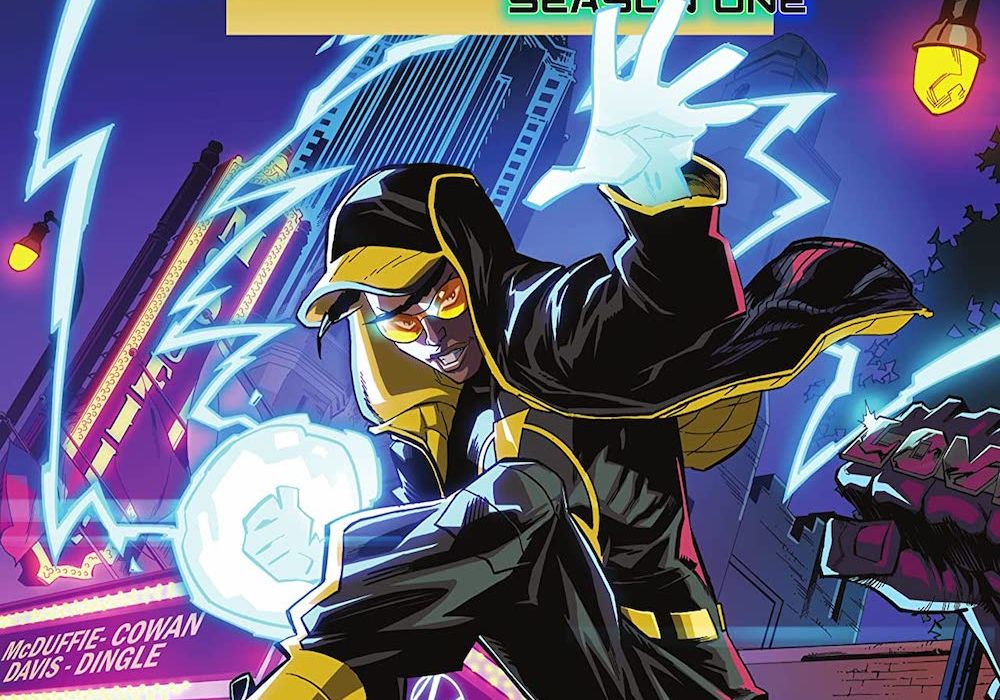 It is impossible to talk about “Static: Season One” without acknowledging the history of Milestone Comics and complicated and protracted path back to publishing. The status as a Milestone book both helps and hurts this issue, as it gets a little more good will thrown its way, but also is held to a higher standard than maybe a first issue should. If nothing else, this issue signals the return of something important and, hopefully, the start of a worthy follow up to one of the most important imprints of all time. 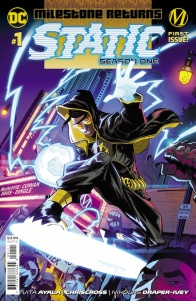 At long last, the most famous face of the Milestone Universe is making his shocking return!
Bullied nerd Virgil Hawkins wasn’t the kind of kid you’d normally find on the streets at a protest– but like everyone else in the city of Dakota, he was fed up. Unfortunately, the first time he stood up to raise his voice, the world turned upside down. The experimental tear gas released that day left some of his classmates maimed or dead…but it left Virgil, and others, with stunning new abilities. Virgil has power inside him now — real power, the ability to channel and manipulate electromagnetic fields.
But there’s anger burning inside him, too.
What is he supposed to do about all of this? And first and foremost — what is he supposed to do about his bullies, now that they’ve got superpowers too?
A dynamic creative team of new comics voices and Milestone Media veterans join forces to open up a new chapter in the story of the most iconic Black teen superhero in comics history.

Of all of the Milestone characters, Static is the one most folks are familiar with, due to both his animated series and his (brief) integration into the main DCU before and during the New 52. Vita Ayala and ChrisCross don’t go into this series presuming you’re a Static expert, but the combination of the name recognition and the relatively simple power set means that they don’t need to spend too much time introducing the core concept of his powers. The presence of the ‘big bang’ in this issue, as well as in the “Milestone Returns” one-shot, makes it really easy for readers to gain the basic familiarity with the characters and jump right into a new story.

ChrisCross is an artist who was doing a ton of work for DC in the aughts, and who hasn’t been as prolific since. His style has a definite manga influence, and it is a refreshing approach to this character and this universe. The issue with the visuals here is that the playfulness of ChrisCross’s pencils are somewhat undercut by Nikolas Draper-Ivey’s inks and colors. For a story that should seem lighter, this story gets dragged down by the color palette early on in the story. It’s very muted and subdued, which usually isn’t a problem, but mixed with ChrisCross’s art, it just doesn’t click as it should. When it does pop is when Hotstreak shows up and we see the two newly powered teens fight each other. At that point, Draper-Ivey’s colors enhance the battle, using whites and blues for Static and reds for Hotstreak, and looking every bit as epic and Shonen manga-ish as the pencils suggest.

Virgil Hawkins, the titular Static, gets most of the issue dedicated to him, and we see a lot of his insecurities, fears, and doubts played out through his narration. While this establishes the character as thoughtful and layered, it seems like a missed opportunity for Ayala to add a little more fun or playfulness with the character. It isn’t like teenage characters can’t be deep, but there’s something about Virgil that seems so weighed down. Now, this may be just because he has these new powers and is struggling to find his place in the world with them, but everything that Virgil talks about in this issue is viewed through the lens of stress. He’s stressed that he’s going to get in trouble for the events of “Milestone Returns” at school. He’s stressed about his crush. He’s stressed about his powers.

The character would be a lot more enjoyable to read if there was a balance between the stress and the joy. We’ve seen dozens of images in comics and on the screen of young characters reveling in their new powers. Spider-Man is probably the best example of this, with Tobey Maguire yelling “yahoo!” as he’s swinging around the streets. Now, I’m not advocating for Virgil to be a Peter Parker clone, but part of the reason that young characters are so much fun is that they can the opportunity and excuse to be brash and careless and enjoy their powers. Virgil doesn’t seem to be enjoying his life at all right now. Even when he’s playing a video game, he’s not smiling. We don’t see Virgil smile at all in this issue, and while I understand the tone that Ayala and ChrisCross are going for, it seems a little too dour.

There’s every chance that this initial arc will move Virgil into a place of greater peace for his life. Or, perhaps Ayala’s vision for the character is that of a kid who doesn’t enjoy his powers. Those are viable options for the series, but from this first issue, it just appears that Virgil is glum, and that doesn’t make for a super compelling character. But there is enough good stuff in here, specifically how lived in and nuanced the supporting cast is, that this is an easy book to recommend. Hopefully, the overarching vision for the title will reveal itself sooner than later, because the world needs Milestone Comics, and needs them to be good.