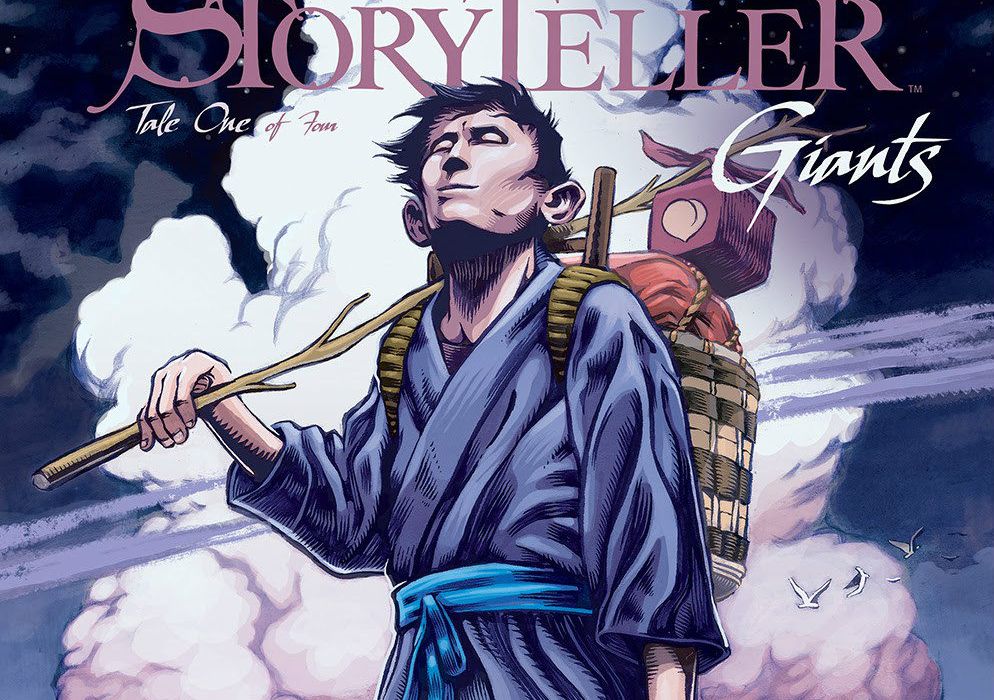 I’ve always loved hearing the folktales and mythology from various cultures (in fact, I’m hoping to one day publish a collection of parodies of them that I’ve been working on for some time, but that’s neither here nor there), and seeing how people interpret them differently. Tie it in to the late great Jim Henson and you know I’ll be interested. 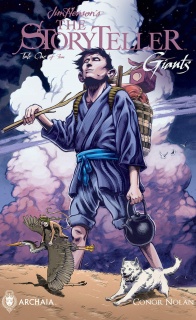 Written and illustrated by Conor Nolan

Jim Henson’s The StoryTeller: Giants is a collection of mythic tales of when giants roamed the Earth, inspired by folklore from around the world and told in the spirit of Jim Henson’s beloved television series.

In the first issue, rising newcomer Conor Nolan reimagines “The Peach’s Son,” a Japanese tale of a giant who was raised by humans but never accepted by them.

When a nearby village is overrun with evil beings, the giant will take a chance to be a hero and prove himself to be part of the community he calls home.

Upcoming issues will include stories by Brandon Dayton, Jared Cullum and Feifei Ruan.

The comic is, in fact, an adaptation, and by that I mean it’s more than just an adaptation of a folktale. Jim Henson’s The StoryTeller was a TV show from back in the 80’s, starring John Hurt as the titular storyteller, with Brian Henson voicing his talking dog. I never saw it myself, but as the story mostly exists to retell classic tales, so there’s not exactly much in the way of continuity to worry about.

Still, there is the artwork to consider, at least when it comes to the StoryTeller and his dog. Given the exaggerated features and wild hair John Hurt had in his role, it’s easy enough to properly adapt that to comic form. Yet there are still some features to the character (mainly in the eyebrows) that make me go “Yep, that’s John Hurt.” The dog, meanwhile, looks less like a puppet from the Henson Creature Shop and more like a regular dog, albeit one that can talk – considering that’s what he’s supposed to be anyways, it works quite well.

Without reading the comic, the title could make it seem like the StoryTeller is in fact a giant, but that wouldn’t be right. The StoryTeller is a regular-sized human being, but the stories he’s telling this time around are about giants. Of course, there have been plenty of other “The StoryTeller” comics, so it’s par for the course.

Mythology is filled with giants of all types (and a surprising amount of giants are beaten by people named Jack, for whatever reason) so there are plenty to choose from. However, that makes the choice for the first story all the more curious.

While the tale is titled “The Peach’s Son,” anyone familiar with Japanese folklore will immediately identify it as the tale of Momotaro – a young boy born from a peach, who went to fight a band of oni (demons/ogres) and met up with a talking dog, monkey, and pheasant along the way. There are several variants of the story – some versions change up the peaches, or the animals that join him, while others change his personality around one way or another.

Yet I have never before seen a variant where Momotaro was a giant. Some versions describe him as tall and strong, but this is the first version I’ve seen where he’s literally a giant, and goes to defeat the ogres because the villagers fear him and were about to turn into an angry mob.

It’s not that there’s anything wrong with changing up folktales, I’m just curious as to why they decided to start by turning the hero into a giant instead of with a tale that already features giants.

Still, it works the giant subplot in nicely, using it as a means to motivate the protagonist (who’s never actually referred to as “Momotaro”) to go off on his journey.

When the story really gets started, the dialogue takes a shift to be more like a classical fairy tale, in the way characters monologue and wax poetically about their goals and situation. However, it also uses a nice little device where the narrator (the titular StoryTeller) appears in the occasional crowd shot to continue his narration, including an amusing moment where another character looks at him in confusion as he addresses the audience.

The artwork throughout the issue is quite nice, capturing a style befitting of tone and tale. There’s some. The spacing and pacing carry the story well, and everything receives the same amount of love and focus.

There are some wonderful establishing shots, like the scene overlooking the ogre campground; the ogre flag waving over the campsite, the wrecked villagers’ houses to the side, and the drunk ogre collapsed in the middle of the path set the scene nicely. When we see the ogre king, it’s an excellent design, with heavy armor, a lengthy beard, and flies buzzing around his head.

The peach boy himself is rather simplistic in design; simple robes, short black hair, and rather large ears (aside from being a giant, of course). But as the main character, it’s actually okay to look rather basic; not only does it reflect his humble upbringing, but it makes it easier for the readers to see themselves in him. His animal companions are rather more distinctive, and all manage to display their personality even as animals.

The StoryTeller and his dog provide a framing device, concluding the story nicely. It’s a rather comforting scene, an old man and his dog by the fire, and warms one’s heart on this cold winter day. The story is self-contained, so it’s easy to enjoy the issue on its own, but those who enjoy learning different tales and myths may very well want to keep following it.