I feel like I missed something. Was there a “Sandman Universe”-esque one-shot setting this universe up? Who are these people? Where am I?! Did I accidentally pick up a Mission Impossible comic? Why are we on a train heading towards spoilers?! 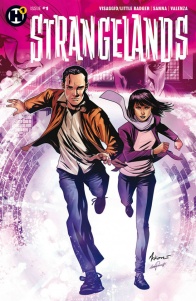 Two strangers find themselves inextricably tied together by inexplicable superpowers. Fighting their connection could mean destroying the world.

Opposites attract? Elakshi and Adam Land aren’t married. In fact, a month ago, they were perfect strangers, dwelling in lands foreign to one another. But now, they’re forced to remain by one another’s side, for their separation could mean the planet’s demise. Their greatest challenge is to stay together — even if they have to tear the world apart to do so.

I appreciate a good cold opening as much as the next person. The practice allows a piece of art to set the tone and lead into an intro or to tell a short, standalone adventure with some thematic relevance to the rest of the unit of story (episode, chapter, issues, etc.) Two TV shows I adore, Macgyver and Batman: The Brave and the Bold did this to great effect. What’s this gotta do with “Strangelands?”

Well, for one, despite the recap that recaps events we’ve never seen before in any of the H-1 books, including the FCBD one, the in-media-res start to issue #1 is highly reminiscent of these types of openings. We join our two leads as they’re running from a beefy, gun toting motorcyclist dude, remaining on a non-stop action train with them for a good few pages before pivoting away from this to their next mission aka the contents of the rest of the issue.

The only problem with this is that all we have is part of the story but the comic thinks we know it all already. It’s this tension that starts “Strangelands” #1 off on the wrong foot. Why are they on the run? Who are they on the run from? How’d they get these powers? These are questions that shouldn’t matter, in that the lack of an answer is purposeful as the spy-adventure is more important at the moment than the fiddly backstory elements, and will most likely be revealed later in some way, shape, or form.

But, and this is the ironic part, the recap, by putting attention on the fact that there is a substantial set-up for how Elkashi and Adam got to where they are, makes it all the more noticeable that the comic itself chooses not to set any of it up in its page count. Combine that with dialog that is highly expository but not nearly informative enough and you have a recipe for confusion. It sucks all the mystery and wonder of a true cold open out without establishing enough to get us to care about these characters, leaving the story to stumble into its first mission.

Once there, however, the story markedly improves as we learn more about Elkashi and Adam as well as this strange cult/self-help resort they’ve found themselves in. There are more than enough ideas at play to keep you guessing and interested, such as these two being unable to be more than a couple hundred meters apart from each other. It’s a constraint on the narrative that allows Visaggio and Little Badger to explore this forced partnership and the effect it has on our two leads while also providing constant stakes and interesting ways of problem solving. There is one scene in particular that sums up the strengths of the creative team. It’s a five panel page, wide-screen format.

Adam finds someone punching the ground, shattering their hands, before we cut back to Win finishing his speech about how giving up their traumas, whatever that may mean, is the way to save the world. It’s an eerie page that Sanna and Velenza absolutely nail visually. The facial expression on the person with the busted hands, their eyes ringed by scratchy inks, and lit by the moonlight, bones and blood colored dark and foreboding, A Larger World Studio’s lettering taking on a more spear-like appearance with sound effects that look as they would feel to be heard.

At other parts in the comic, Sanna’s faces leave a lot to be desired, though. They run the gamut from barely there, even in mid-shots, to well defined and quite expressive. Sometimes the simplified faces work to the advantage of the action or the scenery but most of the time it detracts from the emotions of the scene, leaving the words to float in the air and lose some of their impact. But then there will be a scene of Adam using his powers and the quiet serenity of it, and the ethereal purple coloring of the powers, will make you forget.

So, what then is there to make out of “Strangelands” #1? It is certainly not a strong start to the second H1 imprint title, much to my disappointment, but it isn’t a total wash. The underlying ideas are solid, the constraints on the narrative feel fresh, the mystery of who Kittyhawk is and what they want is tantalizing, and the concept sounds like it will be more fun/engaging once we have a couple adventures under our belt.

Should this issue have been a one-and-done, compressed story? 100% but maybe this will be a two-parter, which would work just as well. The genre at play really benefits from, at least at the start, the episodic nature of globetrotting missions. But, what’s done is done, and it does no good to speculate on what could have been, only to wonder what they will do next.

Oh, and that two-page back-up is absolutely stellar.