When everything is upside down, “Stranger Things” #2 doesn’t let readers go without understanding. 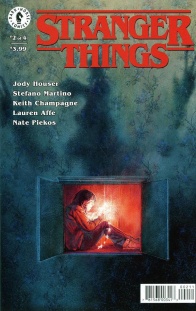 Stuck in the mysterious Upside Down, Will Byers is cold, scared and starving. He uses his last bullet to temporarily drive away the Demogorgon. Drawing on lessons learned from D&D, Will hunts for food and supplies to prepare for whatever lies ahead. After discovering he can affect the lights in his family home, brief excitement turns to terror when he realizes he isn’t the only one that wants to break through to the other side.

The Stranger Things TV series may not be for everyone, but enough is common knowledge about it that a comic could be easily accessible. Even with the challenge of appealing to those who are fans of the source material Jody Houser is more than capable of creating a story that appeals to and is understandable to both groups.

Utilizing a period of time in the TV series that has a heightened sense of the supernatural, even by the bounds of what else is going on in the show’s first season, Houser gives just enough information to provide newcomers with an understanding of the Upside Down, an alternate, hellish, mostly underpopulated dimension that looks extremely similar to Hawkins, Indiana. This underpopulated area, along with knowledge of the general time frame, allows for a relatively streamlined experience when it comes to explaining what needs explaining for newcomers. All that Houser needs to explain is already mostly self-evident. The manner by which Will can communicate with his mother, the disturbing nature of his enemy, the replicated image of Hawkins in the Upside Down, and more are so clearly shown, so obvious, that readers do not even need any narration to explain them. Appropriately, none of the narration does do so anyway, trusting readers to understand what is going on at least as much as Will does.

Given the low population of the area in which the story takes place, Houser has less that she has to work with for “Stranger Things” #2, with the cast consisting of the Demogorgon (to use the [inaccurate] terminology of Will Byers and his friends) of 1983, comic protagonist Will Byers, and… not much else that is alive. As such, a lot of the supernatural elements presented, in particular the Demogorgon monster itself, can have a presence in the story even through their absence, a looming shadow over the entire town that worries Will even as he is completely alone. In fact, the absence of the Demogorgon at times is akin to the Xenomorph in the Alien franchise, ostensibly providing a breather for the protagonist, but really just presenting a threat that could appear at any time to make things infinitely worse.

One of the more interesting elements in the narration Houser presents is the reality of Will’s situation that he himself may not consider. For example, Houser goes into detail about the benefits of bravery in the short-term, but also the pitfalls that it may cause in the long term, such as using far too much ammunition to scare off or temporarily destroy the Demogorgon to the point of rendering a rifle useless, implicitly saying that caution may be better than bravery at times.

Combining the treatment of bravery with the treatment of the Demogorgon, alongside a judicious use of flashbacks, Houser shows Will Byers’s heroism and willingness to sacrifice himself to save others, in spite of his young age and near complete disadvantage against the creature he faces. The flashbacks also show his thought process as a game master in a Dungeons & Dragons game, and the idea that sometimes people need to do anything in their power to protect others, especially if they are the only people who can actually help.

Stefano Martino provides a soft pencil, giving intricacies to faces like a shadow under the chin or in the space between the nose and the lips, adding a depth to said faces that many other artists may overlook. This added depth both emphasizes light sources and provides an added realism to the faces seen, thereby making the Demogorgon’s alien, borderline floral appearance all the more disturbing.

Martino gives a variety of perspectives. Wide areas of the Upside Down are given intricate detail, with objects ranging from the normal (an empty swimming pool) to the disturbing (the vines and refuse around and inside of said pool) in equal measure, rather than allowing one or the other to blend into the surroundings. Similarly, the high detail gives added focus to silhouetted forms like Will at times, allowing the background to take the show while the writing is more important than how Will actually looks. This focus on intricate, firm details allows the lights in the area, coming from the other, more “normal” dimension, to be presented as blurs, giving an outright appearance of not fitting in.

Lauren Affe provides a dark, dim color palette to the Upside Down, much like the television series. The muted look of everything else in the dimension makes Will’s dark brown hair and bright orange jacket stick out all the more, fitting in much better with the brighter colors of the flashbacks to the other dimension for the humans, and giving him the overall impression of really not fitting to this otherworldly environment.

The aforementioned brighter colors are most prominent not only in the flashbacks, but in the scene of Will realizing how to communicate with his mother, the bright lights giving a sense of hope that is all but absent in his time in the Upside Down. In a kind of corny way, the idea of Christmas itself and Christmas-style string lights gives the idea that the spirit of Christmas itself is giving him hope. Usually, this reference would be groan-worthy, but Affe makes it work.

Final Verdict: 8.0– “Stranger Things” #2 is a creepy ride, but doesn’t leave those who don’t watch the show of Stranger Things behind.