Within the realm of movie or TV series adaptations, “Stranger Things – Into the Fire” falls into some of its inherent trappings. While trying to present something new, but still cater to fans of the Netflix series, this debut issue does not excel on either. 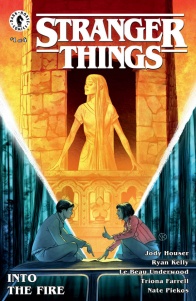 Years after escaping Hawkins Lab, two of Dr. Brenner’s former subjects seek to live normal lives. When news reaches them that the lab was shut down, they go on a harrowing search for Nine, a powerful pyrokinetic whose shattered psyche threatens to burn them all to ashes if they can’t find her and free her from her own malevolent imagination. A pyrokinetic Hawkins Lab subject! See the true effects of Dr. Brenner’s meddling experiments.

Before going any further, full spoiler alert for seasons 1 and 2 of Stranger Things . Finding its space between the first seasons of the hit Neflix series, “Stranger Things – Into the Fire” tells the story of two escapees from the Hawkins laboratory, and how they are forced into an adventure given the apparent destruction of their previous prison on the end of season 1. That plot and script choice is very deliberate, as this series wants to explore the sense of family and community of a particular type and group of characters. It is, however, also a continuity trap, as several outcomes are automatically discarded by fans of the show, while some concepts are not fully introduced, leaving the eventual occasional reader a bit in the dark as to the relevance of certain events.

Talking about the art first, “Stranger Things – Into the Fire” is a combination of three artists on pencils, inks, and colors, respectively. Nowadays it is becoming rarer to find books that split the duties of pencils and inks, with only the most adapted duos still working on such a way. But does it work here?

For the most part, Kelly does a strong effort on pencils, page and panel layout, if not groundbreaking. His pages lean more on the heavy side of panelling, but they do so with a good sense of fluidity and guides to eye movement, so they don’t actually appear as cluttered, or as an impediment to following the story. This debut issue requires a lot of introspective moments and character-on-character interaction and dialogue, with very little in terms of action. Because of that, Kelly’s ability to make every individual unique, from body to facial type, is laudable, particularly to the two protagonists.

One particular sequence and setting, taking place on a time and location removed from the main storyline, allows him to flex more of his creative muscles, and his inventiveness to some of the costume design, as well as some downright cartoony elements to denote an out-of-reality touch, are quite good.

Underwood on inks reinforces those elements. One can notice a strong support on background settings, from how aged an old barn looks from the extra number of lines running across them, or even how some of the facial traits on characters are made heavier, showing more stern, preoccupied faces.

Farrell on colors seem content on staying with a relatively mundane palette, which, for one, is aligned with the more urban and commonplace locales of this first issue of “Stranger Things – Into the Fire.” It does lack a bit of flash, despite having little opportunities to inflict that impact. It is very consistent and well made, just lacking a more remarkable quality.

Back to Houser’s script, it is less on execution, but planning, that is suffers. The writer seems to be writing the plot into a corner by focusing on this particular time period, and by choosing a particular group of characters that is far from the more beloved aspects of the Netflix show. If by design of the series or the plot itself remains an unanswered question, but the fact is that this first issue is neither reader friendly to those unfamiliar with the source material, and not particularly exciting to old-time fans.

Regardless of that, Houser still manages to tell an interesting story. The tropes of abandoned and traumatised individuals, finding solace in one another and on a larger community, is certainly written very well, from how they react to events around them, to how their dialogue bounce off each other. The final reveals of this issue, which shall remain unspoiled on this review, will have a bigger impact on the fans of the TV show, but it is still compelling enough for those on the outside for a second chance on the following issue.

Part covering a blind spot on the TV show, part crafting something new, “Stranger Things – Into the Fire” is surely a capable offering, with consistent art and very good dialogue by Houser. And if the plot on this first entry is nothing to clamor about, it does open enough doors for more interesting chapters coming later on.

Final Verdict: 7.0 – “Stranger Things – Into the Fire” is a well-made effort on telling a new story on this universe, just one that is still to light the billboards on fire with its premise.