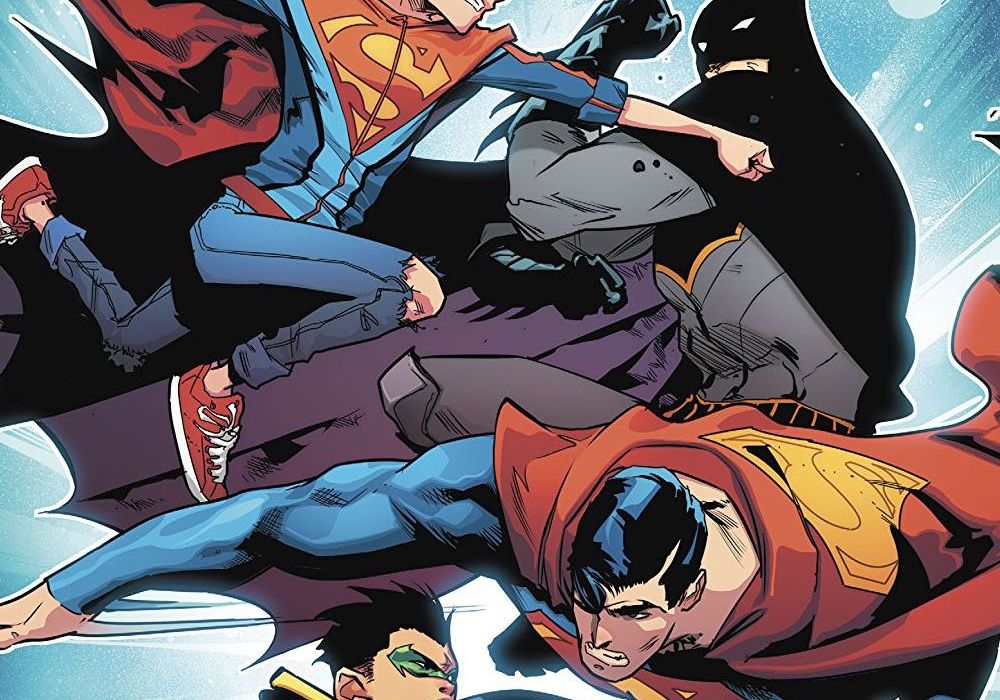 Utilizing earlier stories, “Super Sons” manages to create a compelling supervillain origin and modus operandi while keeping the focus on its young heroes. 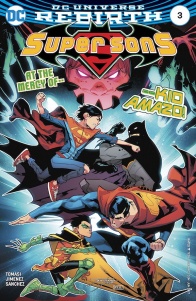 “When I Grow Up” part three! It’s Super-Son vs Bat-Son as the exciting new series continues! Kid Amazo is ready to rip the hearts out of the world’s not-so-finest super duo. Face to face with their newest—and first—villain, Jonathan and Damian strike out the only way they know how…at each other!

As far as story goes, Peter J. Tomasi paints a portrait of a super-family very well in the small amount of time they are given, showcasing his antagonist in a way that is both familiar and unique. Kid Amazo and his interactions with the eponymous Super Sons create a very disturbing narrative in spite of the ages of all involved.

The banter and arguments between Jon Kent/Superboy and Damian Wayne/Robin continue to be very amusing, as Tomasi balances Robin’s borderline sociopathic manipulations and insults against Superboy’s naïveté and compassion. The storytelling truly feel like a younger version of their fathers’ dynamic, and makes me hope that this team stays together for a long time. Elements of the dynamic even seem to mimic Miguel and Tulio of The Road to El Dorado, which helps to endear them even further for fans of that film.

Kid Amazo’s family creates an interesting parallel to the Superman Family and the Batman Family, in that it shows what happens when such a unit falls apart due to the immaturity of one of their crueler members. In all, their situation seems to mix the “I work alone” mentality of Batman with the high levels of power exhibited by Superman, but with both of those characteristics pushed up to their limit without an ounce of compassion to hold it back. This type of storytelling makes for a villain who will hopefully survive the story arc to menace the duo in the future, as Kid Amazo seems to represent the worst of what they could become if they do not work together, and is also an overall threatening and disturbing villain in his own right. On the other hand, his sister Sara seems to be someone who, though intriguing, is unlikely to be a long-standing supporting character in the series. However, she would be welcome if this prediction proves incorrect.

The incorporation of the Amazo Virus, from the 2014-2015 arc of the same name from “Justice League,” is both welcome and interesting, as it gives a possible biological reasoning behind the powers given, rather than mystical or other forms of superhuman abilities.

One element that seems very bizarre is the fact that the Amazo robots in this arc, ‘When I Grow Up,’ is that Batman and Robin seem to be treated as people whose powers are worth replicating… despite the fact that they have no powers to speak of. Would the drones replicate their gadgetry? Is their puppeteer simply clueless about the nature of Robin’s abilities? The result remains unclear, but neither Robin nor Superboy bring up the discrepancy, nor do they even make reference to the fact that there may be a problem.

Jorge Jimenez’s artistry shifts between “cute and funny” and “extremely dark and creepy” depending upon the scene. Superboy’s inexperience and youth is emphasized with softer features, while the controlling nature of Robin is given focus through sharper features such as his hairstyle, ears, and even his domino mask. This difference is played up particularly well in a humorous scene wherein the disastrous duo escape a problem with the thirteen-year-old Robin riding on the ten-year-old Superboy’s shoulders while keeping a completely straight face.

Jimenez gives Sara intense weight, with her tearing eyes as she cries, or her determined expression as she makes use of her powers, to make readers feel for her, even though she was only fully introduced in this very issue. On the other hand, her brother Reggie, Kid Amazo himself, is shown in varying degrees of menace. Even as a superhero, he is given a smug expression on his face that clashes with the happier ones of his mother, father, and sister. As Kid Amazo, he further increased his arrogance to truly terrifying degrees, as Jimenez makes the Amazo robots into beings akin to a later-series Terminator in how they seem to melt as they form into new bodies, or duplicate themselves to create said forms en masse.

Alejandro Sanchez’s coloring does what Jimenez’s art sometimes could not do on its own, further enhancing tone depending on the scene. The warm colors used for characters like Sara are turned into a blazing inferno as things take their turn for the worse, complete with certain characters’ glowing eyes and an entire background that seems bathed in flame.

Rob Leigh’s work with lettering does a very good job of distinguishing Kid Amazo’s words from those of others, highlighted with red text rather than the usual black. In this way, even Leigh manages to add to the pseudo-demonic presence of such a dangerous supervillain who does not even need to be physically present to fight.

In all, this issue provides a good look into an antagonist who does not even need to be physically present for most of his revelations, while still keeping the focus primarily on the young heroes of the tale.