With “Supergirl” #10, Steve Orlando, Brian Ching, and Michael Atiyeh bring together an interesting tale of escape while also delving into technologies of the Phantom Zone. 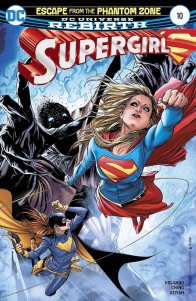 “ESCAPE FROM THE PHANTOM ZONE” part two! The Phantom King holds all the cards, and he’s forcing Supergirl and Batgirl to turn to the alien antagonist in order to save themselves and the humans trapped inside the Phantom Zone.

As is common of Steve Orlando’s take on “Supergirl,” this issue in ‘Escape from the Phantom Zone’ is rather fun, focused on helping people over defeating enemies. Although not everyone gets time to really shine, enough do to make the overall effect rather fast-paced and interesting.

As Supergirl herself is restricted in her powers by virtue of being trapped in the Phantom Zone, she and her friends make use of quick thinking, trickery, and the occasional dumb luck to survive. While the “prison break” plot seems passé nowadays, Orlando manages to make it work and even seem pretty fun through the use of intelligent heroines and Ben Rubel, a more relatable non-superhero human who is as scared as the average person would likely be in his completely unnatural situation.

Xa-Du, the Phantom King himself, is presented as an unusual figure for Kryptonians. While he does not have access to the full breadth of the power granted by a yellow sun, his use of Phantom Zone-based ethereal technology helps him to remain formidable and develop into a bizarre merger between a science-based supervillain and what many would view as a “standard” evil Kryptonian. In an issue revolving around an escape attempt and saving people, Xa-Du and his henchmen serve as a palpable threat, their heinous crimes keeping them serious.

In spite of the evil shown, there are moments of outright wacky storytelling, such as unexpected uses of psychic abilities and some expertly hidden gadgetry in ridiculous ways. On the whole, the general effect seems to be similar to the television show Danny Phantom, mixing super science with superpowers in alternate dimensions to tell odd and at times silly story beats. Through elements such as these, Orlando manages to keep a steady stream of dropped jaws and laughs alongside the dangerous situation in which the protagonists find themselves.

Brian Ching’s artwork seems as cartoonish as ever, which works to the favor of the issue itself. With the rounded, soft character designs, Ching manages to supplement the dangerous, but not oppressive, nature of the issue itself. His ability to portray Batgirl, Supergirl, and Ben as the teenagers they are, focusing in on their youth rather than any overarching physical appeal to their bodies as other artists might, allows the story to take its more teen-friendly focus in stride. At the same time, his artwork also emphasizes the dissonance between the abominable acts of murder performed by Xa-Du in the name of science and revenge, as the soft pencils do not give enhanced definition of him nor his henchmen, allowing them to both fit well into the story and make their villainy all the more jarring and impactful in the rare moment when the action is more defined in the Phantom King’s most vile act of the issue.

Ching’s use of light and shadow is rather intriguing. Throughout this issue of “Supergirl,” light seems to be associated with Xa-Du, with everything from the flames of a molten execution chamber to his proverbial “throne room.” On the other hand, darkness and dreary areas seem to be the shading of the month for the side of heroism. Though this discrepancy may seem odd on the surface, it is especially telling of the groups’ respective situations. All seems lost for a time to the heroes, with Xa-Du feeling he could potentially truly win and get some petty vengeance over Jor-El, so he would be feeling “lighter” as opposed to the darker moods of the temporarily depowered Supergirl and her non-powered allies. At a turning point, the light and dark coexist, with a bright character being in the depths of the Phantom Zone, showing how things have a potential for great change.

Michael Atiyeh’s colors paint a mixture of the dour nature of the Phantom Zone and the more colorful outfits of those who have only been recently trapped in the penal dimension. His dark scenery is overlain with smoke, befitting a “phantom” location, giving the entirety of Xa-Du’s “Aethyropolis” a similar impression to a graveyard despite being a fortress of some sort.

Without needing a single word, Atiyeh manages to paint an impression of what life in the Phantom Zone does to a person. Those who have been there longer have more muted, darker colors, with exception of Xa-Du himself due to his experimentation. By contrast, those who have only recently come to the Zone have their normal bright, vibrant colorations, showing just how much they don’t fit in with the general populace.

Final Verdict: 8.0 – A fun issue with talk of the mechanics of the Phantom Zone, along with ample use of the abilities of all involved.