With the relaunch of “Action Comics” and “Superman” by Bendis and team, the continuing series of “Supergirl” was also up for an overhaul, as Kara’s story gets more intertwined with Krypton’s mythology and destruction. And within that context, the new creative team of Marc Andreyko and Kevin Maguire elevates the series to a new level of quality and excitement 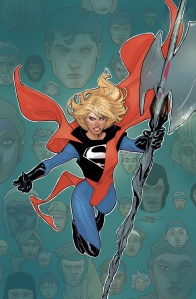 Mourning the loss of the Kryptonians wiped out by Rogol Zaar, Supergirl decides to play detective and sets off into deep space to learn more about the would-be usurper. Using whatever tech she can scrounge, Supergirl builds a star cruiser, and after intel from Green Lantern, she blasts off into the cosmos with Rogol Zaar’s deadly axe to solve the mystery-along with a traveling companion you won’t believe!

Trauma. Loss. Grief. Not the usual words one would use to describe a comic book centered around Kara Zor-El, despite her tragic backstory. Perhaps even more surprising, these themes, which could be the basis for a depressive issue, on the able hands of this creative team becomes fuel to an active and engaging mission statement. Yes, “Supergirl” is set to be a series discussing complex emotions, but if the first issue on this new run is any indication, it will do so by observing how the title’s protagonist choses to act upon it, rather than to fall in a quagmire of inaction.

For a book that relies so heavily on feelings and emotion, it is hard to imagine a better artist than Kevin Maguire. To write about the artist’s ability to draw facial expression is as groundbreaking as arguing how wet water is, but still… can Maguire draw facial expressions! What is most mesmerizing is not how consistently he can do that, but rather how quickly and with few panels he can change perspectives. In one particular sequence towards the middle of “Supergirl” #21, McGuire shows a conversation between Kara and her small cousin, as he almost convinces her to abandon her revenge-seeking plans. In just five panels, readers can experience a range of emotions and a secret peek into Supergirl’s mind, as she goes from stubbornness, to internal arguing to crystalizing her decision. It truly speaks of the artist’s craft to so effectively portray that evolution, using so little in terms of resources.

The art doesn’t slow down when it comes to wider shots either. There are two particular settings where this can be observed more clearly; one in Metropolis, the other in Smallville. On the first one, the camera zooms outwards to show the busy city’s skyline, as Kara leaves the company of a dense population to the more solitary mission ahead of her. The second, and more beautiful, in Kansas is as bucolic as a Rockwell painting: Kara sitting on top of a pile of hay, Superman floating behind her, the wide open horizon between them. It is one of those images that precipitate other senses to kick in, as readers fill in the likely sounds of that would be present in such a setting. Plascencia’s colors are very much aligned with the general feel of the art: while certainly not cartoony or cell-shaded, his palette certainly leans towards the more dynamic and cheerful, almost like a representation that, regardless of the recent tragic events, Supergirl remains a positive influence.

Andreyko delivers a very effective script to lay the groundwork for this new run for “Supergirl.” Mission statement is quickly established, main characters are firmly defined and some surprises and guest-stars are added for fun, but not detracting from the story’s consistency. One aspect that deserves special praise is how respectful the writer is to these characters, especially on how Kara and Kal react to one another. Their relationship as cousins with shifting ages is played to its strengths, as both Supergirl and Superman take turns being “the older sibling,” providing advice and motivation when needed.

The overall plot – Supergirl in search for answers and revenge for what happened to Krypton – is not something groundbreaking, but it does show promise if handled well in future issues. From this early beginning, there is just enough mystery and immediate next steps to keep the audience engaged, complete with a shady villain and a surprise trip tag-along. It seems the series will explore the DC universe as Kara travels through it, so the myriad of stories that can come out of that is surely vast.

At the end of the day, “Supergirl” #21 does exactly what the start of a new run should do: it respects and connects with what came before, it treats its main characters with a passion and consistency that is much appreciated and it lays the groundwork for fun adventures ahead. By having such as wise pairing in the artistic department, each page feels like a treat, with open and closed shots delivering a strong narrative style.

Final Verdict : 7.8 – “Supergirl” #21 sure looks set to be a worthy addition to this new era of the ‘Superman’ line of books, with a strong title character in a promising adventure, portrayed in gorgeous art. While the story so far is not groundbreaking in an major sense, its honesty – both in terms of character portrayal and mission statement – will bring readers back for more.