“Superman” #10 is a relevant issue when it comes to fully explaining the lost years that Jon Kent has lived away from his parents. But, despite its beautiful art and emotional moments, the issue struggles to find its balance. 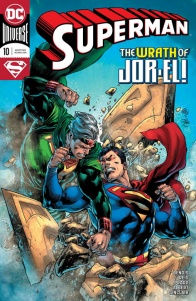 Superman and Superboy venture forth into the cosmos to stop Jor-El before he tips the galaxy into utter chaos. Also, Superman would like to have a word with his father about what happened to his son. All this and the fate of General Zod. “The Unity Saga” continues in the pages of SUPERMAN, named one of the best superhero comics of 2018 by Paste magazine!

Since the “Man of Steel” mini-series and on the first issues of this “Superman” volume, Bendis has juggled the absurd level of action the titular hero faces, with the core family drama Clark Kent experiences with his wife and son. And although this remains true on this issue, it is on the culmination of certain plot elements and reveals that this issue comes up short.

Before that, though, very high praise must be given to Reis and Peterson, who take turns on the drawing duties of “Superman” #10. Usually a problem with monthly publications, their pairing is consistent and well-applied to the narrative. Peterson focused entirely in the sequences set in the past, as Jon escapes through Earth 3 and interacts with his grandfather, with Reis delivering the fewer pages set in the present, as Clark, Lois, and Jon reconvene in the present. Their art styles are not polar opposites, so while readers can certainly observe the back-and-forth shift, it is not jarring and ends up contributing to telling which parts of the story happen on each occasion.

Both Reis and Peterson excel on big action. Their page and panel layouts understand the rhythm of zooming in and pulling out further to reveal the large canvas. Peterson is particularly effective on showing the escape sequences from Superwoman and the moments with Jor-El, with a particular lettering effect from Josh Reed bringing a smile to long-time readers. And Reis, so known for his big splash pages, is much more subdued this time around, his skills translating in emotional moments with the Kent family, applied to very good work on facial expressions and body language. If those sections of the issue were silent, the audience would still appreciate what father, mother, and son are going through.

Colours by Alex Sinclair tie all of that together, ensuring that the consistency across Peterson and Reis art is established and providing an unique visual flair to the entirety of “Superman” #10. Energy signatures, the outer space, the multiple different creatures: all of them receive a gorgeous coat of paint.

In terms of character moments, Bendis is at his usual best environment, providing many heartfelt conversations and situations that further explore the themes of family and the special relationships that a being of such power can actually have on his mundane existence. It works really well, especially when taken in the broader context of “Superman” and “Action Comics:” these are characters that are growing and developing, despite their decades-old existence and familiarity with readers.

Having said that, the evolution of Jon’s Kent secret history seems content on painting by the numbers, offering familiar situations and failing to capture some of the possibilities this scenario could present. Although the contrast of Ultra-Man and Superwoman to Superman and Lois Lane (their doppelgängers on Earth 3) is an interesting play on the father and mother figure dynamics, it plays out mostly as a novelty, rather than something carrying substantial meaning. Jon fully understands these are not his parents so, other than their facial similarities, there is limited shock to the experience. On the other hand, the trauma on being incarcerated for so long is glossed over, with readers apparently led to believe everything is normal and procedural on the life of a superhero’s son. Adding trouble to this situation, what could have been a tapestry for future stories, truly narrating the coming of age of a boy in the middle of incredible circumstances, is shunned, with a very contained and limited tale left on its place.

“Superman” #10 is an odd issue: its art is beautiful, page in and page out. Even the individual moments of these characters, their interaction and emotions ring true and build on top of what came before, and hint of what may happen next. But, at the crux of the plot, readers experience a story that feels unimaginative, whose few deep possibilities being rushed over in favour of an arc resolution. It rings of missed opportunities.

Final Verdict: 6.3 – Beautiful, emotional, and…flat. “Superman” #10 stumbles to tell a dynamic story for one of comic’s most powerful facilities, leaving behind a taste of what could have been.