The choice of a new God of Apokolips leaves more apprehension than resolution, though not without a mixture of hope with its dread. 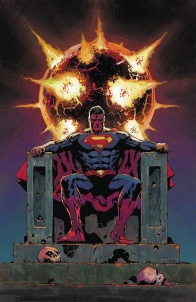 “Imperius Lex” finale! Votes begin to be cast in Kryptonian blood as Apokolips’ hordes of hellish residents choose a new leader to occupy Darkseid’s throne. The Man of Steel finds himself caught in a violent democratic battle with Lex Luthor leading the race for godhood.

As the Superman Family’s trip to Apokolips comes to a close, Patrick Gleason and Peter J. Tomasi pour on the attention to family, with each member, from Superman to Lois Lane-Kent to Superboy to Lex Luthor, showing their worth.

Gleason and Tomasi have done a very good job of discerning what makes the nuclear family of the Superman family tick, even with the addition of Lex Luthor on the outside. The family dynamic is important in how each member of the family is intent on protecting one another, especially once Luthor is taken out of commission. Gleason and Tomasi show how the parents of Superboy have a humorously typical relationship with one another and their son, down to Lois telling Jon that they are not keeping another dog when leaving.

Some members of the cast get their moments to shine. Superboy develops some skill with leadership (admittedly over dogs, not people), along with the aforementioned complaining about not getting to keep a dog. Lois manages to show off some high level combat ability (admittedly to the point of stretching credibility for even a military brat like herself), along with keeping in mind her love for her family above any attempts to seek power. Superman himself has a speech about hope, one that resonates even as it can easily be thrown into doubt by it being told to the citizens of Apokolips, who are often at each other’s throats even without their New Gods. Ardora and her people have their time, both to save a life and to talk about their perspective as the mundane civilians of Apokolips.

Unfortunately, not everyone gets a lot of focus. Kalibak and Granny Goodness fight well enough, but are ultimately relatively one-note in this issue, merely being “those villains to take down” with minimal characterization, unlike prior issues in the storyline. Lex Luthor barely has anything to do, barring his rant near the issue’s end. In fact, Superman himself doesn’t contribute much to the fighting early on.

The attention to Ardora’s people, including her archetypical blind prophet, is interesting enough, as a good continuation from Luthor’s plot in “Justice League: Darkseid War.” The conversations between the prophet and Ardora showcase some of the mystical aspects of the Fourth World, as well as the civilians’ adherence to brutality and a need for conquest above all else. Through their representation, Gleason and Tomasi demonstrate a known obstacle in the way of ensuring peace on Apokolips: the history and culture of the planet itself. Even if a higher power aims for a nicer way of life, it is unlikely to last long at all, as the “lowlies” of the planet are highly likely to be at each other’s throats without a strong leader to keep them in line. In fact, any hope instilled by the finale is likely doomed to failure on this principle, as even a benevolent leader will only be followed for his strength, rather than his inherent goodness or appeal to the people.

The main development from the arc seems to be not even what happens on Apokolips itself, but the story beats afterwards. Gleason and Tomasi’s writing of the tense scene shows the flaws of both Lex Luthor and Superman, and does a good job of setting up further stories, presumably including their part in “Doomsday Clock,” including a feeling of dread to counter the earlier feelings of hope.

Doug Mahnke’s artwork is very dynamic, working best in action pieces or close-ups. The lines are thinner in action, more defined to allow for an easier look at the facial expressions of those involved in the conflict. The use of background explosions or soldiers allows for a better focus in on the main combatants, especially the nightmarish face of Kalibak, the disturbed “grandma” air given off by Granny Goodness, the fierce motherly instincts of Lois, and much more.

For close-ups, Mahnke includes age lines and the integration of shadows with the facial models, making them seem all the more realistic. Sometimes it doesn’t quite work, with too many extra lines in the faces that make them seem a bit crowded, but other times it works well to show age, maturity (or lack thereof), and even in some cases, mental instability, such as the closing image of the issue.

Wil Quintana’s coloring showcases the differences between Earth and Apokolips. He uses dark tones for that hellish world of New Gods, as if to show how bad it is in comparison to Earth, with only the bright colors of Lois, Superboy, Superman, and Lex Luthor shining as the beacon of potential hope. By contrast, the bright blue sky and calm atmosphere of Earth shows a moment of peace, a place where people can live without fear, if only for the moment.

Though the issue doesn’t really do much that is likely to last, the impressions of hope and dread remain, possibly to lead into more intriguing storylines moving forward.

Final Verdict: 7.5– A pretty good conclusion to the ‘Imperius Lex’ arc, albeit with some distracting faces and some taint from knowledge of previous attempts to change Apokolips.