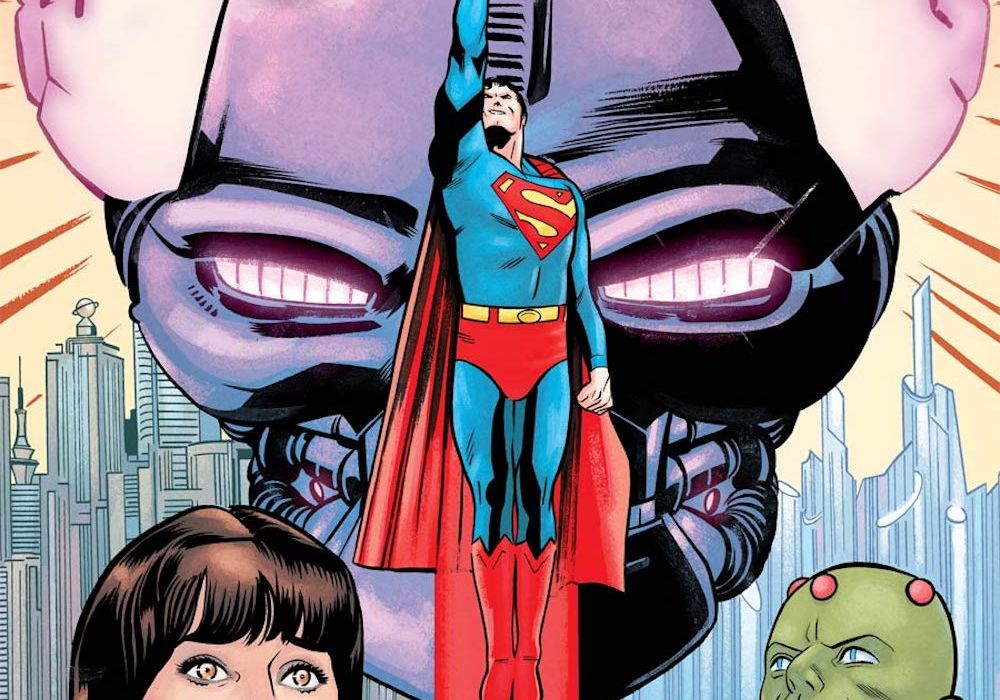 The Blue Boy Scout is here to save the day with a take on the “Donnerverse” begun with 1978’s Superman, entertaining regardless of readers’ prior experience with the property! 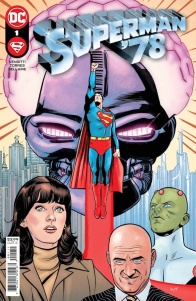 Fly into director Richard Donner’s Superman once more in Superman ’78! Written by Robert Venditti (Superman: Man of Tomorrow) and drawn by Wilfredo Torres (Batman ’66), Superman ’78 tells a brand-new adventure in the world of the beloved film.

A bright, shining day in Metropolis is interrupted by a mysterious drone that crash-lands in the city and starts wreaking havoc. This looks like a job for Superman! But where did the metallic menace come from, what is its purpose, and who is Brainiac?

Despite being a continuation of Richard Donner and Christopher Reeve’s take on Superman from the famous 1978 feature film, Robert Venditti’s writing on “Superman ’78” #1 does not require background information to understand what is going on. On the bright side, this lack of uniqueness serves as an easier angle through which a new audience can recognize the story. On the downside, the lack of things to really make this story pop out make it difficult to really get too excited.

However, in spite of any problems in that regard, Venditti does create an overall inviting atmosphere. The story introduction is simple yet informative, avoiding dumping information on the reader and instead letting the more natural interactions between famous characters speak for themselves. The character personalities are familiar enough, be it from knowing them in other media or just understanding basic archetypes, to know what they are all about on at least a basic level. Clark Kent is unsure of himself, while Superman is confident. Lois Lane is effective, intrepid, and famous, helping Clark along or leading a supportive (but relatively out of focus) Jimmy Olsen toward conflict rather than away. Perry White is demanding but well-meaning to the point of seemingly scaring Clark somewhat. Everyone feels very human in this world (including the one person who is not), implicitly inviting readers to just follow along and not ask too much about how they got to where they are. The effect is so strong that it makes the intrusion of a decidedly inhuman invader from outer space all the more shocking.

While there is violence, “Superman ’78” #1 lacks any real sense of danger, enabling readers to simply enjoy the superhero conflict without stress. In fact, some of the moments of stress are played toward comedic bents, such as a robotic drone implying humans are unintelligent after they shoot at it, or the impending arrest of a purse snatcher. In all, the use of violence by Venditti’s script gives an overall air of being cathartic, calming, and carefree, despite the explosions and massive damage all around.

The main criticism outside of a lack of many elements really made to help the story distinguish itself from others would be Venditti’s use of Superman’s origins, which could theoretically be folded into the same potential problem. There was no need to show the destruction of Krypton from the point-of-view of Jor-El and Lara Lor-Van yet again, as it seems to be of minimal relevance to the present story. Instead, perhaps the same pages could have been used to flesh out Clark Kent or his supporting cast, or to give a brief summary of what had happened in the films leading up to the start of “Superman ’78” #1. Much like seeing Batman’s origins again and again, there is no need to insert Superman’s initial escape from Krypton into the story when the event itself adds nothing to the overall plot. If it ends up being important, so be it, but Venditti seems to use the time with Jor-El and Lara to fill space more than tell a new tale.

While the calming effect may not be immediately apparent in the writing, it truly comes out with the artwork and colors. The two work together expertly to relax the audience and bring them slowly into this return of an older take on the Kryptonian superhero.

The illustrations of Wilfredo Torres are decidedly focused more on slower moments or concentrating focus in on the particular elements of violence, but no matter how it is done, it all utilizes a thin pencil. The resultant impression from such a light hand is that no matter how bad things seem in “Superman ’78” #1, the artwork does not show any real stress that should be felt by the reader, encouraging them to lean back and watch rather than worry for the heroes of the story. There are exceptions, such as those around the apparent villain if this arc, but wider shots with exception of important motions or facial expressions from Clark or the attacking robot seem to be a way for Torres to say there is nothing to fear despite the beginning chaos.

Aiding those thin lines are relatively soft colors brought forth by Jordie Bellaire. Deeper tones do occur around the assailant and perhaps with Superman’s costume, but overall Bellaire complements the already relaxing artwork and inviting script with a softness taking into account the essential essence of Reeve’s Superman in that 1978 film. Even the destruction of Krypton is given a soft light, though perhaps harsh in its own way, hardening to a time long past that, while sad, is of little consequence beyond basic acknowledgement that it occurred. The sole exception comes with the on-panel appearance of the apparent true villain who had sent the drone, who has cooler colors to a darker shade. Separate from the Earth and its protector, this entity is darker despite the colorful palette used, sinister in a way that life on Earth at the time seems to be so far lacking, looming over them as a future threat.

Final Verdict: 7.0– This most recent take on the Superman story is calming and fun, but doesn’t really take advantage of being part of an existing universe in any meaningful way.