Last month I took a look at the first act of DC’s late 2000’s revamp of the Legion of Super Heroes, “The Lightning Saga.” Now I’m ready to dig into the second act. “Superman and the Legion of Super Heroes” is not only my favorite part of the trilogy, it’s also one of the finest, most well rounded Superman stories I’ve ever read. If you need justification for such high praise then please, read on. 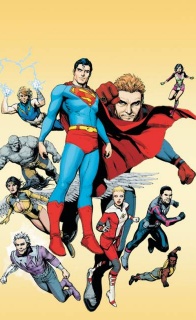 Superstar Gary Frank joins writer Geoff Johns for a epic story teaming Superman with an adult version of the Legion of Super-Heroes. When he was a boy, Clark Kent was isolated and alone until he met this teen team from the 31st Century. Today, it’s been years since Superman saw his childhood friends. Why haven’t they returned to visit him? What’s become of the symbol of Superman in the future? And just why is the future so dangerous for Superman? They warned him away, but now he’s determined to help his friends — even if it means his life!

“Superman and the Legion of Super Heroes” shares several of the predominant themes of “Lightning Saga,” particularly those of friendship, loyalty, and sacrifice for the sake of others. In spite of this, “Superman and the Legion” could not be more different than its predecessor. Taking place solely within the pages of a single monthly title (in this case Geoff Johns’ run on “Action Comics”) this story presents a more singular creative vision. In a rare feat, the story is crafted by a single writer, penciller, inker, and colorist, allowing a unified style and tone throughout.

Concerning style, Gary Frank’s tenure on “Action Comics” featured a Superman that is clearly modeled after Christopher Reeve. It’s well known that Johns previously worked for Richard Donner and subsequently collaborated with the director on his “Action Comics” run, shaping the series in the image of those films. Such strict adherence to an established look may be off-putting to some, but the ties to the Reeve-Superman fits tonally with the story. Less easy to excuse is the odd, almost plastic expressions that Frank often gives his characters. In bonus character sketches contained in the collected edition, Frank expresses a desire to experiment with a “leaner, hollow cheek” design. While this design works for some, most often the male characters, others come across as wild eyed, doll-like, or aged. The young Clark Kent, for instance, at times looks more like a senior citizen than a boy.

Odd choices in facial design aside, Frank’s vision for the the Legion and the 31st century wondrous. His re-imagined designs for the now adult Legionnaires feels true to both their origins and their current states. Similarly, colorist Dave McCaig utilizes a palette that is somehow both dark and moody, yet vibrant. The team’s ability to craft a scene is nearly impeccable, leading to some particularly gripping action sequences towards the end of the volume.

Just as the smaller creative team allows for a cleaner product compared to the army of “Lightning Saga,” the focus on a single hero, rather than two large teams, allows for a more accessible story. “Lightning Saga” feels quite bloated and meandering compared to “Superman and the Legion,” with its tighter pacing and clearer focus. While “Lightning Saga” touches on Clark’s strong history with the Legion, it’s here that those seeds bloom fully, demonstrating just how vital each is for the other. The sort of humanizing character beats that Johns is known for pervade each chapter, such that you feel some degree of connection to even the smallest bit player. While there’s certainly a focus on character, the narrower focus belies a scope that arguably eclipses that of “Lighting Saga.” While that story was, at its core, a mystery, “Superman and the Legion” is a political thriller, one that places the fate of galaxies at stake.

The story begins with a juxtaposition of the archetypal Superman origin. Spurred by the legend of the Krypton’s Last Son, a desperate family sends their child to the safety of 31st century Earth. Johns has used this type of device more recently in his collaboration with John Romita Jr. on “Superman” and as with that story, things don’t quite go as planned. The Earth of this time is a dystopic, xenophobic nightmare, built on a distorted and corrupted version of the Superman mythology. Johns’ use of the Superman legend as a basis for moral and/or political agendas mirrors the real world use of religions and creeds for similar reasons. By tweaking a few key aspects of the message, those in power are able to create a world that is in every way in opposition with the message’s progenitor.

It’s with this idea in mind that Johns and Frank begin to strip down Superman to his core, highlighting his defining aspects. One argument that’s constantly leveled against Superman is his unrelatability. Some argue that he’s just too powerful, such that no conflict ever feels compelling or challenging. While I’ve always though that basing a hero’s value on how easily he can win a fist fight is inherently flawed. To prove this, Johns strips Clark of his powers, just as folks like Greg Pak, Aaron Kuder, and Gene Yeun Lang are doing in the “Truth” story arc. Stories like this get to the heart of the matter, it’s not the powers that make Superman super but rather his humanity and his goodness. Of course, there will be some that argue that Superman’s virtuism is just as much a stumbling block as his cold breath and x-ray vision. That’s an argument I’ll never quite understand, but as it’s one that’s not directly addressed by this story I’ll table it for another day.

While “Lightning Saga” gave a tease of the Legion through a core, seven member team, “Superman and the Legion” blows the doors open with a cast numbering in the dozens. Using concise caption boxes to detail character’s heroic and civilian identities, home planet, and signature power, Johns is able introduce readers to the large cast without sending them running to Wikipedia in droves. Sure, you might get your Wildfire’s crossed with your Sun Boy’s, but for the most part that aspect of the story is relatively painless. Following in the darker tone of “Lightning Saga,” the 31st Century that this Legion inhabits bears the grittiness commonplace in modern re-imaginings. While the world isn’t quite so wholesome and the characters a bit more worse for wear, the core tenants of the Legion remain. The aforementioned themes of loyalty and camaraderie pervade. Perhaps more-so than even the Justice League, the Legion is presented as an unwavering fellowship, a group wholly dedicated to a common cause.

While those themes are all important, it’s arguable that they aren’t the primary focus. Rather, the idea of acceptance and rejection dominates the story and leaves the strongest impression. As an immigrant himself, Superman represents the marginalized, the other. By contrasting Clark’s humble days in Smallville to both his legendary future and his relationship with the Legion, Johns and Frank create an inspiring message to anyone feeling unimportant or forsaken. It’s an “it gets better” message wrapped in tights and magic rings. Furthermore, the way we deal with exclusion is addressed through the dichotomous Substitute Heroes and Justice League of Earth.

Moral of the story aside, this wouldn’t be a Geoff Johns comic without strong nods to continuity, particularly within his own body of work. The titular lightning rod from the previous act is featured prominently by Brainiac 5. Its true purpose is only vaguely suggested, accompanied by the ominous allusion to the “Crisis of the 31st Century.” Fans of Johns’ work on “Green Lantern” may notice a character with a strong connection to then burgeoning emotional spectrum. There are also a number of references to past Legion stories, such as the “Magic Wars” arc that preceded the “Five Years Later” era.

As a piece of the greater Legion of Super Heroes meta-fiction, “Superman and the Legion of Super Heroes” succeeds at both building an intriguing world and filling it with compelling characters. As a singular work, the story stands leaps and bounds above its predecessor, delivering a well paced and complete story arc. However, while things may seem neatly wrapped by story’s end, there are still a number of tales to be told. Next month I’ll delve into this story’s final act, “Legion of 3 Worlds,” in which the Crisis of the 31st century begins and mystery of the lightning rod comes to a head!