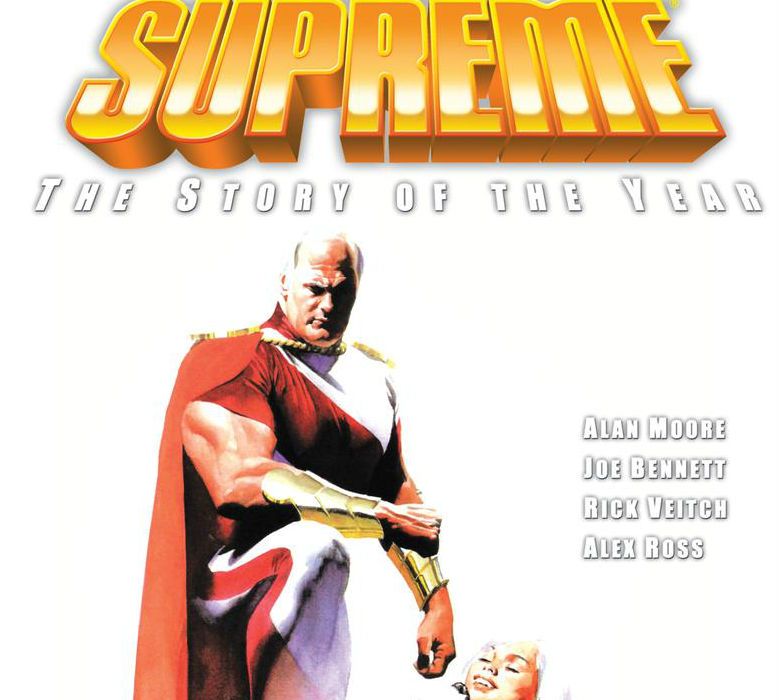 There are few things that can be said about Alan Moore that haven’t been said somewhere else, and probably more eloquently than I can manage. Most of those words, though, have been written about his darker, deconstructionist works. “Watchmen” is undoubtedly a classic, tearing super heroes apart, showing the seams at which the super hero fantasy fails. But, if there is one thing that “Supreme: The Story of the Year” proves, it’s that there was a time where despite all of Moore’s later words to the contrary, he not only had an interest in super heroes, but understood everything good about them in a way that few writers are able to capture. 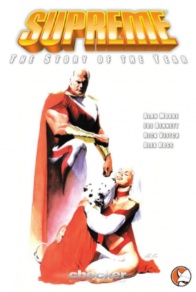 Supreme began his life as Rob Liefeld’s take on Superman. For his first forty issues, Supreme was violent, egotistical, and everything one would expect from an “extreme” and “edgy” Superman archetype. To be fair, I’ve never read any of those issues of Supreme, but from the synopsis I’ve read online, I don’t have any interest in them. Especially not after reading Moore’s take on the character, which started in “Supreme” #41 and threw out pretty much everything about the character that had come before. Moore’s stint on the title would run for a total of 21 issues, the first twelve of which are collect here as “Supreme: Story of the Year.”

The story begins with Supreme arriving back on Earth after a long stay in space with amnesia. He realizes that the world is transforming around him, fading back and forth between different realities, still in a state of flux still unsure of what its final shape will be. We soon learn that Supreme himself is much the same way. After being accosted by a group of other, different Supremes, we learn that our hero is merely the latest in a long line of Supremes, and that the world around him has recently gone through a revision. The reason our Supreme doesn’t remember his past? It literally hasn’t been written yet.

The meta aspect of this book, addressing the revision and the world as it is created around Supreme, is the corner stone of this run. “Supreme: The Story of the Year,” is as much a story about super hero stories as it is a story about super heroes. After the first issue, where we are introduced to Supreme and his alter ego Ethan Crane, following issues all take on a similar structure. Supreme encounters some enemy from his past, or goes back to one of his old haunts, and then within the issue there is a flashback to an older encounter with whatever the modern Supreme is involved with.

The flashbacks are the highlights of this collection. Loving pastiches of all sorts of different eras and artists. While the art of the present-day storylines shift between many different artists, all with pretty standard nineties style, the flashbacks are almost exclusively drawn by Rick Veitch. It’s almost funny, but the pastiche sequences done by Veitch hold up better than what, at the time, was the modern art work. The flashbacks have a timeless quality to them. They both feel of the time they are patching, with just enough of a knowing wink at their own ridiculousness to keep them interesting.

While these flashback sequences work, the modern-day parts of the story are a little bit lacking. The art of the modern segments of the book is very much in the same vein as much of the work that came out of Rob Liefeld’s Awesome Comics at the time. The men are all very muscular, the women look like they will probably have pretty serious back issue in their near future, and when not in action, the characters are pretty stiff. Since we are now more than two decades removed from this book’s creation, the modern sequences almost work as their own kind of pastiche, with the tropes of nineties comics on full display in the modern segments. The keyword in that sentence being almost. Moore’s script seems to be aiming for something more than the artwork in the modern segments can quite achieve. There are many quiet, character-based moments in the adventures of the modern Supreme that fall a bit flat because of the artwork, and it’s a shame.

For the most part, though, these problems don’t detract enough to harm the story too much. They are not able to remove the punch of Moore’s script, which over the course of “Supreme: The Story of the Year” do almost the opposite of the works Moore is most famous for. While “Miracleman” and “Watchmen” deconstruct the archetypes of their characters, ‘Story of the Year’ has Moore creating an entire history and background for a character almost whole cloth. It rebuilds the myth of a super hero, a work of reconstruction that almost argues for all the things that deconstructionist pieces argue against.

While a story like “Watchman” shows the reader what might happen if taking super heroes too seriously is taken to its logical extreme, “Supreme” shows the opposite. If we allow super hero stories to be what they are, silly and heartfelt and hopefully, then they can be used to create something worthwhile. “Supreme: The Story of the Year” is an exploration of not just of a Superman pastiche, but of what super heroes can and should mean to their readers.

It’s too bad that this collection is so difficult to acquire. While it’s possible to buy it on Amazon and other book selling websites, it is out of print, and the prices can run a little bit high. Digitally, for some reason, the collection is not available on Comixology, though the individual issues can be found on other sites. Personally, I was lucky enough to find a copy of this trade in my local library. But, for fans of Superman, especially something like “All-Star Superman,” that tackles both who the character of Superman is, as well as what our relationship to Superman stories are, Alan Moore’s work on “Supreme” is something that is definitely worth hunting down and checking out.