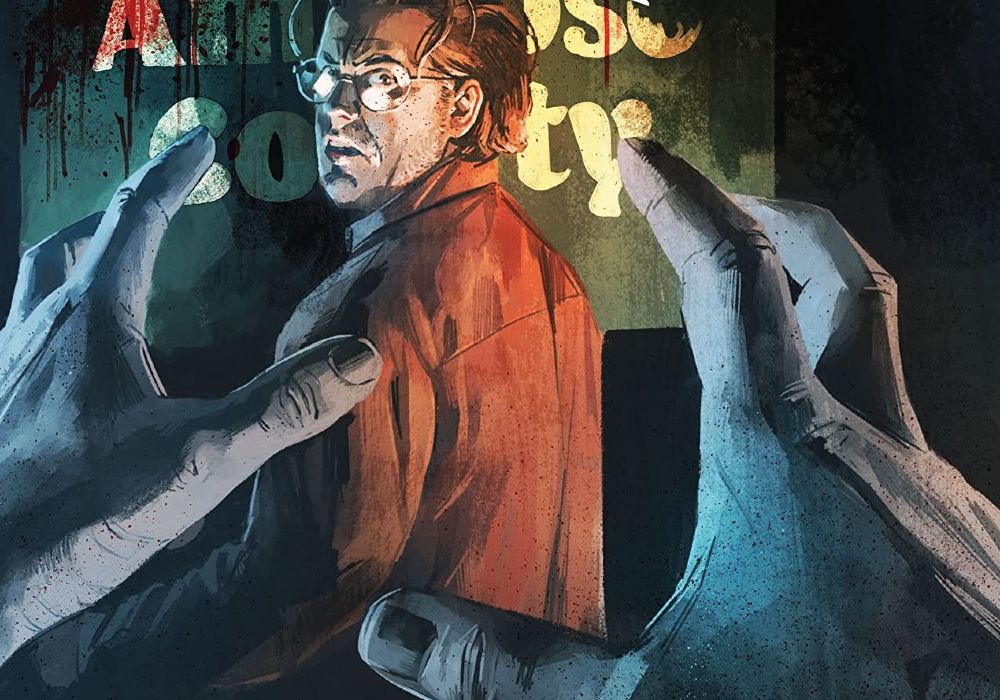 “The buzzards are hungry, and waste no time.” This line of dialogue, said by by a nameless officer, is more or less how “That Texas Blood” #2 begins. Joe Bob, the soft yet quintessential I’m-too-close-to-retirement-for-this-shit sheriff, responds to the other officers on scene with similar West Texas stoicism: “No, they do not.” He looks up to the sky, where a flock of black birds circle in wait. The corpse at Joe Bob’s feet lies unceremoniously, one bloody hand outstretched toward the sky. This is how much of “That Texas Blood” #2 unfolds — in head nods, sighs, and laconic aphorisms. This is to say that the storytelling in this comic is at the same time both incredibly plain yet subtly cryptic. Every scene, every shadow in “That Texas Blood” #2 speaks multiple languages: context, subtext, and then finally the words spoken. As the pages turn the layers of meaning open up. When I read “That Texas Blood” #2, I found myself nodding at the turn of every page, adding my own Joe Bob tinged “yeps” as things started coming together. Truly, Condon and Phillips have found their footing in this issue, and have built a world that’s all face, no facade. 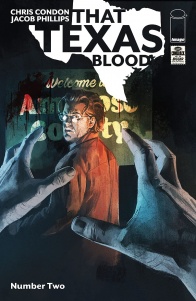 “A BROTHER’S CONSCIENCE,” Part One.
The first five-part story arc BEGINS HERE! Los Angeles-based writer Randy Terrill returns to his abandoned home of Ambrose County, Texas after the sudden and mysterious death of his brother Travis.

When we reviewed the premier issue of “That Texas Blood” last month in Wrapping Wednesdays, the problems were that things moved too slow, and that wordy dialogue took up most of the comic’s space. Still, there was a kernel of potential in the story worth following. It’s good to see that in “That Texas Blood” #2, the story widens, more characters are introduced, and that most of those misgivings have been wiped away. The kernel of potential is now fully popping into something that’s a little True Detective, a little No Country for Old Men, and a little Shakespearean tragedy. The caveat here is that for some, “That Texas Blood” #2 may still move a little slow.

But when we talk about slowness in comics, what do we really mean? Often times, it means a lack of action, a lack of character development or plot movement. In general, it means things not happening. In “That Texas Blood” #2, things happen, we just don’t get a lot of answers. Much of the story follows Randall Terrill as he returns to his old Texas home, there to deal with the aftermath of his recently deceased brother, Travis. As he travels through town with a reticent nostalgia, the folk respond in varying tunes. Some are oblivious to who he is, but most give him the side eye or straight up curse him out for the sins of his brother and family. For some, this might be frustrating — one of our main protagonists spends most of the story wandering around getting yelled at, without giving much back. However, “That Texas Blood” #2 works because Randall really does feel oblivious, and we feel for him. Condon builds the tension until Joe Bob intervenes, and as readers we’re sucked in. What happened to Travis? Like Randall, Like Joe, we want to know. It gnaws at us as the story continues. We don’t get answers, that’s for sure, but we get a hell of a good story.

Phillips’ art and coloring fit the story perfectly in “That Texas Blood” #2. He used long, vertical strokes of overlapping color on nearly every panel, which gives the story a heat shimmer, almost mirage kind of effect. This makes sense, the Texas of “That Texas Blood” #2 feels hot and oppressive, and like a mirage, a little far off and a little mysterious. There’s also a minimalist aspect to the set design in “That Texas Blood” #2. The town we’re, apart from a somewhat garish hotel, is sparse in terms of scenery. Phillips works with everything he’s given, elevating everything he gets his hands on. For example, he effectively plays with texture in the generic main street diner, turning the porthole window of the kitchen door into a great visual. One of the best panels in the story takes place here, as we see Joe Bob and Randall through the hatch marked glass of the porthole window. Through the grid-like pane, the two look like they’re both caught in cross hairs and chopped up, dissociated into uncomfortable uniform pieces. It’s uncanny. Are we reading too much into it? Maybe — but that just goes to the strength of the setting, and the wold Condon and Phillips have built.

“That Texas Blood” #2 feels fully baked, and satisfyingly complete despite the many open mysteries. Condon has put his heart into the story, and it shows. He even dropped a playlist to accompany issues 2-6, which you can find here (it rocks). There’s so much care to every aspect of this story. No image is wasted, no character beat unnecessary. Everything in “That Texas Blood” is building toward something. We’re walking down main street, peaking out at the horizon. It’s impossibly flat. We should know what’s coming — people here speak their mind, and nothing’s obstructing our view. But alas, we do not. It’s tantalizing, and I for one cannot wait to be blindsided by whatever Condon and Phillips are brewing.

Final Verdict: 8.9. Immersive and bold, “That Texas Blood” will resonate with anyone thirsting for a full bodied, neo-western noir.