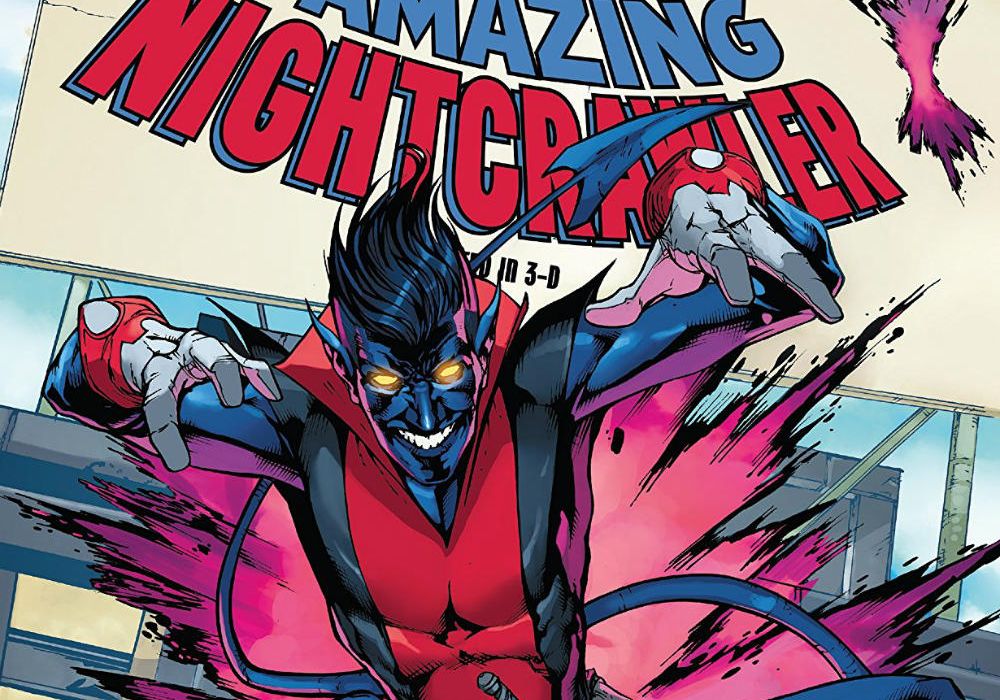 “The Amazing Nightcrawler,” as a limited series, aims to expand the new reality of ‘Age of X-Man’ by focusing on a beloved X-Men character and giving him the spotlight – in comic publishing and within the story itself – he deserves. However, as the creative team falls short on bringing truly innovative ideas and displays to the table, it can come across as a bit of a missed opportunity, at least on this debut issue. 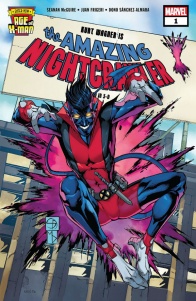 ENTER THE AGE OF X-MAN!
From the Munich circus to Hollywood Boulevard, Nightcrawler is starring in his own solo series!
Kurt Wagner is the biggest celebrity slash super hero since Dwayne Johnson!
Juggling Kurt’s responsibilities as one of the X-Men and a slate of summer blockbusters would be tough without the best support staff in the business: Stunt coordinator Magma! Personal trainer Kylun! And of course, his leading lady Meggan!
But there’s something rotten in Tinseltown…

Kurt Wagner has been born a mutant, his blue velvet fur well in display from the moment of his birth. That led him to be persecuted, chased and threatened by the world, in a way that is usually associated with violent mutants, bent on aggression and world domination. And yet, for all of this apparent destined design, Nightcrawler has been a lively, fun, adventurous member of the X-Men, and one who fared better when this duality is played on the positive side.

What McGuire, Frigeri and team try to do on this first issue, is to frame that violence into something that opposes Kurt’s life in this alternate reality. In here, these moments are scenes in a movie that the famous Nightcrawler portrays, while his real life is filled with glamour, red-carpet events and enjoyment. He is a mutant who succeeded, who has little to fear other than his own self-doubts and frustrations against what Nate’s Grey reality asks in terms of compromise for this comfort. It reads well on paper, but there are some fundamental flaws on how it is executed that might prevent readers from truly enjoying it.

First of all, Frigeri struggles a bit with facial expressions and more intimate moments, which is essentially where “The Amazing Nightcrawler” focuses the most on this first issue. Sure, there are some action-oriented situations, especially towards the beginning, where Frigeri can flex more of the muscles he is apparent more at home with. However, when Kurt, Meggan, and the rest of his supporting cast exchanges conversations and debates, the narrative becomes limited as emotions fail to land. More than that, there are a few instances where different characters look and behave so similarly that it might cause some pages to be revisited for a better understanding.

Sánchez-Almara on colors is very supportive on the drawings and compensates some of the lack of distinction that some pages would present otherwise. His craft is more vivid in two aspects. The contrast between the opening sequences (set in the filming of the movie) and on the rest of the issue really demonstrates the “fake darkness” versus the bright and positive real-life for Kurt. Additionally, his work on power signatures and flashy mutant abilities does wonders on telling characters apart and to push the action forward.

McGuire’s script and plot is an interesting aspect to review. The writer surely wants to pay homage to past stories and situations Nightcrawler found himself in over his decades-long comic tenure. Elements like his adoration of Errol Flynn and his pirate swashbuckling adventures take center stage (and also make little background appearances) throughout the issue. The hints to Kurt’s romantic entanglement with Meggan are tightly linked to the seminal Claremont’s and Davis’s run on “Excalibur.” And even the overall proposition that in this reality Kurt has become everything that he could be, harkens back to the storyline reserved for Miss Marvel during the ‘House of M’ saga.

However… this is precisely where the overall tone of the script and how it associates with the character of Nightcrawler is challenged at its heart. Sure, Kurt does seek adventures, romance, and thrills. But he was never one to walk away from danger, or to settle in a life of luxury with modest displays of heroism. Perhaps this is exactly what this first issue is setting up – a massive disgust to how he is living his life – but it fails to provide enough hints that its titular lead wants to move away from it. Surely, there is one plot element (which shall remain unspoiled for this review) that provides the segway for that, but the nature of this element is so specific, and lacking a broader understanding of Nightcrawler’s psyche, that longtime readers of the mutant teleporter might fell unease.

Other than that, McGuire does provide interesting moments on the narrative, snippets of the personality the audience has come to expect from Nightcrawler. His idealized movie version is daring and charming, his use of powers inventive and collaborative. The dialogues among Kurt and his support staff over at the movie studio works well, and it is funny, if not interesting, to witness some mutants behave in such a different scenario that what they are usually shown at (pay close attention to the Stepford Cuckoos). And how Nightcrawler worries about a certain fan hallway through the issue once again shows an instance where the hero’s true persona comes forth.

All in all, “The Amazing Nightcrawler” still has to find its footing to deliver a complex enough story that presents the duality of getting what one wishes for… and how that is often far from one’s true heart’s desire. While not bad in any way, with competent visuals and strong grasp on dialogue and pacing, this debut issue does little to amaze and unfortunately does not present a lot of what readers might want from Nightcrawler.

Final Verdict: 6.9 – For it to be truly amazing, this series should refocus on what truly makes Nightcrawler such a beloved hero, paving the way to the debate as to why this constructed reality is far from utopic.