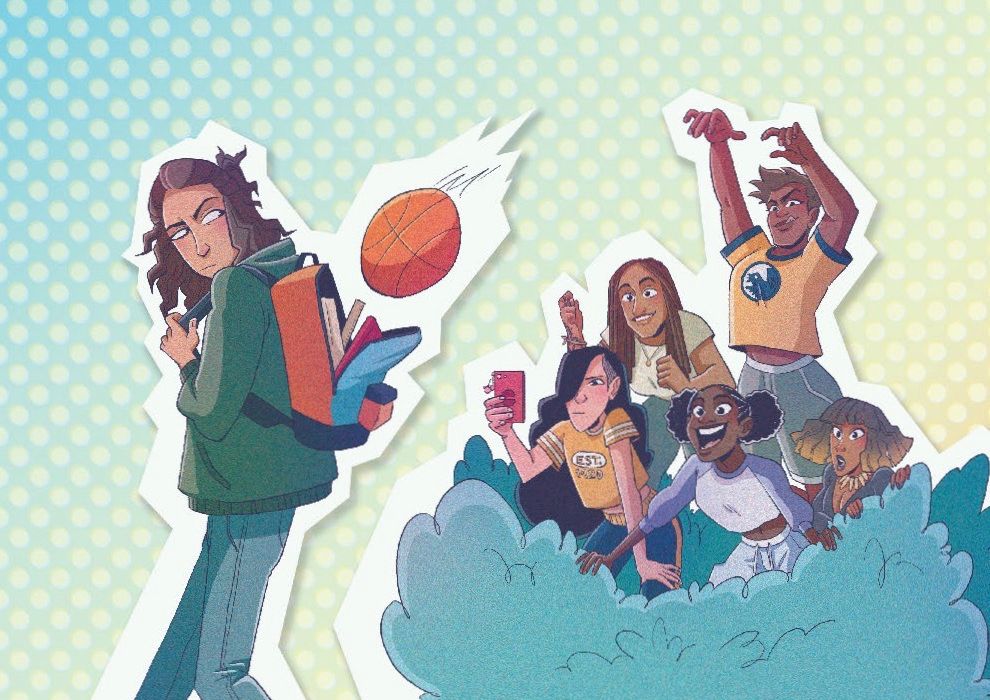 Writer Carly Usdin has a knack for creating quirky ensemble casts and writing witty one-liners, but the Pop Art inspired look is what makes “The Avant-Guards” #2 unique. 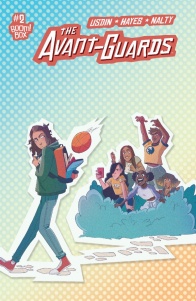 Charlie is done with team sports. Nope. Not happening. Never again. But Liv and the rest of the Georgia O’Keeffe College of Arts and Subtle Dramatics basketball team are determined to get Charlie to join them, and they’ve cooked up a ruse to woo her! For basketball. Nothing else.

The overlap is barely a page-and-a-quarter length, so it’s certainly far from tedious or overwrought, but it sets up a distinctive “made for TV” vibe right off the bat. From the dialogue to the shape and pace of the scenes to the broad character types that comprise the ensemble, “The Avant-Guards” often feels more like a sitcom or dramedy somewhere in your Netflix queue than it does a comic book. That’s not necessarily a bad thing – as writer Carly Usdin’s bio tells us, she’s done plenty of buzzworthy work as a writer, director and showrunner for clients like Funny or Die, CollegeHumor, Amy Poehler’s Smart Girls and TruTV – but it can make everything seem a bit more like a Hollywood pitch than a fully finished, creatively realized product. Like it’s a comic book masquerading as a TV pilot. Thankfully, the writing is clever enough to keep you turning pages and the artwork simply killer.

In terms of the plot, it’s really quite simple. Unless the Avant-Guards can recruit another player, their inaugural season of NCAA Division IV women’s basketball will be over before it even begins, since they won’t even have a full team. Naturally, that final piece of the puzzle, and potential new recruit, is none other than Charlene “Charlie” Bravo, an enigmatic film student who “transferred from State” because she “couldn’t stand it.” Why? We don’t yet know, just like we don’t yet quite understand her sudden aversion to basketball, despite having played in high school, as well as her former college. In any case, the race is on. As the book begins, the team’s irrepressible manager-slash-coach, Olivia Bates, and the rest of the gang have just 24 hours to seal the deal and convince Charlie to join the team.

Here’s where the fun begins. Usdin’s witty banter keeps things moving along as Olivia works overtime to lock Charlie down, for the team and . . . maybe more? Peppered with quotable one-liners like, “Did you get that joke from a popsicle stick?” and “You look like the heart-eyes emoji,” the script is flat-out fun, accessible and breezy. Usdin also does a great job both creating rather quirky, offbeat character types and letting them own who they are as they introduce themselves.

Speaking of those introductions, unsurprisingly they’re facilitated by Olivia, who literally wrote the book on icebreakers. “It was a high school project and New York Times bestseller,” she says, not so much to brag as to underscore that simple fact. Anyway, they proceed to go around the table, and first up is Ashley, who claims to “sing like Beyonce, party like Rhianna and ball like LeBron.” Next up is Tiffany, the wannabe witch, who works at a crystal store and relentlessly recruits for her coven. Then, Nicole, “the resident cynic” and finally Jay, whose singular attribute (other than tattoos up and down one arm) is “they’re quiet.” It’s a little bit formulaic, in that everyone is unique in their own special way, but it’s refreshing enough that it works.

Visually, from the overt and oversized Ben-Day dots on the cover to Rebecca Nalty’s sherbet pastel color scheme, the book is a Pop Art inspired gem. Noah Hayes’s lines are fluid and assertive with characters that pop off the page, standing our from their color field backgrounds or minimalistically rendered settings. It’s all about expressions, body language and style – and each character has plenty of that.

Illustrations aside, the book also has a really great design. It’s hard to know exactly how roles and responsibilities break down between all the artists – including Ed Dukeshire on letters – but things feel very cohesive and completely in line with other Boom! Box titles like “Dodge City,” “Fence” and “Slam!” They don’t all look the same, but it definitely feels like there’s and over-arching aesthetic or implicit “house style” and it works really well.

For now, the series could be considered a little light on plot, but with the introductions out of the way and a solid ensemble cast assembled and ready for action, there’s great potential here and this book looks like it will be a lot of fun.

Final Verdict: 7.7 Snappy dialogue and great art drive “The Avant-Guards” #2, stylishly setting the stage for what could be a really fun series.