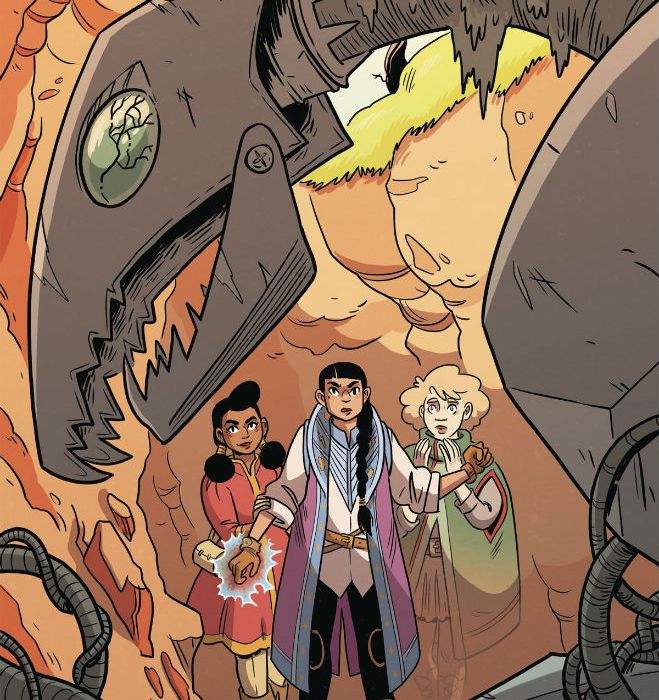 “The Castoffs” #1 is a somewhat patient book. It takes its time getting started. Only a few points in the solicits actually occur in this issue, and the creative team are only marginally interested in digging deep into the mythology of this world. Instead, we get a science fantasy comic that feels born of a love of the genre and of role-playing games. It’s more focused on group dynamics and relationships as well as upending preconceived notions, and is all the more engaging and special for it. 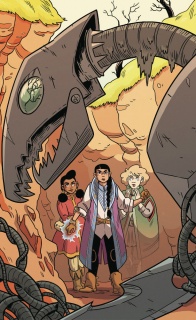 It’s Mage against the Machine! Magic vs technology in Roar’s newest mini-series. When three apprentice mages are sent to help a neighboring guild, they reignite a decades-old war with a robot army that has destroyed the world. Brian Smith, New York Times-bestselling author (“Stuff of Legend”), teams up with M. K. Reed (“Americus”) and artist Molly Ostertag (“Strong Female Protagonist”) on a thrilling new fantasy adventure!

I’ve started to feel like there’s been a strong tabletop RPG influence on a lot of the recent all-ages fantasy flair. It’s as if creators have been calling on their time playing Dungeons and Dragons or Pathfinder or the odd Star Wars game to craft their stories. Obviously, since these games rely on a lot of the tropes and conventions of the genre, so the plot lines and arcs are never entirely unique or whatever. The personality and voice of the piece, therefore, comes more out of the group dynamics and interactions. The characters act and react differently, and there’s this sense of randomness to the material. Maybe it’s because I’ve just started listening to The Adventure Zone and remain a huge fan of Campaign, or maybe it’s my obsession with Adventure Time, whose creators are open and honest about their dungeon crawling experiences, but I’ve noticed a lot of these elements and interactions in “The Castoffs” #1.

Published by Roar Comics, a division of Lion Forge, and written by M. K. Reed and Brian Smith with art by Molly Knox Ostertag, “The Castoffs” starts like a long, involved campaign. A secret message is delivered late at night to this headmistress or head wizard or something. The task is perilous but unavoidable, so she picks a few choice students and sends them out. There’s contentions, naturally, as the girls set off toward dangers unknown and don’t necessarily see eye-to-eye on how they should be operating.

They’re barely even out of their village before they start bickering. Reed, Smith, and Ostertag go out of their way to give them distinct personalities. There’s an authenticity to their behavior. For instance, the warrior girl immediately assumes she’s in command, causing the other girls to mutter to themselves, “Don’t you just hate a goon who thinks she’s in charge?” Another one is notoriously clumsy, while the third bears some mysterious power involving her voice.

The artwork is animation-ready, easy to get absorbed in, and quick to tell the story. Ostertag doesn’t go overboard with the detail in her character designs — which are distinct and malleable — or her backgrounds or color choices. The details she does choose to incorporate are great, from the floating candles around the headmistress to the specific costumes and clothing. She provides some basic shadow and flats work in the colors, making “The Castoffs” #1 aesthetically pleasing and completely immersive. It’s not flashy, emphasizing serviceable storytelling techniques, and delivers a nice sequential narration.

Reed, Smith, and Ostertag also gradually reveal information about their world. The stuff about this great war between magic users and machines. We’re, of course, given this expository and dreamy sequence where the creators bring us up to speed with what’s going on, but it’s far more interesting when they leave these remnants in the background. When the remains are strewn across the road. When we get a hint at what happened and the lingering consequences of that. For as much as I liked the backgrounds and designs, I wish there had been a better hint of that. The world of “The Castoffs” still feels like it’s being sketched out rather than having been inhabited for a long while.

Of course with its hidden histories and deep mythology, what we mostly only gets hints about what’s happening. “The Castoffs” #1 doesn’t feel like an opening issue but more of an opening chapter. Like Roar was given a full length graphic novel and decided to split the thing into 20-page digestible segments. Reed, Smith, and Ostertag are willing to take their time with the material, to let it develop and unfold as it will. While that helps the pacing of the comic, it doesn’t necessarily leave a single reading experience. This is a book I’m going to have a lot of fun reading in its serialized format, but one I don’t think will sing until it all has been collected together.

With its subtle world-building and strong focus on character dynamics, “The Castoffs” #1 makes for an intriguing and engrossing read. It’s nice to look at, easy to get absorbed in, and offers plenty of dangling threads for you to grab onto a follow. It’s a strong introduction, if not a strong single issue, but I, for one, cannot wait to see how the rest of this unfolds.