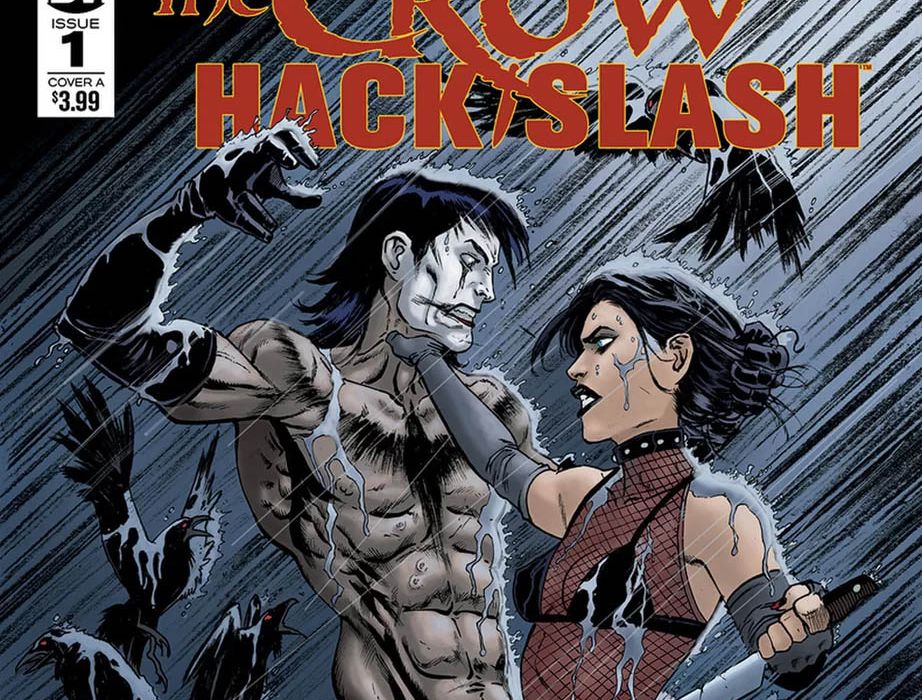 Look in on the first issue of Tim Seeley’s dream project as the crow flies with Jim Terry. 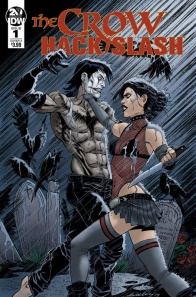 The crow flies.
A soul is brought back.
But something is wrong.

Angeles Cero won’t stop killing on her quest for revenge, and the bodies are piling up.
Now, slasher hunter Cassie Hack and her monstrous partner Vlad are on the trail of the Crow Killer, assuming her to be one of the masked murderers they’ve hunted for years.

But they aren’t the only force trying to make the universe right again.

Whenever Tim Seeley brings up a new series, he is very good at encapsulating the bare essence of said series in its first issue to attract readers both new and old. This assessment is especially true when it comes to crossing his horror epic “Hack/Slash” over into new franchises, particularly when it comes to brief miniseries such as the recently concluded “Hack/Slash vs. Chaos!” at Dynamite Entertainment. For both his original horror hunters and the famous franchise being included, he does his part to introduce everyone in a way that will not only explain the premise of the duo, but also a very brief look into the franchise with which they are connecting. Just as it was true in “Vs. Chaos!,” it is also true in “The Crow: Hack/Slash” #1.

Just enough information is given about “The Crow” franchise for newcomers to understand. Some new kind of mystical being tied to revenge, an affiliation with the aforementioned corvids, an obsession with black and white, et cetera. Not everything is explained, but at the same time, not everything needs to be, as Seeley’s choice to take the perspective of Cassandra “Cassie” Hack and Vlad, both not experienced with the powers of the Crow, but having their own encounters with vengeful beings from beyond death of various sorts, allows the plot to go through with intentional misunderstandings to traditionally tragic effect.

The use of secondary characters, of victims and the like, is well handled, with Seeley providing just enough characterization to allow readers to feel bad for the potential deceased before their nigh-inevitable demise (given the genre of choice). Whereas some other writers might just throw the victims into the meat grinder, the use of the supporting cast allows for better understanding of our protagonists and their responses to the suffering of the comparatively innocent, demonstrating their heroism alongside their unscrupulous methods, maturely and carefully utilizing adult themes of drug use and vigilantism along the way. The fact that said responses act alongside some humorous moments as well doesn’t hurt either.

In all, Seeley’s writing style allows for some serious emotional whiplash that leaves readers wanting more, and absolutely shows why he had wanted this crossover so badly.

Jim Terry’s artwork on “The Crow: Hack/Slash” is some of the best in the entire saga thus far. It is brutal, yet realistic. Thin, yet expressive. Close-ups are very disturbing, with very intricate looks in on eyes in particular. From a bloody pool under a corpse used to hide an eye of the face of a violently murdered woman to the tormented gaze of a killer to a look of terror on Ms. Hack’s face as she is faced with a potential killer to the nearly glowing eyes of a crow, the eyes are a main focus point in general, even using heavier line work to show a “sunken” appearance for both the restless living and the equally restless dead.

The looks at the supernatural are only rarely seen up close, and never used as the main focus. From a breath of crows to whatever force caused the creation of the new Crow and more, the focus remains on the mundane rather than the fantastic, with behavior like common sleep or a look in on marks from injections of illicit drugs providing a much closer look to showcase how down-to-earth our protagonists are at their core. Even when there are looks in on grievous injuries, their stark realism shows well to demonstrate how unnatural the affilicted person is by comparison.

Terry makes excellent use of body language and facial dialogue in his art style. From some confident posturing in calmer times to enraged glares and taut muscles, everything about the highly emotional stakes. From rage to sorrow to terror and more, everything in the artwork’s emphasis helps give an impression of trying to protect those who have little desire to protect themselves, and the very human people who do their best to accomplish that goal. Even the peace of sleep is made ever calmer by way of how the sleeping individuals are drawn, from a lock of hair to a somewhat humorously scrunched nose to snort.

Aiding the body language to portray its realism is the effective use of shading. Terry utilizes an intricate shading pattern that not only helps to show the source of light very well from a wide variety of angles (including light from the side while looking face-to-face), but also to give architecture some added definition on its tiling and brickwork to add some liveliness to the world in a way that many other artists may overlook.

Meanwhile, Terry also works the colors with equal expertise. The sharpness of both the reds blood spilled and the icy blues of Cassie Hack’s eyes each remain especially distinct, while the two-faced visage of Angeles Cero itself marred with anguish that contrasts against the light brown tones and yellow claw-like attachments on each fingertip. All of these decisions work alongside the less sharp, but no less effective oranges and greens associated with Vlad, or the haunting reddish orange of the crows’ eyes.

The only real downside in “The Crow: Hack/Slash” #1 is some trickier work with the lettering provided by Neil Uyetake, whose style used for Vlad is the same as everyone else, in spite of previous lettering in the epic having his words with a rougher font than the rest. Still, that is just a minor peeve for people who are well aware of the saga’s history, and is unlikely to have a negative effect on newcomers.

Final Verdict: 8.0– Though perhaps not as comedic and callback-heavy as “Hack/Slash vs. Chaos!” #1, “The Crow: Hack/Slash” #1 shows that this creative team is an excellent fit for the horror crossover.