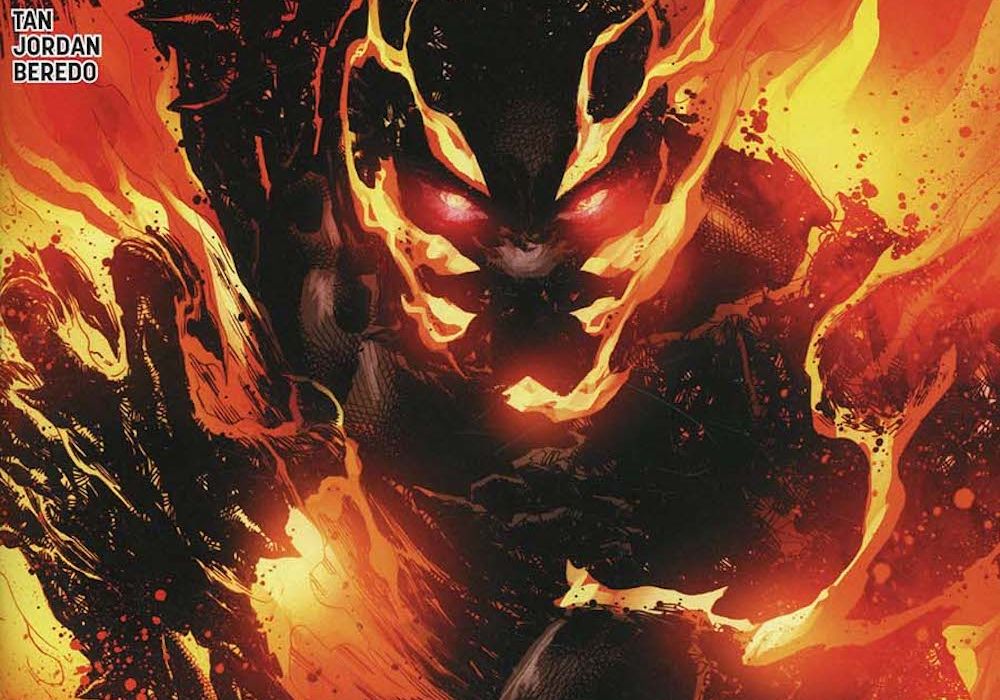 Though seeming to be DC’s latest answer to Marvel’s Ghost Rider, “The Curse of Brimstone” #1 seems promising enough to separate itself from the competition. 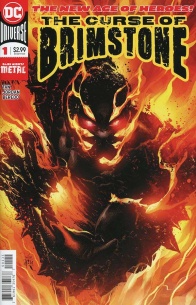 Joe Chamberlain would do anything to save his small, forgotten town—even make a deal with the devil. But things get worse, and Joe finds himself cursed with the power of BRIMSTONE. With the power of fire and destruction coursing through his hands, Joe must now track down and destroy the demon he made his deal with before the power he now wields destroys the town he was trying to save. But as the fiery pain inside him grows, can this young man overcome his own demons before his power rips him apart from the inside out?

“The Curse of Brimstone” seems to be the latest foray into supernatural horror by DC Comics, following books like “I, Vampire” and to a lesser degree “Justice League Dark,” and Justin Jordan does a pretty good job of beginning to develop the world around York Hill, albeit more in line with being somewhat unnerving and depressing than outright scary so far.

As with many properties of the “Big Two” publishers, readers can very easily draw some rather significant similarities drawn between this property and one of Marvel Comics, in particular Ghost Rider. A Faustian bargain gone wrong, an attempt to save something through that deal going horribly wrong, an infernal agent with a silver tongue, and hellish powers? The parallels are nearly impossible to miss.

That said, it isn’t all the same, and Jordan makes a genuine attempt to separate this incarnation from its relative counterpart in Marvel. Here, the emphasis is far more on horror, and less on super-heroics, or demon slaying, at least with this introduction. Joe Chamberlain is also much more down-on-his-luck, desperate for his entire town’s wellbeing, rather than only that of a family member. Instead of giving much focus at all to the powers themselves beyond the closing moments, Brimstone, the eponymous supernatural alias, only shows up at the very end, to breathtaking effect (to be discussed below). Furthermore, the agent of the “Home Office” seems more similar to an associate of Angel‘s Wolfram & Hart occult law firm than a high-ranking member of his organization like Marvel’s Mephisto. These differences help to give “The Curse of Brimstone” its own identity, albeit one formulated from examining its similarities to other properties beyond the most obvious one.

Jordan’s depiction of York Hill makes it out to be a thoroughly depressing place to live in modern times. While places in the DC Universe’s Earth like Gotham City or Bludhaven are awful in their own way and infamous for their crime rate, they at least felt alive, and people at least had jobs, even if they were forced into crime to have them. They were bad, or had pitiful lives, but they at least had something to do, something to which they could ostensibly look forward. Even Annie, Joe’s sister and the apparent spark of hope for his life, is only seen that way because of her education leading her out of York Hill. As Jordan portrays this new area, it is so run-down, so has-been, that even the infernal powers of the Home Office seem to pick it out for the express purpose of finding someone as dissatisfied with their life as Chamberlain, and the protagonist rightfully admits that if it disappeared, nobody in the DC Universe would even care or notice.

Due to the run-down nature of the setting, most of the figures that would in other works be viewed as antagonistic or unreasonable come across as merely pathetic, such as Joe’s infirmed father. Even While Annie picks up the nicer side of the town, the agent of the Home Office manages to make up the difference by being a well-written, manipulative, cerebral menace, a demon with a silver tongue who has no trouble twisting words or withholding information that is not explicitly asked for until things are far too late.

Philip Tan does an excellent job on the artwork. The soft lining helps to add a sense of liveliness even in such a decrepit location, with a much firmer hand and more defined features when characters or scenes are put into more focus, such as facial close-ups. Tan’s copious use of blurring in his pencils helps to give an air of realism, such as in the case of objects too close or too far to be seen clearly if they were in live action, or figures in smoke. More realism can be seen with the use of a blurred focus through the glass of a car window, the refracted light working much like it would in real life. This all leads into the use of the supernatural, which, even with Brimstone himself, is portrayed in a real-yet-unnatural way that makes it mesmerizing to look at.

The real draw of this issue has to be coloring, provided by Rain Beredo. Every color is soaked in a blend of the natural and the supernatural, the horrific and the mundane. Depending on the scene and the context, a brilliant color like Joe’s blue eyes can show either a spark of humanity or a failing of hope itself. By that same token, the soft brush on manages to use similar colors to opposing effects, from orange hair to supernaturally red eyes to a mix between the two for what appears to be truly hellfire and more. The use of darker colors helps to contrast violently with the brighter ones in certain scenes, giving a true sense of the internal, physical conflict and agony of the mystical forces at work.

How far can this story go? How well can it distinguish itself from the competition? Time will tell, but the opening to the tales of York Hill definitely looks promising, especially with the combination brought to the table by this creative team.

Final Verdict: 7.5– Though derivative on the surface, “The Curse of Brimstone” brings together fantastic artwork and colors with a heart-wrenchingly real mundane story to create a memorable experience.