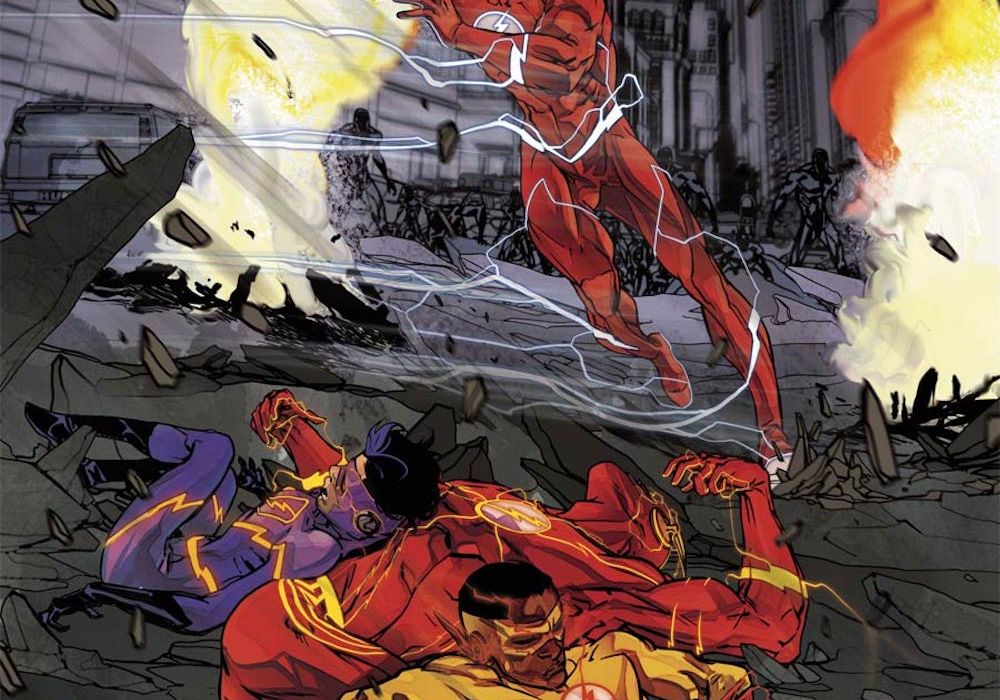 As Central City is in time-stopped chaos, ‘Perfect Storm’ continues with attention especially focused on the different members of the heroic family, both literal and figurative. 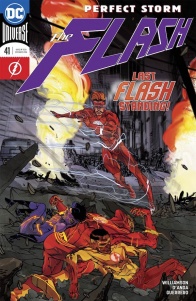 “PERFECT STORM” part three! The Flash has lost what he prizes most of all and must call in an old ally to protect Central City while he sets out to get it back…Wally West! But with a new Flash protecting his city, will Barry be willing to cross lines he never crossed before?

As a book, “The Flash” is very focused not only Barry Allen but also the rest of the Flash Family. This use of the entire group is particularly notable through the ‘Perfect Storm’ arc going on now.

There isn’t much time spent on the members of Black Hole, but Williamson still has these villains’ presence felt throughout “The Flash” #41, primarily through the interactions and conversations of the three heroes.

Williamson utilizes all three Flashes very well, drawing on their strengths and failings. The older Wally West seems to act as the conscience to Barry in his role as the temporary Flash of Central City. On account of his personal experience with the rogues gallery far beyond the younger Wally (hereafter to be known as Kid Flash to make distinguishing easier), he knows at least part of what Barry is going through in terms of the psychic manipulations of Grodd, and wants to help him out. Williamson uses the opportunity of the connection between the two older Flashes to showcase both Wally’s loneliness and Barry’s vulnerability, both physically and psychologically.

Meanwhile, the two younger Flashes, the Flash of China (Avery Ho) and Kid Flash, show their relative inexperience. Avery acts as a good jumping-on point of sorts for any new readers to the series, given she has been spending most of her time in “New Super-Man” (re-dubbed “New Super-Man and the Justice League of China” as of issue 20), which is on a completely different continent than Central City or Keystone City. While acknowledging her experiences with the Flash and Meena Dhawan, Williamson also shows what she is not aware of, namely the older Wally West who is himself an American Flash.

Meanwhile, Kid Flash serves as a voice of hope, perhaps to the point of naïveté. While even the older Wally is kind, he is still filled with doubts about his place in the world now that he has taken to pretty much being nothing but the Flash full-time. On the other hand, Kid Flash still sees more good in people, even his villains, which could be well-founded or not, but is sorely needed with Barry as bossy as he has become.

Speaking of our depowered hero, Williamson uses Barry Allen’s newly depowered state to shine a spotlight on his insecurities. The Hannibal Lecter-esque monologue by Grodd one issue ago seems to have struck even deeper than the theft of the vast majority of his connection to the Speed Force, and Williamson gives him a darker turn of sorts. Not quite as dark as the ‘Negative’ arc, but his obsessive, antagonistic need to get his powers back verges on addiction, to the point that he makes a particularly amoral decision in the latter pages.

Carlos D’Anda is marvelous on the artwork, dynamic where possible while intentionally, uncannily static at the same time in other places. When the Flashes move, their speed is palpable, even when they are not directly seen. This speed is demonstrated through blurred forms when compared to those not moving, the common lightning that trails behind Flashes as they run, and in some cases, lines of electricity that lead off panel and do not actually show the speedster, in demonstration of how they are too fast to see with the naked eye for most people. A more humorous way of showing super speed is in overlapping images of the same person, such as having Wally hand a man some flowers he dropped. Disorienting, but amusing nonetheless.

A particularly interesting element is D’Anda’s use of juxtaposition in panels. As Wally saves Central City’s citizens, Barry is stuck working on the lightning rod. Wally’s happy attitude, though interspersed with depression and self-loathing on some level, has a high degree of dynamism, with the aforementioned shows of super speed all around. However, every other panel is instead showing the human-speed Barry working on the device, a much more methodical, slow process that has absolutely no narration whatsoever, as if to show his obsessive concentration and how this issue is far more the story of the other members of the Flash Family.

Luis Guerrero makes expert uses of color to help elaborate on the time-stopped situation in Central City. With exception of those who can move, everyone is shown in muted colors, nearly identical to their surroundings. By contrast, each Speed Force or Negative Speed Force user has his or her own, specially colored lightning. Wally has his light blue, Kid Flash his red, Avery her yellow, Negative Flash her purple, and more, to help keep them separated even when they are moving so fast (as mentioned above about whether or not they can be seen). The uses of color help to draw attention to certain images even more than most normal-time comics would be, and help to keep attention on the superhuman beings.

Together, the writing, art, and colors are sure to leave readers waiting for more in this exciting plotline.

Final Verdict: 7.5– A character-focused issue helps to distinguish the different Flashes while giving only minimal attention to the villains.