There have been many “heroes versus heroes” storylines from publishers over the last couple of years. While it is surely entertaining to see fan-favorite heroes going at it, those events can come up short if the motivations behind these differences are too contrived or not meaningful enough. With that in mind, it is certainly a pleasure to read “The Flash” #47: what Williamson, Porter, and team have delivered is a very strong opening issue, tying past, present, and future plot elements into a story that is pure heart and emotion at its core. 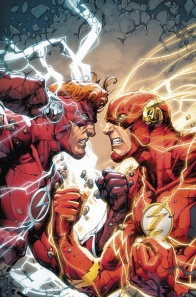 “FLASH WAR” part one! Barry Allen and Wally West…at war?! The long-rising tension between mentor and former sidekick is brought to a head when the Renegades of the 25th century come to claim Iris West for the murder of Eobard Thawne…but that’s only the beginning of a plot that will change the future of The Flash forever! By the end, it will be Flash versus Flash in a mythology-shaking event!

‘Flash War’ promised an action-packed, no hesitation battle to fans of the scarlet speedsters. Despite their history together and the ensuing camaraderie, Barry Allen and Wally West surely have some ironing out to do on their relationship. This is present on the very opening of the issue and that tension is masterfully built up as pages progress, going through a crescendo that culminates into a climatic . . . well, more on that a bit later on this review.

Howard Porter brings his usual talent to the wielders of the speed force, and his familiarity with the mythos, actions styles, and, even more importantly, character interaction is a key component of this issue. There is a lot to enjoy from his drawings and multiple readings will reveal further details and nuances, especially on how each character views and reacts to the events around them.

First of all, what Porter does with the Flash family and the Renegades (the time police force from the future whose powers are based on present-day’s Rogues) is kinetic to say the least. Movement lines, disguised as lightning bolts or other similar energy signatures, are used to infuse each page with a very fast pace. Panel designs are dimensioned to keep momentum going: note how Porter shifts between sequences of smaller panels into larger ones and then back again, letting the battle between rivals become relentless. And without going into spoiler territory one particular Renegade and the powers that are displayed, well, are surely going to draw smiles from DC fans.

Porter equally excels at character moments. Be it’s in the opening pages where readers can see desperation on Wally’s face and hopelessness on Barry’s, or during a heartfelt exchange between Iris West and the young Wally West (Kid Flash), there is a lot to be understood from motivations on detailed expressions alone. And talking about details: there is a lot of secrets held by these pages, especially on the final third of the book. Pay close attention to monitor screens, trophy rooms and objects littered around the floor: readers might just get a glimpse of what is coming up next.

The main event, regardless of the quality on the art department, comes from Williamson’s script. It is harder to judge this issue as a stand-alone entry, because it truly is a culmination of what the writer has been doing since the beginning of this run, almost 50 issues and an Annual ago. One could even make the case that this story actually draws from the very beginning of this not-so-new DC era, with one specific panel harkening to the seminal “DC Rebirth Special.” And still, despite being a complex book with multiple plot elements weaved through, Williamson does pull off the juggling act. Even factoring time-travel, Renegades, multiple Flashes, multiples Wallys . . . this is ultimately a story of how far are you willing to go and how protective one can be.

Dialogues are very strong, even if at times they are used to inject minor exposition to the story. Those are few and far between so they really don´t damage the narrative flow, even if they are perceptible to long-time readers. Despite of that, there are some truly defining moments there, from the issue’s very opening page, to how Iris explains to Kid Flash the complicated relationship between Barry and Wally and even on how Barry tries to be the voice of reason when the Renegades arrive in the present.

But it all really comes together on that last page review (no spoilers here). When fans start the issue and observe the complete wreck of a relationship between Barry and Wally, just to read the caption that that conversation is happening merely 48 minutes into the future, they might be taken aback thinking “what could possible drive this?” Similar to that moment from the thriller movie Seven, where Brad Pitt asks “what’s in the box?,” the issue ends with that proverbial box being wide open. And readers will then know that there will be consequences, no matter what decision is ultimately made by the speedsters. It is heartfelt, it is unavoidable and it builds expectations to the rest of this event like a first issue should.

Final Verdict : 8.3 – The beginning of an event done right, “The Flash” #47 builds on years of plots in a story held together by beautiful art and characters that ring true due to sharply written dialogue and nuanced facial expressions.